End of the Middle of the Village 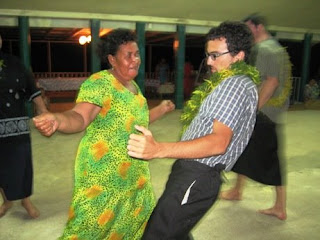 What's up, party people? I have no idea whether the pseudo-microblogging was well-received last week, but I figure it's the best means I have for summing up long internet-less periods of time. So now that we're back in Apia and I've had my first hot shower in 26 days (nearly 4 weeks for those who are keeping track at home), here are more fake twitters from the past week, or so:

1:58 p.m. My time at the internet cafe runs long and I end up taking a taxi in order to make it to our 2:00 session on time. $3ST to travel a distance I could have walked in 8 minutes. Sucks.
4:52 p.m. We say goodbye to Laura, who greeted us when we arrived at the airport, had a hand in our Life and Work training, and is now back in the continental United States. We'll miss you, Laura!

8:45 a.m. Thungs get slightly testy and competitive within the group after a village-themed scavenger hunt. Also, try translating Proverbs 4:7 from Samoan into English under time constraints. Hell, try communicating "the book of Proverbs" to someone who doesn't understand English. Hell, just grab the bible yourself and try to find it. I dare you. You figure Matthew, Mark, Luke, and John will look somewhat familiar (Mataio, Maka, Luka, ma Ioane), but Proverbs?! That's tough.
1:15 p.m. It rains. HARD. For over and hour and a half. It almost makes it pointless to have class when we're literally shouting over the roar of rain on the tin roof above us.
2:08 p.m. When 2 people from another class join ours for the afternoon, I am randomly selected to teach them what our class has learned so far. So I get up and my lesson flows pretty naturally despite being completely off the cuff and after, my teachers says, "That was pretty good. Were you ever a teacher?" I guess I was. Kind of?
10:00 p.m. Numb3rs again. I don't know why.

10:02 a.m. I am more affected by our discussion of locus of control than I thought I'd be. This is a deep topic and the confines of a microblog make it an inappropriate forum. Let's talk about it sometime soon in its own blog entry.
1:05 p.m. It rains. HARD. For over and hour and a half. It almost makes it pointless to have class when we're literally shouting over the roar of rain on the tin roof above us.
10:00 p.m. Mele breaks out the dominoes. Samoan Dominoes turns out to be much like a very simple version of Mexican Train.

10:48 a.m. During a language session specific to our long-term assignments, we're told the Samoan translation for computer window is "komepiuta polokalami," or literally, "computer program." It seems to me that we should use the Samoan word for window, "fa'amalama," because why make students conceptualize something in a second language and not conceptualize it in the language that is familiar to them? I'm teaching my kids to call them fa'amalama.
12:02 p.m. It rains. HARD. For over and hour and a half. It almost makes it pointless to have class when we're literally shouting over the roar of rain on the tin roof above us.
9:05 p.m. Peace Corps trainees use the staff projector to watch "Lock, Stock, and Two Smoking Barrells" in a public setting less than 10 yards (ans well within earshot) from the Congregationalist church's bingo night. While "LSATSB" is brilliant cinema, it is also rather profane and very violent. This made things awkward for me, sitting with my family at church bingo.

8:00 a.m. Today is the 45th anniversay of the JFK assassination. Sad.
8:34 a.m. I am otld we're going to the family's plantation to gather coconuts.
11:34 a.m. After hours of reading and catnaps, I realize we're not going to the plantation afterall.
7:38 p.m. Phil's sister, Tuese, works at Coconuts, a high-end beach resort down the road, and tonight I go with Phil and some of his family to watch the cultural show there. There is fire-dancing and traditional singing. The show is nice, but the mostly white spectators are the real spectacle. I have a Toni Morrison moment when I find myself standing outside the window of the restaurant, looking in from the other side to watch the show. We can see Tuese serving tables, and Phil and I wonder what the people at the tables think of her. I tell Phil that I would assum she drove herself here. Phil agrees and says, "Yeah, and she most definitely did not." I'll post a picture of the hotel guests tomorrow.

8:09 a.m. When I wake up, there is a girl doing chores around our house who I've never seen before. When I ask Asolima about her, she says, "That's Lupe. I hate that girl." Apparently Lupe ran away from home, but has been found, and is now living with us as a sort of prison. Or at least I think that's the situation.
2:45 p.m. After Akanese pokes me with a pig spine incessantly for 15 minutes, I pry it from her hands and throw it out the winow of the van as we drive down the road. My host family finds this hilarious.

10:15 a.m. It rains. HARD. For over and hour and a half. It almost makes it pointless to have class when we're literally shouting over the roar of rain on the tin roof above us (Is this getting old for you? Because it's sure as hell getting old for us.).
11:15 a.m. We are given a list of Samoan profanities so we can avoid inadvertantly using them and we can identify them when they are used around us. The weird thing is, the sheet has all the equivalent English profanity. Perhaps there's no other way to convey the information, but it's still a little jarring to see all of it written out. Also, it's pretty funny to split hairs over the definitions of particular swear words. Although I must say, Samoans do get very specific with describing foul smells.

7:04 a.m. The moment I wake up, I realize my digestive system is not happy. The queeziness lasts all day. As does the diarrhea. Yeah. I said it.
12:42 p.m. While having lunch at Phil's because my family has gone to Apia for the day, his family is fascinated when I eat the skin of my mango slices. I swear my host family eats the skin. Or maybe they don't. But I thought they did. In any case, I haven't been too adversely affected eating the skin of my mangoes for the past several weeks.
7:30 p.m. The village's Women's Committee holds a banquet in our honor. After food, an impromptu variety show ensues. It turns out my mom, Mele, is quite the entertainer. She performs in skits and leads the group in song. At one point, she breaks out into one of her standards, "The Twist". And a random lady, who we later identified as one of the teachers who lives in the house behind mine, starts twisting at me. So I twist back. PST Erin got the shot above.

7:53 a.m. I get to school early so I can use the toilets with the running water. Another diarrhea day. I know some of you don't want to know about this, but I figure I'm going to give you the real experience. You'll hear the highest highs and the lowest lows.
12:50 p.m. I am kissed goodbye twice by Mele, once by Asolima, and twice by Akanese. I am loved. 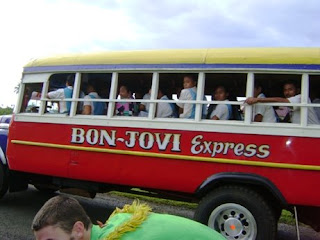 This is the Bon Jovi bus. It comes through the village twice a day. That's Phil ducking so I could take the picture. 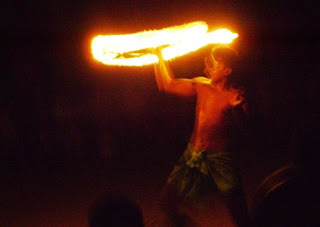 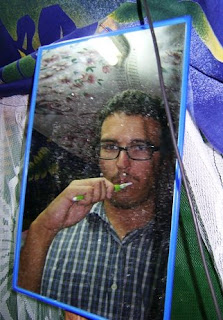 Fun with camera angles and mirrors. Brushing my teeth in my room at night. 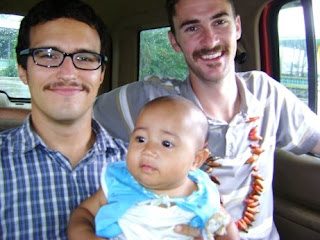 Phil and I starting our new gay, mustachioed family? 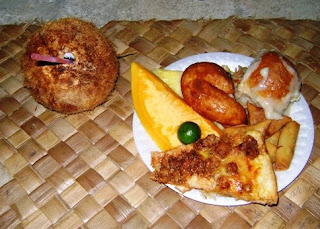 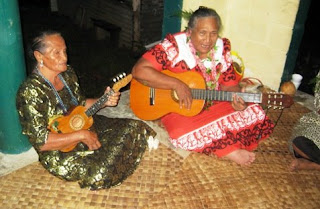 My mom (on the left) and her aunt, who is also Dan's grandma. 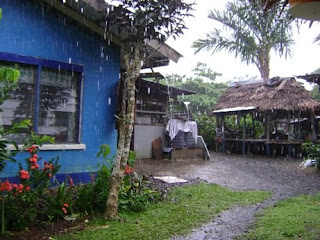 Rain. If you look in the middle of the picture at the two barrells, they've engineered the rain gutter to pour into the family water supply. Ingenious and frightening at the same time. 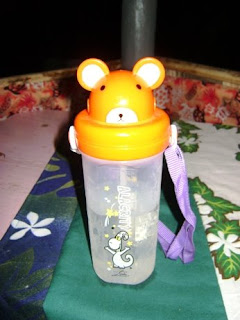 Akanese noticed that a lot of the other Peace Corps have water bottles and I just re-use bottles that I buy at the store. So she made it a point to pick out a water bottle for me on one of the family's trips to Apia. Possible source of diarrhea? 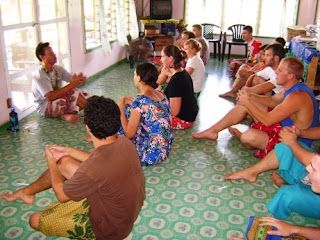 This is fiafia practice. We do a slap dance for the community. Front row is me, K8, Blakey, Erin, Joey(?) and Paul(?). Back row is AJ, Chris(?), Dan, Jordan, Supy, and Phil. I think someone's between Supy and Phil. Maybe Koa?
Posted by Matthew at 5:07 PM

I seriously, seriously can't believe you have a mustache! Hahaha. I love the all the pictures!! The food looks yummy. Sorry to hear about your digestive issues, you know we don't talk abou that in our family!!

I love all the stories. I really love the daily updates! You just made my day! Miss you brotha.

So have you gotten any rain there...hear it rains hard.

Sad news here...we had to put Jack down...never recovered from his seizure a couple weeks ago.

I can relate to the diarrhea stories...I learned quickly to always carry my own toilet paper and scope out where the western toilets were.

we'll miss you for thanksgiving.

Dez, I am loving the moustache!

Happy Thanksgiving Matthew L. We missed you last night during the Martha Stewart screening but it was nice to hear your voice.

I love your blog. It helps me to forget how far way you are!

PS Your hair is super curly in the last picture! Cutie!