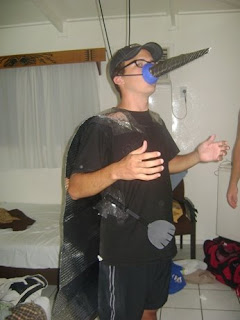 Happy Halloween, everybody! Despite being expatriated, Halloween was alive and well here. While the party that we all attended last night is put together by the Peace Corps, the Japanese Peace Corps (abbreviated JICA, I think?) and the Australian Peace Corps (AusAid?) go all out, and last night's party was a great success.

After our volunteer visits on Tuesday and Wednesday, we all made it back into Apia Thursday morning. As we trickled in different people dd different things. I was able to Video Skype with Luisa from the Cappuccino Vineyard restaurant here in town. Once it was clear on what I was doing, a couple kids from town lined up behind me to watch the screen from over my shoulder. In the little Skype interface, I could see my face with a small crowd building up behind me, and it felt like I was hosting Good Morning America. It was a good time. Video Skype is awesome. Even from a wireless connection. I highly recommend it.

We had short classes on Thursday where we gave short slideshow presentations on our volunteer visits. Friday we had classes in Safety and Security and more training in Teaching. We also took a field trip over to the Ministry of Health to learn about nutrition in Samoa. They showed us their garden, hosted a tasting of different Samoan fruit, and then fed us soup for lunch that they made from the vegetables they grow in their garden. The soup was leafy with a couple sweet potatoes here and there. It was ridiculously similar to Joe's Kale Soup.

Halloween ended up being somewhat of a mad dash. Once classes ended for the day, a number of us got to work on putting together makeshift costumes for last night's party. Blakey led the charge among our group to purchase football jerseys from the local thrift store, and a large part of our group formed a football team. Phil (the tallest in our group) and Supy (the shortest in our group) cut out jersey-knit spoons and went to the party as the big spoon and the little spoon. Dan started out trying to be a mummy with a roll of paper towels that we found, but then switched to making a toga out of hotel bed sheets. I ambitiously set out to be a mosquito; an effort which impressed people, but in execution it proved rather unwieldy.

I made wings out of a silver car visor cut in half diagonally. My nose was a funnel with a paper towel roll stuck to it. I made an extra set of arms out of cheap spatulas, and I made antennae out of a wooden stick that I found at a general store here in town. When the lady at the store saw that I was going to by the stick, she got very suspicious, and asked, "What do you need this for?" I thought for a second about the best way to tell her that I was going to dress up as a large mosquito. Realizing that that cultural chasm would be far too wide to cross, I decided to simply tell her, "Halloween." To which she responded, "Ohhhhhhhh..." And that was that.

In any case, my left wing started falling off almost as soon as we got to the party, and I couldn't drink with my nose piece on, so I quickly lost the wings and the nose and morphed from a mosquito to an ant.

I don't like to talk too much about going to bars and drinking here in the blog because I figure there's not much that I can say to recap that sort of an event. That said, parties like last night's are some of the only occasions that volunteers get to come together and see one another. So as much as I feel like I should just write off last night to run of the mill bacchanalia, I think there is a social importance to the whole thing that would be lost.

When a party like last night's is held, all of the volunteers show up, young and old. There are several volunteers here in their 50s and 60s, and they were all there last night, partying with the twentysomethings. When catching up with one another, one of the most telling factors in a person's Peace Corps experience is how long they've been in country. Batches are referred to by their group number. That is, my group is referred to as group 81, the group that got here in June is referred to as group 80, 79 came in October 2007, etc. It tends to be the first thing you remember about someone after their name. And because the pool of socialites is so limited and because gossip is so inevitably rampant, everyone builds up mental dossiers about everyone else. So interactions at parties and other social gatherings are strange, particularly for newbies, because you run into people that already know lots about you even though you're meeting for the first time. I'm sure that the longer we're all here, the more we'll learn about the people who are already here (we've already learned quite a bit), but still, the whole thing is kinda weird.

In any case, I hope things are great back home. I won't be blogging for a while because we go back to the village this afternoon where we'll be staying for the next 26 days. Yowsers. We're back in Apia the day before Thanksgiving, and I'm sure I'll have quite a bit to tell you then. Be safe, and I'll talk to you all soon! Pictures below! 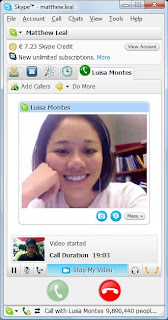 The Skype video interface. Luisa cut her hair! So cute! 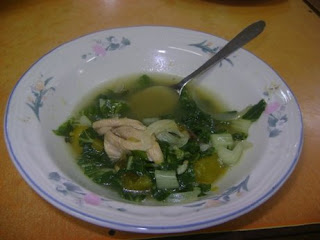 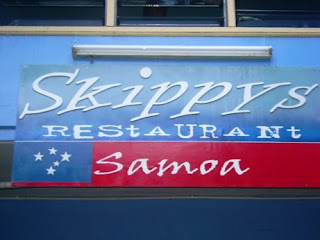 This restaurant has a funny name. We went there for dinner, but it was closed. 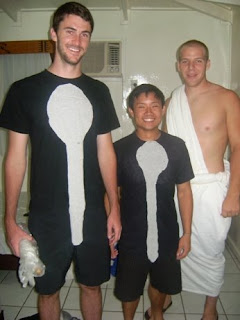 Phil and Supy as big spoon and little spoon. Dan in his toga. 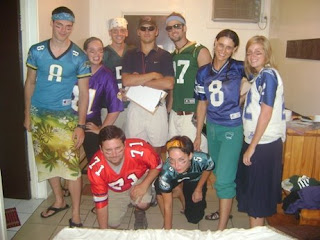 The rest of our group in football costumes. 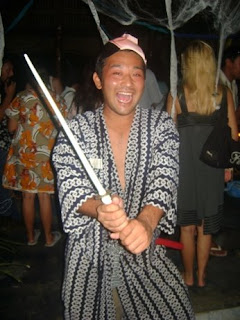 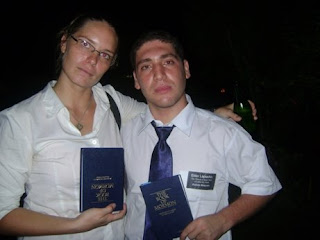 Volunteers Laura and Max as Mormons. Laura held the book upside down on purpose.

There were 2 Sarah Palins. The one on the left is actually Australian. The one on the right was a little more half-assed costume-wise, but she had the accent down pat. I told each of them the awesomely off-colour joke that I heard recently, and when the American laughed, the Australian stared at me and said, "I think the cultural barrier is pretty wide there." Mmmm... awkward. This is the Slimer piñata that Cale made. It was paper mache and awesome.
Posted by Matthew at 10:35 AM

26 days without a post? What will we do? I love reading what you're up to. Your descriptions are priceless. Be safe and hurry back to the computer to catch us all up. We miss you!

P.S. How will you get the election results?

Why on earth would you want to be a mosquito?!? Do you have so many bites that you're starting to morph?

Anyway - guess what we had for dinner last night? KALE SOUP! It's almost as if we had dinner with you - give or take 10,000 miles.

Be safe while you're away and know that you're always in my thoughts and prayers.

One can get educated reading your blog. I had never heard the term bacchanalia before, and Wickipedia had some interesting things to say about it, plus a really interesting picture. Didn't look like your party was quite as rowdy.
Thanks for sharing the shot of Cale's slimer!

how much does it cost to skype in samoa? u had free wireless internet at the restaurant u were at?

skippys is the BEST! they have the best burgers and at a great price!

hah i love the mormon costumes.

Talofa! Just wanted to say hi! The ecivis crew sends you their shout outs! We're following your blog so keep up the good writing! I'm sure if you need some QA assistance one of us can help you out. Check!

Luisa! Come down and visit! Your hair is ridiculously cute!

Matt-choo. I love your costume! You're so creative. Luisa's hair is lookin' good! Fun that you guys got to video chat.

I love the picture of Skippy's!! Hahaha. I was laughing out loud when I saw it.

Hopefully we'll get to talk to you on Tuesday! Have fun in the village!

dude! nice mosquito/ant costume. i was a bee on halloween. our stingers were in very different places... haha.

that story about the ant in your ear and the light... how informative! my mom had an ant in her ear when she was a kid, but she had her nanny smoke it out with a cigarette. another option if it happens again. :)

it's fun to read about how you're doing... hope you are well! peace out.