Christmas in the Nu’u and Beyond 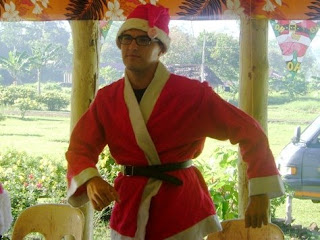 Saturday night Joey, Supy, and I walked for a long time trying to get a taxi home from Jordan’s. I brought up that I am really excited for January and for the holidays to be over. It’s difficult to know when stores will be open, whether buses will be running, and it’s been essentially impossible to connect to the internet. The cafés are closed and the wireless service that I like to use has been down. When I originally wrote this on Saturday, it wasn’t that long. But it’s grown some since then on account of life here continuing regardless of internet availability. Kind of unfathomable. I know.

Phil came last Tuesday afternoon (December 23) and sat bored with me at the Internet café while I posted my last blog. The ferry had been so crowded when he and the rest of the Savai’ians came over that they were forced to stand out on the deck, and all were pretty sunburned. Chris hosted dinner at her place because about half of group 81 (Dan, Erin, Kate, AJ, Chris, Jordan) was staying with her for Christmas. The rest of us (Me, Blakey, Phil, Supy, Joey, Koa, Paul) headed out for Fausaga on Wednesday morning.

Blakey, Phil, and I planned to take the 10:30 bus to Fausaga. I wanted to run some errands first though, which included a quick internet session, finding a toy for Akanese for Christmas, and buying some food to bring my host family. While we waited for the bus, Blakey’s host mom called and said she was nearby. So Phil and I got on the bus, and Asolima called me and said she was nearby. Phil and I filed off the crowded bus and got in the car.

It was the first time my host family had seen my haircut and shaved moustache and I was wearing contacts, and they were shocked. But the feeling was jovial, and they were very happy to see Phil and me. I gave them the mangos I bought, just as I saw that Uncle Laumatia had bought 3 times as many mangos as I had. Oh well.

Uncle Laumatia also bought a large spear gun for fishing, which was precariously pointed at Phil’s head for the beginning of the trip. Phil said it felt like something out of Final Destination. I was embarrassed for Phil for making such a reference. Ha.

Shortly after arriving in the village, Phil’s sister Tuese volunteered to take us to Coconuts resort, where we’d seen the fire dancers a few weeks back. It was fun to see the resort during the day, and most of the guests were out so we hung around with the wait staff. It was a good time. Coconuts is the first in a chain of 4 neighboring resorts, so we walked and saw each of those.

Not too long after, the alarm on my phone went off, which meant it was time to call my grandma’s house where my dad’s side of the family had gathered for Christmas Eve. It was fun to hear from everyone, and I was relieved when Ray told me that there were no new tattoos in the family. Maybe next year…?

After some volleyball and some dinner, it was time for church.

Church started out as it did every Sunday in Fausaga, but after not too long, the Faife’au stopped talking and the youth group took over. There was singing and dancing from the little kids; a nativity play by the tweens, which included the Magi delivering a volleyball; and another play by the older group in which Phil’s sister Tafale played an innkeeper and there was no room for baby Jesus because babies Filipo, Mati, Supy, and Peti were taking up all the space.

Church ended around 1:00 a.m. and tea and butter sandwiches were served.

I am woken up at 6:30 a.m. and told that Uncle Laumatia is dressing up as Santa Claus and delivering toys to children in the village. Whatev. I go back to sleep.

It turns out Laumatia wants a helper. I put on the family Santa suit, which has pants that go up to my chest. I look like I’m wearing Santa’s waders. Also, these pants are crotchless. Once the top is crossed over my chest and I put on my belt, things look okay. Although I have no boots or elf shoes, so I wear flip flops with my heavy felt Santa suit. At 7:20 a.m.

The children sit on Laumatia’s lap, and I hand him a bag depending on the child’s gender. Then we dance. See picture below for how happy I looked when we danced.

After the Santa thing, we went home and I decided to nap. The family followed suit.

I woke up when Phil called and invited me to come to his house.

The most annoying part of the day (besides the aforementioned Santa incident) was that Digicel, the cell phone company used by most of Samoa, had its lines jammed all day. I couldn’t text out or call out until just after 5:00 p.m., and by then, my phone was next to dead.

From Phil’s house, the party moved to volleyball. And from there, my family picked me up and we drove out to the eastern end of Upolu where Uncle Laumatia grew up. It was a long trip, and most of us fell asleep.

I am dragged out of bed at 7:00 a.m. because Uncle Laumatia wants to go to Apia to get a rental car. I have now seen him rent 3 different cars, and I left for 8 days, so who knows what the total’s at now? In any case, we spent the morning in Apia, and nothing incredibly interesting came of it.

On the way home, Asolima bought a 750 ml bottle of Coke and placed it on the center console of the van. As we rounded a corner going over the center of the island, the bottle fell into my lap getting all over my pants and my phone.

I went to make a call when I got back to the village, and after 5 seconds of conversation, my phone died. Coke kills.

Phil’s sister Tuese pushed pretty hard for us (Me, Phil, her) to attend the Siva in Tafitoala, the next village over. Mele put up a bit of a stink before giving me permission to go. I haven’t asked permission to go to a dance since sophomore year of high school, probably. And that was only because I needed a ride. Oh, the joys of the village.

This siva turned out to be quite a bit more raucous than the typical Fausaga Catholic dances that Group 81 came to despise. My camera had died by then, but Phil got some good pictures.

I am dragged out of bed at 7:00 a.m. Uncle Laumatia’s father yells at me and tells me I sleep too long. Is it time to go back to Apia yet?

I replaced my phone. It’s the same model, and I’ve kept my phone number, but alas all my high scores from Nature Park are gone. There was more shopping and chance encounters with each other as we wander back to our respective habitats.

A large group of us lunched at Skippy’s and then some went to see Valkyrie at Magik Cinema. We all rendezvoused at Jordan’s for dinner. Burritos. Tortillas and all. I didn’t think it was possible, but it was awesome.

Supy ended up staying an extra day in Apia and crashing at my place. Paul and Koa stayed at Jordan’s.

A day of firsts.

I manually washed my clothes for the first time ever. I’ve been using the washing machine and dryer since I was fairly young, but I’ve never washed my clothes in a bucket. I didn’t really know what I was doing, and for most of the experience, I was pretty sure I would never do this again. But once the clothes were dry on the clothesline, it was a great feeling of accomplishment. I washed my clothes.

Second first was I cooked a meal in my kitchen. Chris and Jordan dove headfirst into their kitchens with ambitious, exciting meals like stir-fry and cranberry chicken. I have been skeptical and uneasy about my kitchen, choosing to ease myself in with grilled cheese. I was halfway done with the first sandwich when I realized I don’t have a spatula. But I made do, and the final product wasn’t half bad.

Third first was I watched a movie on my computer. My parents sent me “Big” for Christmas (among other things). I love that movie. My favorite quote about “Big” comes from John Mayer as part of “I Love the 80s: 1988”; he says, “’Big’ is the kind of movie where if you come out of the shower and it’s on TV, you just sit there, bare-balls naked, until its over.” True that. Although I was clothed for tonight’s viewing.

So that’s been my last six days here. Hope your Christmases were merry and bright.

Finally, some notes on the blog… Okay, that’s all for now. Lots of pictures below! 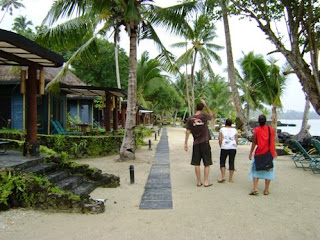 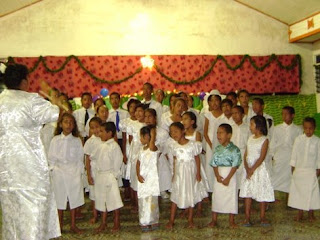 Children's Choir on Christmas Eve. Matatia's face (in the front row wearing light blue) captures the energy and rage with which most Samoan children sing. 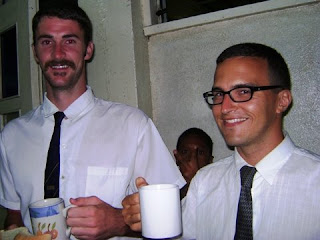 Phil and me after church early Christmas morning drinking tea, eating butter sandwiches, and looking a lot like Mormon missionairies. 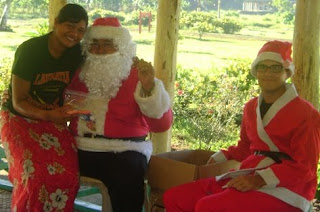 Tafale, Santa, and me on Christmas morning. How fun. 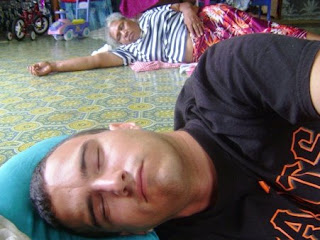 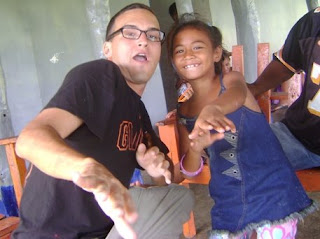 Me dancing with unknown 7-year-old. 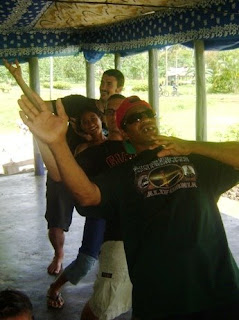 Oge, me, Fipe, and Phil doing a Siva Samoa. Oge is quite the dancer. I really like this picture. 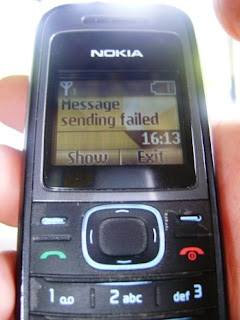 This is the message I kept getting on Christmas when I would try and send text messages. 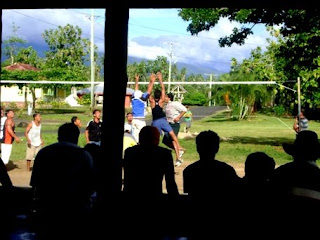 Watching the volleyball tournament. Did I forget to mention it was a tournament? It was. Teams from neighboring villages came to play. I guess sometimes it's not very sandlot-ish. 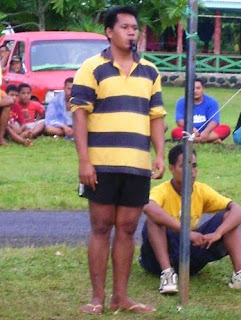 The volleyball ref, Tony's bf, dressed up as a Cal athletic supporter. 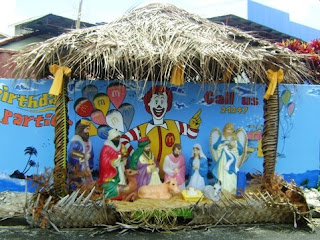 This is the Nativity scene at the only McDonalds in the country. I think the gifts of the Magi were gold, frankenscense, myrrh, and special sauce. 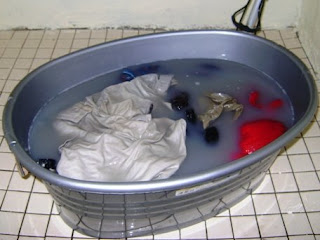 Manual laundry in my shower. 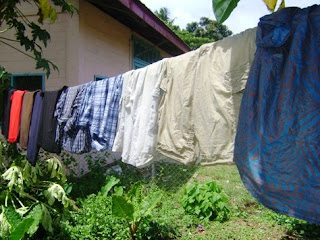 Manual laundry on my clothesline. 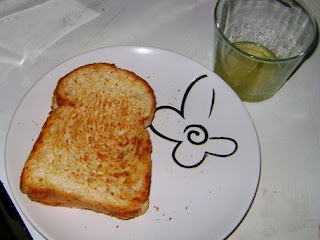 Grilled cheese and Sprim for dinner. 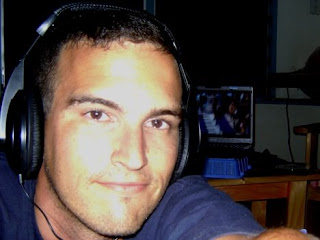 Me watching "Big." You can see the piano scene in the background. 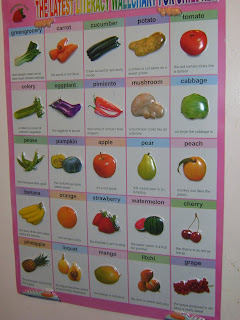 Shout out to 2416! Check out my poster! I uploaded this image larger so you can click on it and read the sentences. My favorites are the peach and the peas (sp?).
Posted by Matthew at 9:06 AM

Labels: Holiday, Moving On In, The Village

I love the Santa suit but you look especially nice in the tie! I'm glad you received "Big." It reminds me of the weekend of the LA marathon!

Loved the nativity set with Ronald McD...interesting cross-cultural image...missed you at Christmas...your sister and cousins decided you were the favorite child...and you'd have been distressed at the words that Michael got away with playing Scattagories since you weren't there.

Few Polynesians recognize the ancestral history as is evident by the comments.

You must steal this new "literacy wallchart for children". 2416 is the only proper place for such things.