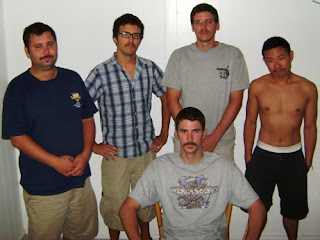 The end of the year is upon us, and since not too much interesting happened since I posted yesterday’s blog, I figured I’d go back and post some of the pictures that somehow slipped through the cracks over the last couple months. I’ve tried to post them in chronological order with the exception of the Moustache Gang above, which was too priceless to not post, and I’m not sure what happened. In any case, this is as long as my moustache got. A few hours later that same day, it was gone. It should be noted that AJ briefly participated in the ‘Stache-Off, but he dropped out early due to a previous commitment. 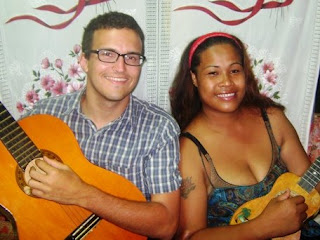 Maybe I posted this one before? This is me and Asolima posing with the guitar and ukelele... Getting ready to take the show on the road. 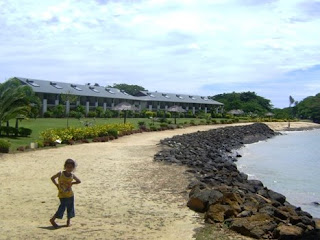 Akanese at the brand new resort on the north side of the island that was built in 2005. It was kind of weird being there with Asolima and ragamuffinly-dressed Akanese. Definitely an upstairs/downstairs feel. 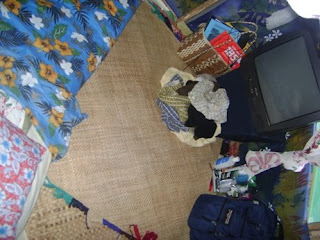 My room in the village. Small, but cozy. 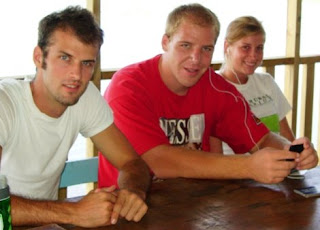 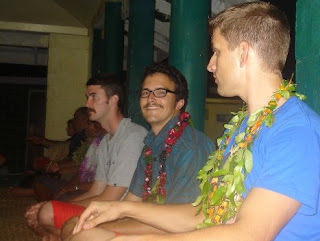 Phil, Me, and Joey at the fiafia on our last night in the village. 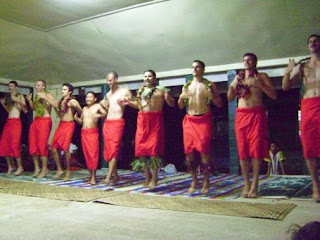 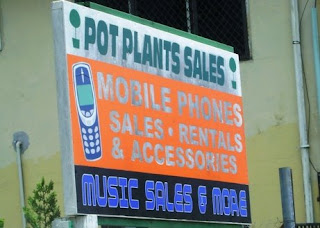 What is this? San Francisco? 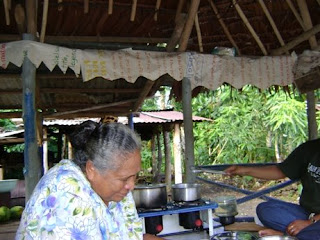 I was the last to go on the last day of model school, so I ended up grabbing the paper that everyone used to throw away later. And then I forgot about it and I left it in my room when I left the village. My family found it, cut it up, and used it as trim for one of their fales. You can see it above Mele's head in this picture. 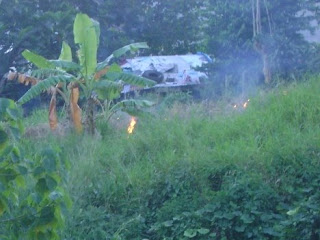 This fire was burning behind my house when I got home last night. I think it is the people who live behind me burning their trash. A little unnerving. 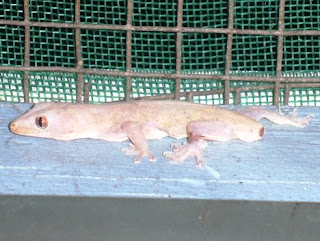 A little strange when you start recognizing the small pests that live around your house. This lizard is missing his tail. I see him (her?) often. 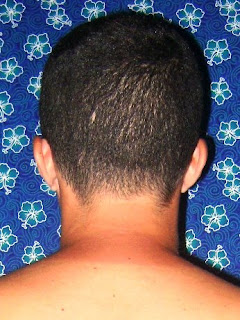 This is the tanline on the back of my neck. Hard to see here, I guess... But it is drastic.
And that's my retrospective. And it ended with me looking back, away from the camera. How appropriate. I probably won't get to blog before midnight tomorrow. So have a happy, safe New Year's Eve, and I'll talk to you soon.
Posted by Matthew at 8:57 AM

We missed you at the Peace Prayer this morning at noon GMT. It was at the Sikh temple in Hayward. A little different - but still a nice way to end the year. I hope you have a safe and happy new year's celebration. I look forward to reading about it.

Matt,
Thank you for your most interesting blogs. I read them everyday & like getting a better sense of PC life in Samoa. I've also enjoyed, and shared the photos with my family.

You are a good writer.