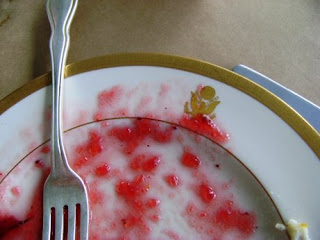 I realize it's a bit late to talk about Thanksgiving, but I'm going to a little bit for a couple reasons. First, I didn't prepare a blog entry for this current village tour yet, and I have a lot to say, so I figure I'll just wait on that. Second, I never got to write about Thanksgiving because things got very busy here once we rolled out to the Thanksgiving party.

The house is a little like you'd imagine a southern plantation to be circa 1854; not that there are slaves. Just very well paid servants. Or I guess we're assuming that they're well paid. In any case, the land is beautiful and sprawling, and the house has all kinds of oak floorboards and other things that make it feel very American. The whole experience is a little surreal.

But certainly the coolest part was the American seal on the plates as shown above.

From an event planning standpoint, the strangest part of the evening was the end. Just before 7 p.m., the Charges d'Affaires came out to the pool and told us that we had to be off the compound by 7 p.m. And then we discovered that our van had left. And then it began to rain. So we stood outside the recently whitewashed wall of the compound in the rain waiting for a taxi. Kinda sucked. And that was Thanksgiving.

So let's play get to know a Peace Corps Group. Group 81, the fightin' eighty-first!

Chris - Chris is from Philidelphia and likes it that way. She has a soft spot for wine and cheese. She'll be working in special ed in Apia.

AJ - AJ is from New Jersey. He's run a marathon and is into rock-climbing. He'll be teaching computers on Savai'i.

Kate - Kate is from southern California, but lived in San Francisco for 3 years. She's worked at Amoeba in LA and SF, and her musical tastes are pretty eclectic. She'll be teaching welding at a fine arts school near Apia.

Erin - Erin is from Texas. She used to work at a camping store. She's slowly been emerging from her shell. She'll also be teaching special ed on the south side of the island.

Phil - Phil is from Arizona. He swam for University of North Carolina. He'll be teaching computers on Savai'i.

Supy - Supy is from New York. He has been to 48 countries. At certain times in his life, he's had a mullet. He'll be teaching computers on Savai'i.

Jordan - Jordan is from Atlanta. He likes Coke. He'll be teaching computers near Apia.

Joey - Joey is sometimes referred to as "Coach." He has an MPH and is an incessant exerciser. He will be teaching at the National University of Samoa.

Koa - Koa's real name is Igor, and he went by Gore for the first couple days of being here, but of all of us, his Samoan name has stuck the most. He'll be teaching computers at the school next to the fine arts school.

Blakey - Blakey is a constant ball of sunshine, which is nice, but sometimes it also nice to sit in the shade. Zing! She is from Minnesota, although she went to Canada for college, and her parents now live in SoCal. She'll be teaching computers near Apia.

Paul - Paul is also from Minnesota. His sense of humor is dryer than mine, I think, which is amazing. He will be teaching auto mechanics on Savai'i. He'll be at the same school as Dan.

Matt - Hi. I'm Matt. I'm from California. I will be teaching computers here in downtown Apia.

And that's all for now. Pictures of everyone below. 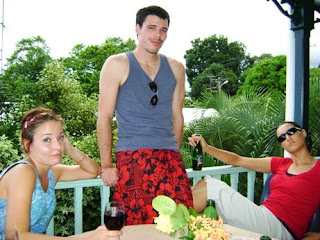 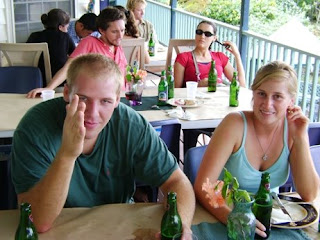 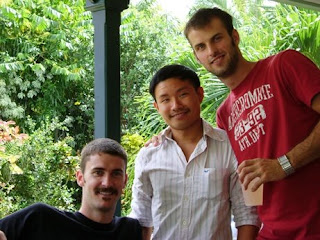 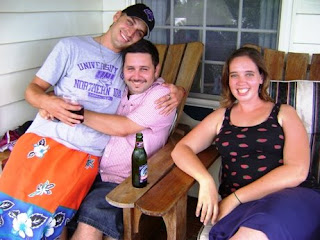 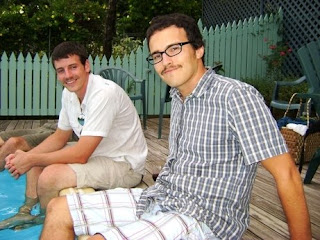 It was great to see your new post! And it was especially fun to read about all the people you're hangin' out with. But now we need Matthew news! I hope you post again soon. We miss you!

Yay! New post. I like the guy who has had mullets throughout his life. You so funnnay! I'm putting together your package right now. Sorry I'm the worst sister ever. I can't wait to here from you again sooooooooooon!

I'm embarassed that I used the wrong here/hear. I also just did that on the note I wrote you.

I was really happy to come across your new post. Your (bratty, spelling-challenged)sister didn't tell me there was one. Are you back from the village to stay? I miss you!

Wow. I always knew mom loved you more. I like that picture of the plate. It's so clear!