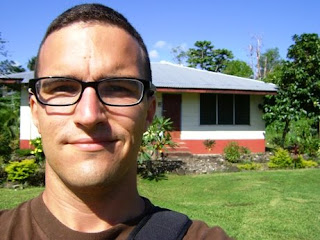 I moved in to my place on the compound of Maluafou College here in downtown Apia. It’s filthy. This is the case for many volunteers. Sites are often uninhabited for long periods of time before the volunteer arrives, which means that they’ve been at the mercy of the elements. Although my principal did tell me that the couple who lived here before me just moved out last week. For their sake, I seriously hope that is not the case.

Yesterday was a rough day. Most of our group woke up at 4:30 a.m. to see the Savai’I kids off. It felt strangely anticlimactic, but I guess the reality of yesterday is only starting to sink in. In any case, I had a hard time going back to sleep.

Koa and Kate, who are both going to Leulumoegafou left together, our Safety and Security coordinator took Erin to her site, and the rest of us were taken together to our sites in and around Apia. The van was packed specially in the order that we’d be dropping people off. My stuff was packed last because I was dropped off first.

Over the next few weeks I will be working on improving my apartment by:
There is a strange L-shaped table connected to the wall in the middle of the main walkway. At first it looks like a bar, and then it looks like a desk. My detective work has led me to believe it was built for a sewing machine, but really, who knows? My principal asked if I wanted to keep it, and while it would make a pretty good desk, it isn’t near any electrical outlet or phone jack.

I mopped today with bleach. The blue mop that I bought immediately turned from blue to pale. Not sure what was up with that. I had purposely not bought anything because I planned on shopping today since I would have a better idea of what I need. I made three shopping trips on foot. My feet were annoyed by this, and it was HOT today. I haven’t bought a fan yet, but I think I might do that tomorrow.

The combination of the filth, the heat, the poor sleep, the ever-present language barrier, and the new solitude made yesterday pretty emotionally taxing. At one point, I was in the hardware store and I really felt like crying. But I didn’t.

It wasn’t all bad though. I did feel like my mopping did significantly improve the floor, though I had been skeptical over whether I could make any difference at all. I also ran into Onofia at the hardware store. He was happy to see me, and was excited to hear that I’ll be in Fausaga for Christmas. I cracked open the hard drive that Jennifer and Tommy gave me as a going away present. It is more awesome than I was expecting it to be… And I was expecting it to be pretty freaking awesome. Finally, my building is a duplex and my neighbor seems nice. Her name is Myengi (spelling completely unknown), she teaches science here, and she is originally from India. She had a bunch of people over to visit yesterday, and she brought over some pizza around dinner time, which meant far more to me than she probably knows.

I’m really excited about going to Savai’i this afternoon if for nothing else than the boat ride. I’ll bring my camera and let you know how it goes.

So long for now. Apartment pics below. I think there’s an ant in my hair. 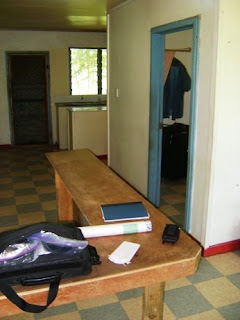 My house as seen from the front door. Front room immediately to the right, bedroom is the door on the right, kitchen is in the back. Bathroom is between bedroom and kitchen. 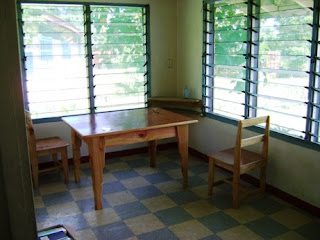 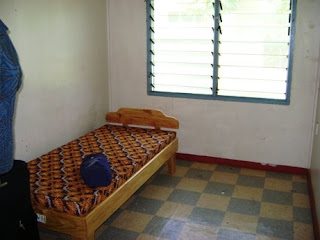 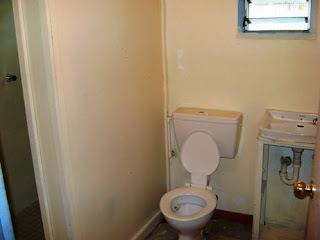 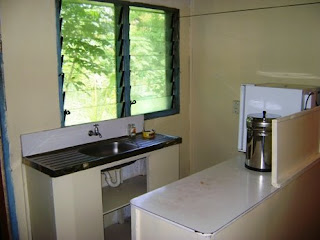 Kitchen. This is before they delivered the gargantuan gas stove that is taking up the majority of the counter space. 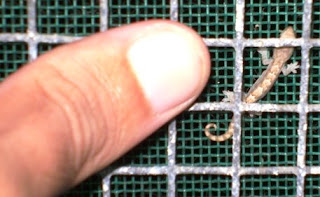 This lizard was crawling on my window screen last night. It was tiny. That's my thumb.
Posted by Matthew at 10:01 AM

Labels: Moving On In

Wow! Your new place looks great. I can't wait to see it. Definitely more space than Pasadena. I'm still sad that you cut off all your curls.
Love and miss you!

I love your place! I think it's super cute & I'm excited for you. Is your host family going to come visit you there?? Maybe they can help you spruce it up!