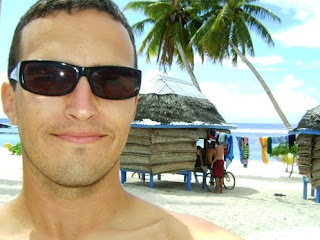 Without the services of the good people at Zamzar.com, I would not have been able to convert this blog from docx to doc, and there is no way it would have been able to go live until tomorrow, which would have sucked. Also, any Samoa PCVs should note that Internet Explorer works much better on the computer in the Savai'i office than does Firefox. And I'm a big fan of Firefox.

When I arrived, sopping wet, the bus was waiting. There was still another hour of darkness, and I realized as soon as I got on the empty bus that it wasn’t empty at all. It was nearly full with many sleeping people. So I sat and fell asleep myself.

The sky was getting lighter as the ferry left the wharf, but it wasn’t until we were in the middle of the channel that the actual sun came out. This actually worked out well because I was on the smaller of the ferries, which has fewer seats, and I had to stand out on the deck with the cars for the entire trip. It was nice to watch the sunrise while I listened to Guster’s “Keep it Together” album. It fit well.

I got to Phil’s around 8:00 a.m. I had time to put down my things and have a little breakfast, and then we were off. We met up with the group, who was watching the Reebok Office Linebacker commercials (Shameless shoutout to Daunish). The taxi showed up 45 minutes late, but it was 13 hours before midnight, so it was cool.

Much of the group went for a swim as soon as we arrived at the beach fales in Falealeupo. I took a nap. I still had time to swim and play cards when I woke up. We also played a pretty good game of barefoot Ultimate Frisbee on sand. The wife of our language trainer Setu lives in the local village, and he was out there with the rest of us huffing and puffing.

The afternoon meandered into evening, and everyone in the group gathered around to catch the beautiful final sunset of 2008 (I only realize now that I watched the sun rise and set on the same day. I don’t think I’ve ever done that before.). Some pictures of this sunset are below.

Dinner and breakfast were included in the cost of staying overnight at the beach fales, but it turned out that the youth group from the local village would also be performing for us. Setu suggested that we do the dance that we learned in Fausaga after the local youth group was done. We were a little rusty, but the locals seemed pleased.

I called home at midnight PST, which was fun.

Midnight at the beach turned out to be a little anticlimactic. Since pretty much all of us tell time using our phones, and since none of our phones has a second hand, a countdown was difficult. Additionally, there’s no dialing popcorn in Samoa, so it’s difficult to coordinate exact times. So sometime around midnight, the group congregated and Blakey started a countdown and that was that. Ben and Trent and some others sang “Auld Lang Syne,” which felt a little strange to me.

No buses or taxis ran on New Years Day, so we knew we had to spend the day in Falealeupo shooting the breeze, passing the time. The guy who runs the beach fales agreed to let us stay until mid-afternoon, so we spent the morning and early afternoon swimming and playing cards and laying around doing not much of anything.

After, the boys caught rides to Spencer’s house and the girls called a friend who drove them to Jenny’s. The village where the girls stayed cooked a large meal for them. Spencer’s village gave us a basketful of breadfruit, which was good. In Samoa, breadfruit is often cooked with pig and taro in a traditional umu fire. Though we didn’t have pork or taro, we still built an umu, which was pretty cool and very masculine. While the breadfruit cooked, we carved roasting skewers with machetes so we could roast our hot dogs. It was also very masculine. We spent the evening playing “Mafia,” which felt a little like a college dorm, but it was still a really good time.

Sleeping accommodations for last night were a little minimalist. Spencer’s place is very small, but the falekomiti, the fale where the women’s committee meets, was large enough for us all to fit comfortably. We slept on rattan mats and lit mosquito coils, which proved effective.

January 2 is considered a holiday in Samoa, but we were able to get a taxi to take us from Falealeupo to the wharf. I’m posting this using the computer at the Peace Corps office on Savai’i, and I’m going to stay over at Phil’s house tonight.

I’m in no rush to get home since no one will be there and I don’t have anything to do there, but I’ll probably leave tomorrow. Lucia’s is a bar and grill here on Savai’i that has a dock in the back that you can jump off of, straight into the ocean. The place has been talked up to me quite a bit, and I am excited to see that tomorrow. Otherwise, not too much going on.

I hope things are well with everyone back home, and I hope you are having a wonderful new year. 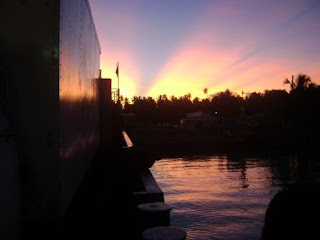 Sunrise on the ferry to Savai'i. 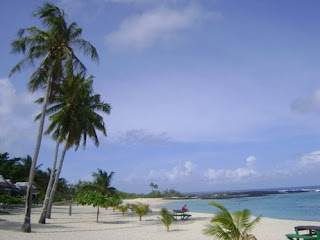 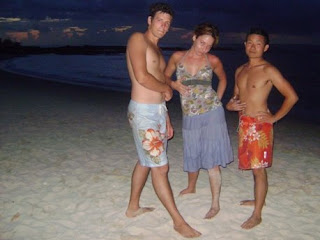 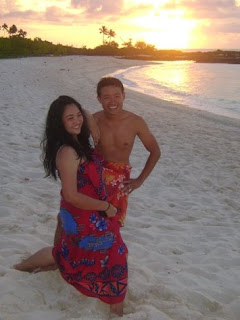 Supy and Rosie in their engagement photo? 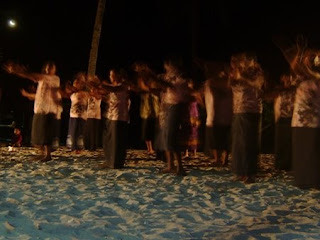 The local village youth group dancing for us. 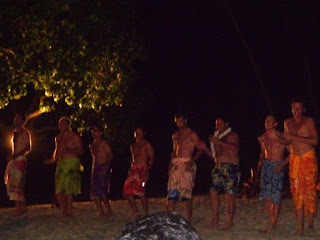 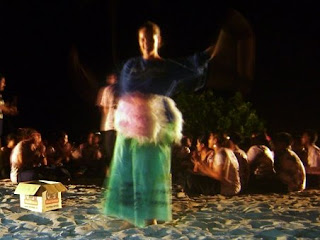 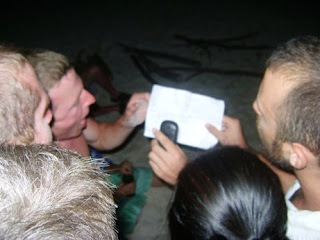 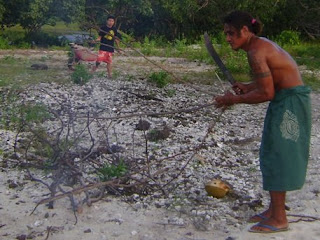 This is Niko. At one poine during the preparation of the umu, Niko stepped on a nail that went through his sandal into his foot. So he removed the nail and put the board that had the nail in it into the fire. He then took a chunk off of that board that was still burning and CAUTERIZED THE WOUND. We watched. 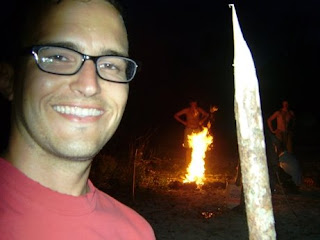 Me with my ultra-male fire stick. And a fire. 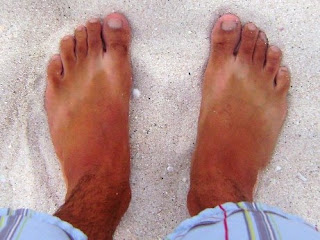 After nearly 3 months in Samoa, my sandal tan is looking awesome.
Posted by Matthew at 4:18 PM