For Weedings and a Fun Excel 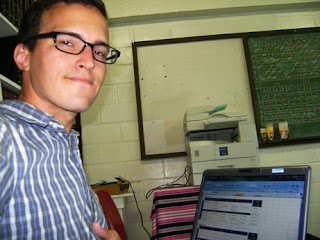 At my apartment in San Francisco, we once hosted a Nintendo GameCube Mario Soccer Tournament. We had 10 players, but the game can only configure a maximum of 8 players. Brian was skeptical, but I convinced everyone to let me try and build an Excel spreadsheet that would dictate who played whom. I designed a sheet that, in addition to tracking tournament standings, also kept stats on wins, losses, goals scored, and goals allowed. As I replaced the generic player codes that I used to design the spreadsheet with our real names, Liam said, “Wow! Any doubt I had about this is completely gone!” It was an exciting moment. And I had another one of those yesterday.

Part out of laziness, part out of a need to drag the school kicking and screaming into the 21st century, part because I had nothing to do yesterday afternoon, I figured out how to get Excel to spit out teacher schedules. I tried Sunday night to get it to do it, but my brain could not wrap itself around certain issues. Excel kept shaking its head at me. “I have no idea what in the hell you’re trying to get me to do,” it kept saying. But then I gave it another stab yesterday afternoon. See, the alternative was to go sheet- by-sheet and input everything manually. And I felt like “The Wire” would be more fun.

Here’s the solution I came up with:

And then it worked! Nerdgasm!

I may be puny. I may not know how to fix a loose video card. I know nothing about BIOS. But I will throw down when it comes to Excel.

Note: I admit that to REAL Excel nerds, the function above is actually pretty simple. Erica at CNET would look at it and roll her eyes. But it still felt cool. Shut up, Erica. You never taught me vectors.

One problem with my solution above is that it doesn’t tell you when a teacher is scheduled for 2 classes at the same time. I need to work on a system for that.

The first week of school in Samoa tends to be a lot of housekeeping; cleaning out classrooms, pulling weeds, making sure desks and chairs are correctly distributed, etc. Part of the reason there were no classes scheduled is because the schedule of classes was not (and is not) finalized. We completed the schedule during yesterday’s weeding, but it still needs tweaking here and there.

But when I’m not in a meeting with a clear task at hand, walking around is a little chaotic. I haven’t been very clear on where I’m supposed to be or what I’m supposed to be doing. So I follow the missionaries around, in part because I’ve known them longer (they’ve been here since I moved in) and in part because they speak English and they sympathize with my ignorance of Samoan. They’re like big sisters.

To this point, my actual student interaction has been minimal. I smile at them. Or I nod. I’ve taken pictures. But I’ve had little business that requires student interaction. It doesn’t worry me too much. I figure my relationship with the student body has lots of time to grow.

In fact that’s how I feel about the whole thing. I kinda like that school has only kinda started. It feels like we’re easing into the school year. I’ve had to get up at the real time every morning, and it’s good to know what that feels like before I have to get in front of a class. During training, I tested very high in polychronism, and I figure my being okay with this week is another facet of that.

I hope things are well at home. Pictures below. 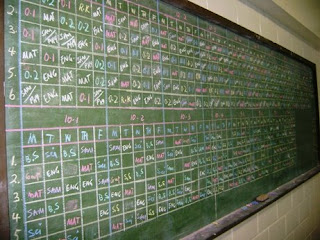 This is the crazy chalkboard with the entire schedule laid out.
18 classes x 6 periods x 5 days of the week = 540 tiny boxes 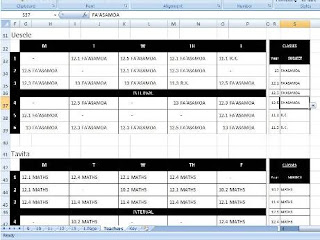 This is my crazy Excel file. See, you enter the classes you're teaching on the right, and your schedule gets populated on the left. 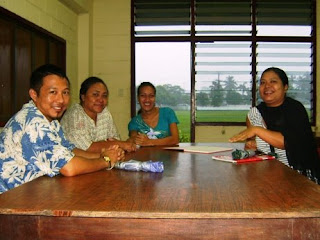 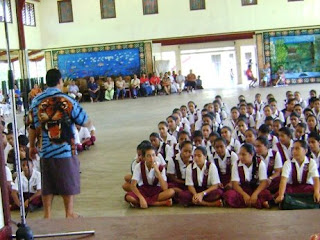 Assembly on the first day. 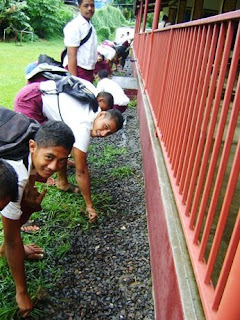 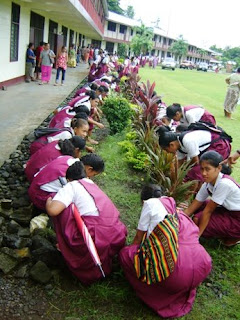 OMG the picture of the schedule on the blackboard was hysterical. Okay maybe not hysterical but having had to put schedules together in my other life I got a good laugh. Try post it notes the next time. They are easier to move around when you have conflicts. Can't believe the kids were actually weeding. If NCLB were dead, it would be turning in its grave! Can't wait to hear about your students.....:)Deb

after looking at the pictures, my first thought was "wow, they are weeding in their uniforms!" now that's hardcore.