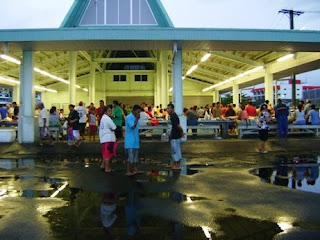 The fish market is open all week from early in the morning until mid- afternoon, but the big day to go is Sunday morning. In addition to the fish for sale, there is also a farmer’s market sort of deal, which is somewhat akin to The Market, except for it’s more of a special occasion, and the quality of the produce seems to be better. Earlier in the week, I ran into John the Welder, a PCV so named because of what he teaches at one of the postsecondary schools in Apia, and asked if I could go along with him to the fish market. He told me to meet him there at 6:00 a.m. Sunday.

The first thing I noticed when I showed up was that it was 6:00 a.m., and looking at all the fish and all the people there, I wondered to myself, “Why in the hell am I awake?” I got over that quickly though, walking around and seeing all the fish.

The fish market like a really morbid trip to the aquarium; even though everything is dead, it’s still pretty cool to look at. Especially the big fish. It’s fun to imagine what they looked like swimming in the depths of the sea before they were caught, killed, and sliced into cross-sections.

Most anglers catch fish during the night. I’m not sure if this is because better fish are available, or the thought of sitting in a boat for hours in the tropical sun sounds hellish. As a result, the fish are quite fresh. Some are brought in coolers, but many are just brought in buckets.

The market is organized a bit haphazardly, but there did seem to be separate areas for deep sea fish and reef fish. I ate a lot of reef fish during training in the village, and they’re annoying to eat because they have so many bones. They have bones in strange places too; perpendicular to the ones that grow up and down along the spine. Reef fish are also a lot smaller and so they have less meat.

So John, Hannah (Another volunteer. She’s a vet.), and I all ended up buying a cross-section of tuna. I think Hannah may have also got some swordfish to make oka, one of the local dishes.

We didn’t stay at the market too long. Hannah said it was smaller than usual. We also had a bunch of fish between the three of us, and that’s not the sort of thing you just hang around with.

Hannah lives not too far away, and the three of us headed over to her place to further chop up our fishes (I believe “fishes” is correct in this context because we had 2 types of fish: tuna and swordfish. I don’t know for sure though. I left my Chicago Style Guide in The States.). Cutting a slab of tuna into tuna steaks seems intuitive enough, but I figure watching John do it wouldn’t be a bad idea.

One last thing about the fish market is that they have a little snack bar there that serves fish and chips at lunch time. They also have cups of Hawaiian poke and Samoan Oka, each of which are delicious. It’s not the cheapest lunch you can get in Apia, but it’s not too pricey either. And it is one of my favorite lunches in Apia (I’d rank it top 5. Perhaps after I’ve been here longer and tried more places, I ‘ll post a little restaurant guide.).

In other news, our teacher inservice runs tomorrow through Wednesday. Phil and Koa are staying at my place because their schools will be joining my school in inserving. It should be raucous.

Hope things are well back home. Pictures of fish below! 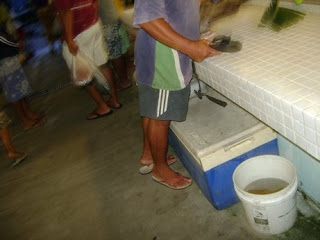 The cooler and bucket in which fish arrive. This picture has action! 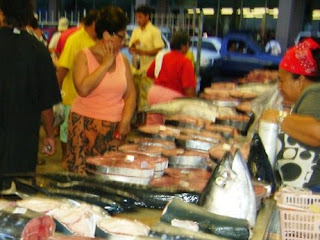 Big fish are broken down and sold for their parts. 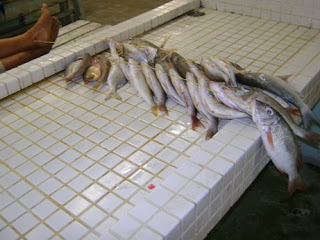 Little fish are sold whole or in bunches. 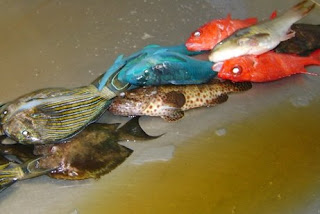 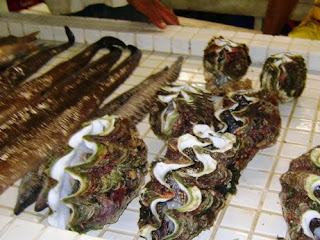 Eels to the left, clams to the right. This is where all the commerce goes on. I believe the fish in the foreground are sailfish. 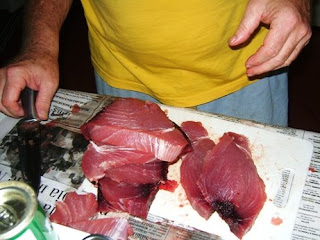 John cutting up the fish back at Hannah's house.
Posted by Matthew at 12:10 PM

I am loving your cultural exploration blogs. 'Pretty clever on the "One Fish, Two Fish" caption. I can't help but look at that and chuckle.

Wow! Lots of fish. The part about all the bones reminded me of why I don't eat much fish. The tuna, however, looks tempting.

Mmmm... it must smell yummy.

mmmm... missed the smell of the fresh fish back home.. well, except for the prices I dont think they'll ever chop that down to pieces LOL..