Only Inches on the Reel-to-Reel 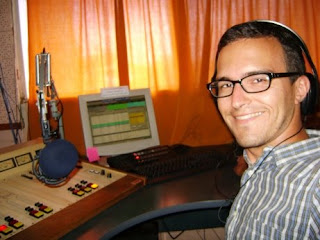 I finished The Last Temptation of Christ on the bus to Fausaga on Friday afternoon. And last night, after what has become my normal routine of eating dinner over the sink and then settling in for one episode of “Arrested Development” and one episode of “The Wire,” I picked up the copy of Into the Wild that my dad sent me for Christmas. I couldn’t really put it down. I finished it this afternoon. Very rare that I finish a book in less than 24 hours. And while I have much to say about it, I think it needs a while to ruminate. So I’ll get back to you on that.

In the mean time, I should tell you about last night’s radio show. To put it lightly, it was a disaster. Erik asked if I’d be interested in filling in for him on Wednesday night, and I was elated. Elated and cocky. I came back early from Fausaga yesterday morning so I could meet with the station manager, and at 4:00 p.m. yesterday, I showed up at the station ready to go.

Things started off on the wrong foot when the security guard wouldn’t let me in. This was the third time I had come to the station, and on previous visits, the same guy had actually shown me how to get around the locked door. So it was strange that he was singing a different tune last night. He was quite adamant about not letting me in without a note from the station manager. When I asked if I should go and look for the station manager in the back, the guard told me, “No. He’s not here. You’ll have to go and find him somewhere.” I imagined myself roaming the Samoan countryside going door to door asking for information on the whereabouts of Corey, the station manager of Live 97.3.

I figured at the very least I would make myself a thorn in this guy’s side until I got bored. I figured the repetitious interrogation tactic was interesting enough.

Wait. That worked? I just had to ask you enough times? The sphinx never would have given up so easily.

I called Corey, and Corey told the guy to let me in. Done and done.

But oh, how I am baffled by soundboards. For the first hour, I couldn’t find the headphone jack. I had to listen on the monitor, and when I turned on the microphone and the monitor cut out to avoid feedback, I had to just assume things sounded okay.

The other big problem was the computer program that controls the playlist. Every time you make a change to the playlist, you have to double click on the playlist for it to accept the changes. Erik, who is an old pro, still forgets to do this occasionally, and it definitely screwed me up last night.

But there’s more! The worst flub of all was the weather report. The weather report, which happens nightly at 6:10 has an intro clip, a long extended clip that plays while the DJ read the weather, and then an ad from the sponsor of the radio clip. I got the intro to play. My reading of the weather was mediocre (“We just heard Creedance Clearwater Revival ask ‘Who’ll Stop the Rain?,’ and that’s a good question because it looks like Monday and Tuesday will be pretty stormy.” Yes. I really said that.). But when I was done, I had to skip from the extended music to the SamoaLife ad, and I did not do that. I realized in that instant that I had never skipped a song in the middle of the track, and I had no idea how to tell the computer to do that.

Somehow I manage to find a Corinne Bailey Rae track to play, and I eventually get the damn weather music to stop. And once things have cooled down, trying to console myself, I uttered, “Oh, who’s listening?” AND THE MIC WAS STILL ON! Idiot.

And that was my radio debut. The show’s playlist is posted below.

In other news, the family that I have been sitting next to at Sunday mass, it turns out, owns Lesa’s Samoa Telephone Ltd., which is the company that installed the computers at my school. So it was exciting to meet them serendipitously.

It rained on my walk home from church, which was annoying because I brought my umbrella last week and the week before when it didn’t rain. If only I’d heard a quality weather report for today…

Hope things are well back home. More pics from the village below. 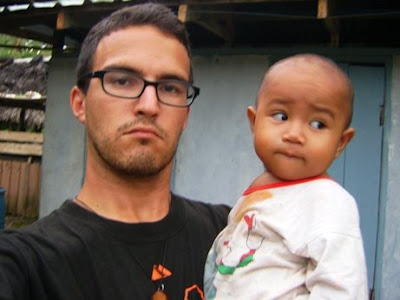 Me holding the baby. 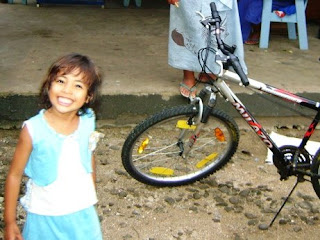 Akanese. A little washed out. 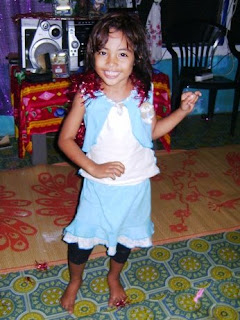 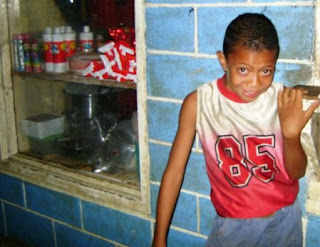 This kid was outside the local faleoloa. He was excited about his picture being taken. 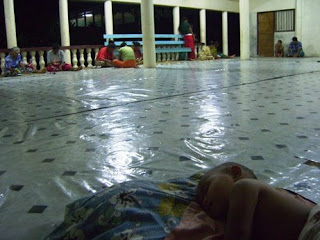 Sleeping baby in the foreground. Bingo players in the background. Okay. 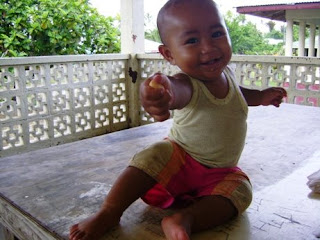 Here is my line-up for last night's radio show:

aww, I know I shouldn't laugh at you for having a tough time at the radio show, but this was hilarious! And great playlist :)

a very entertaining blog! this one should be written into one of those sitcom episodes you mentioned a while back. and i LOVE that you played Bon Jovi's "Livin on a Prayer".

oh I forgot to say, I've read Krakauer's Under the Banner of Heaven, a book about Mormonism and its polygamy history, mixed with a (then) present-day mystery. It was good. I was thinking about reading Into the Wild. I want to know what you think so I can decide if I should buy or borrow.

Jason Mraz, I'm Yours
U2, The Sweetest Thing
Corinne Bailey Rae, Put Your Records On

Margarita, Both are excellent books, as is Krakauer’s writing style. ‘Heaven’ is a good history lesson mixed with a based-on-a true-story detective novel. ‘Wild’ is about a guy trying to find ‘self’ – as I have no other words for it. (Actually two guys, because Krackauer examines his search for self, as well.) Matthew is right; ‘Wild’ is hard to put down and the ending is pensive. It makes for a good group discussion. I cannot imagine the movie ‘Wild’ could capture the search for ‘self’ as the book did, so aside maybe from the visuals of Alaska landscape and wildlife I wouldn’t expect much depth.

Bon Jovi's Livin' on a Prayer? Because they don't play that 500 times every night at Paddles/I Spy and On the Rocks? ;)

I'm enjoying your blog! Reminds me of all the things I love/don't love/miss/don't miss about Samoa.

(I think that you and I are distantly related through our families, by the way. I lived in Tafitoala for two years, my mother is Akenese, my father is Pauli/Patolo, and my brother is Apele'amo. He teaches at the primary school in Mulivai. (My Samoan name was Peta.) I think your family are cousins of my mother? You know how complicated Samoan families are. Who really knows. But I'm pretty confident I met your little Akenese a few times. I think she's my 3rd cousin or something like that?)

Love the weather report. Samoans are joksters, you could just followed up with, "fa'aoso atu outou." That's another word to research. Love the blogging.