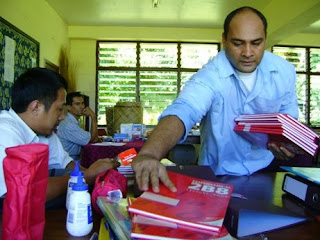 It’s a little unexpected that the school where I’m teaching in Samoa (albeit private) has a much higher budget than the school where I taught in West Oakland (albeit public). I realize that comparing private and public education is somewhat pointless, but I’m nonetheless struck by the contrast. I guess the flat screens should have tipped me off, but the discrepancy didn’t really sink in until yesterday when they started handing out supplies to the teachers.

I’ve been budgeting January carefully, but last week I realized that I was probably going to need to spend a bunch on teaching supplies. I definitely needed some sort of calendar or planner, and a couple notebooks would also be necessary. Good thing I didn’t buy anything. At our staff meeting yesterday afternoon, each teacher received a:
I don’t recall ever receiving any supplies from my school in Oakland. There was a lot of secondhand stuff you could forage for in many of the seemingly abandoned classrooms around the school, but we were certainly never given new things.

And again, I understand that I’m skewing things by comparing a Samoan private school to an American public school, but if you were in my shoes, it would beg the comparison, don’t you think? Also, I was thinking about this: If you compared the wealth of my students in Oakland to my students here in Samoa, and you accounted for exchange rates, etc., who would have more? I honestly don’t know.

It’s not like the students at my school are incredibly rich compared to other Samoan students. In fact, many students who attend school here bus in from rural villages for the week and return home on the weekend. Many of them pay their tuition via in-kind donations of brooms and mats. Also (I’m not completely sure of this, but I can ask some other Peace Corps…), I believe that public schools in Samoa also charge a small tuition. I’ve heard it’s minimal, perhaps $50 WST for the semester, but it’s not like the fact that my kids attend a private school means they’re well-off. So it’s impressive that the school provides teachers with supplies.

In other news, now that I have internet at my house, I no longer have to schedule my day around making it to the internet café at a reasonable time. This has left my afternoons wide open, and I’ve taken advantage of it so far. Yesterday I had time in the afternoon to read 47 pages, ride my bike to the ocean and to the Samoa Aquatic Centre, and write yesterday’s blog. Today I met with my host family, read a lot more, and went to visit Erik at his music school where I touched a piano-like instrument for the first time in 3.5 months. My skills were rusty to say the least.

I also exercised yesterday. I ran a 3-mile loop along the sea wall. It was a slight shock to the system. Some of my group would wake up early in the training village to go running. Joey, who is here to lecture on physical education and kinesiology at the National University here, is in tremendously good shape. I’ve been waiting for the dust to settle. It wasn’t so bad; the weirdest part was wearing shoes. It’s the first time I’ve worn shoes since our first week here. My feet felt huge. Also, running 3 miles along the sea wall in Apia was a much sweatier time than doing the run around Lake Merced. I did sit-ups in my kitchen when I got home, and there was a pool of sitting water (errr… sweat) on the floor when I finished. It was gross.

And with that pleasant image, I’m going to sign off. Have a great Friday. Pictures below. 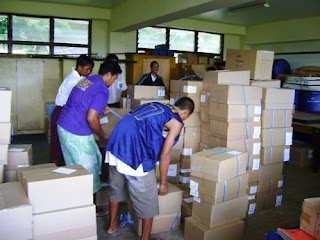 This is the room where all the supplies came in. Students also get supplies from the school. Notebooks, pens, etc. I didn't get an itemized list of what they received. 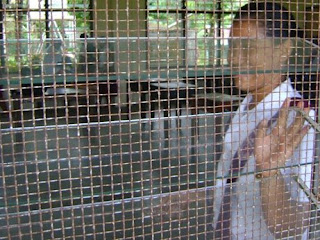 This girl was washing windows when I walked by, but by the time my camera was ready to take a picture of her working, she got all giggly and completely stopped working. 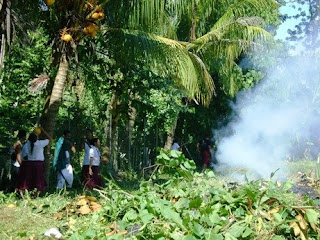 While most of the school was out weeding and trekking grass clippings back and forth, the year 13 kids were back behind the school maintaining the fire that was used as a makeshift incinerator. Also, they were bumming free niu off the palm trees in the back (you can see a girl drinking one at the left of the picture.

Could be your school has some major sugar daddies. When my kids were in St. Monicas back here in Indy, Target stores sponsored some local schools, and we got a whole bunch of free stuff that they donated for that year. It was like manna from heaven, but we certainly didn't get it all the time.

wow i am so excited (and impressed) for your new teacher supplies. i remember buying my kid crayons, pencils, a sharpener and a pencil box before he started kindergarten. granted, they are for home and homework use, but he supposedly goes to one of the best public school districts in the state. another one of my friends teaches at a charter school in chicago. she was just complaining to me about how much money she has spent on her teacher supplies. go samoa!

I wonder how much money schools here could find in the budget if they had the students doing the cleaning and maintenance... but yay school supplies!

The Congregational Schools in Samoa are given large funding by the National Congregational Church organisation based at Malua (EFKS). Its the largest church in Samoa. They have a lot of money to splash around and a bit of it goes to school funding.