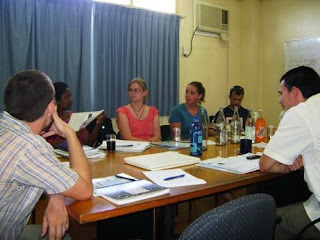 The social structure at my high school back home was not traditional, and I always attributed this to the size of our student body. With over 4,000 students, no single group dominated in popularity. Football players and cheerleaders were not the ruling class the way they always seem to be in pop culture. Sure there were the girls in leadership and world guard who were well-known, but their status didn’t really amount to “popular” in the traditional sense. Being a guy who would have fit best into the “geek” contingent of that traditional model, I was always happy to be a little fish in a really big pond. Growing up in that environment, I’m always a little thrown off being thrown into a little tiny pool.

Relative to other posts, Peace Corps Samoa is quite small. According to a Peace Corps staff member, there are about 280 Peace Corps in the Ukraine and roughly 220 Peace Corps in Morocco. Samoa has somewhere in the neighborhood of 40. In addition, Samoa’s land mass is quite small. In many parts of the world, the volunteer living closest to you might be 20 or 30 miles away, but here, 20 or 30 miles gets you half way across the island. And since there’s not that much land or water that separates any of us, we rub elbows quite often.

Mostly this is a good thing. Life is less lonely when there’s another American a bike ride away. There’s someone close by to chat or commiserate or gossip. But the other side of that coin is that sometimes these little islands can feel a bit crowded. It’s weird how a volunteer can grow so accustomed to the solitude of a habitat that the relative close proximity of another Peace Corps can have a style-cramping effect.

It reminds me of eCivis. In the old building, we shared the restroom with all the other companies in the building. If something was messy or there was someone in the stall, an air of anonymity was maintained. But when we moved into the new building, we had our own bathroom. And since we were a tiny company, the bathroom situation became a bit awkward. The mess was a little less anonymous. I would regret recognizing the shoes of the person using the stall.

So where am I going with all this?

We had our first Volunteer Action Committee meeting today, which is the rough equivalent of student government. Each group sends one representative from each island, and they gather 3 times a year to discuss issues pertinent to PCVs in Samoa. And while the meeting was intimate and cordial for the most part, the air felt slightly contentious at times.

Maybe it was just me. I’m a bit cranky after waking up on time for work every day this week (I know. Rough life.). School’s been finishing between 12:00 and 1:00 p.m. every day, so going until 4:30 this afternoon took some stamina. “We’re just blowing through nap time today, aren’t we?” It’s also a little weird to go from spending most of your day alone or with very few people who speak English to spending the entire day with 11 of vociferous native English speakers.

All in all, it was nice to see people, and I do feel like we took steps to improve Peace Corps Samoa. I got to write on the board at the front of the room, which I always enjoy. If nothing else, I have my penmanship to contribute.

I also vehemently advocated incentivizing certain surveys that have had poor completion rates in the past. I think the creative implementation of this idea (i.e. Finding non-monetary ways to reward people) could be effective. It was Joey’s idea, and I’m a fan.

That was my day.

Only 2 pictures below. Have a great weekend. 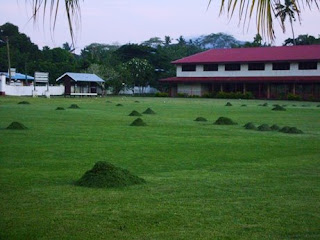 For some reason, these grass clumps reminded me of "The Wump World" by Bill Peet. Bill Peet always reminds me of one moment in fourth grade when Ms. Schoon played a guessing game and Amy won. 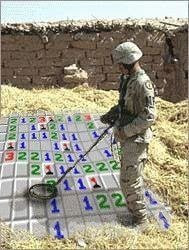 This picture was on the computer at the Peace Corps office. I love it.
Posted by Matthew at 7:07 PM

Wow! I don't think that version of minesweeper looks like much fun.

vociferous, vehement, or obstreperous even!!!