Cultural Exploration 2: Walking Down the Street 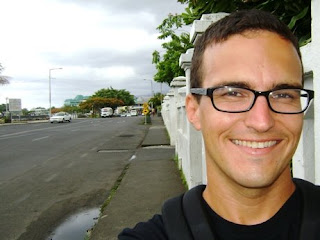 On the first day I moved into my duplex, I ended up walking back and forth from my place to town three times. It’s not too long of a walk; maybe a mile. But with the sun beating down and the humidity and carrying large loads of groceries and settling in supplies, that mile feels much longer. Doing the walk over and over has taught me a lot about the cultural nuances of walking down the street.

Walking from my school’s compound down to the main road, the first thing that’s a little startling is there are no sidewalks. Even in downtown Apia, many places don’t have sidewalks, and the sidewalks that do exist are have no standard height or width. So watch that first step. It’s a doozy.

With no sidewalk, you have to be defensive of your territory as a pedestrian. You don’t want to walk too far in the shoulder because of the mud and the dogs.

Other than Cale’s Mother May I dog, I haven’t really talked about dogs yet. Dogs here are aggressive and angry. Even the nice pet dogs that are well fed and have loving owners can have strong appetites for both bikers and pedestrians. And run-ins with dogs are scary! Usually you don’t notice the dog until it is running at you, full sprint. There’s very little time for reaction, so there are 2 somewhat common defenses among Peace Corps. One is to bike with some form of large stick. Some use broken broom handles, others use broken TV antennae. The other method of defense, the one I use, is picking up a few rocks before I enter a place where I know there are dogs. “Dog rocks” are easy enough to find, carry for a block or two, and then to drop. In actual dogs incidents, it’s rare that the dog actually gets hit with the rock. The action of throwing is enough to intimidate, and the actual projectile tells dog that stakes will be high.

I should point out that I like dogs a lot. Our family had a number of dogs growing up, and I came to love each of them. I don't condone throwing rocks at dogs, except in the case that the dog is going to eat you. Or eat a part of you.

Once in town, dogs aren’t really a problem, but street vendors are. PCV Casey just arrived back from The States, and apparently lavalavas were a big hit with his family. The street vendors have figured out that tourists really enjoy the lavalavas, and they are a little pushy with trying to get us non-tourists to buy them. They also sell pre-paid cards for the local cell phone companies. One volunteer dressed up as a street vendor last Halloween and attempted to sell lavalavas at our Halloween party. It was funny.

It’s also not uncommon for the sidewalk to be obstructed in order to increase business for whomever is trying to sell something. This is a little bit true for the small independent sellers on Beach Road who have started to use public places to sell what are essentially flea market goods. But this tactic is (ab)used even more obnoxiously by actual businesses. There is one particularly heinous sidewalk to walk over near the hotel where we stayed for training. This place hangs their entire stock of shorts over the sidewalk, so you have the choice of walking through auto traffic, or having your face smack into crotch after crotch of hanging shorts. Phil was the first I heard really complain about this, which makes sense given that he is 8 inches taller than I am, and the hanging shorts have got to suck.

Interacting with others is also important when wandering the streets of downtown Apia. Any time you walk between 2 people who are talking to each other (which happens more often than you’d think), it’s polite to say, “Tulou.” This is also said when walking in front of an older person who is sitting along the street.

I was once using the internet in the back parking lot of one of the shopping centers in town. I was sitting on the curb with my laptop, kind of like a high-tech hobo. A police officer had to step over my legs at one point, and he offered a confused “Tulou.” I appreciated it.

Finally, sidewalks can get very crowded, and it’s not uncommon for the person in front of you to completely stop walking without reason and without warning. So tread carefully. And that caps off Cultural Exploration 2.

Addendum: Sometime in recent history, the curriculum for very young grades started including the English words, “Bye bye.” Often (and I mean incredibly often), I will be walking down the street and hear, “Bye bye! Bye bye!” Over and over. Occasionally, “Bye bye, Palagi! Bye bye!” Palagi being the Samoan term for white person. This experience is quite common for all Peace Corps in Samoa, no matter where the volunteer lives, rural or urban, male or female, teacher or construction engineer. Over and over. Again and again. “Bye bye!” “Bye bye!” “Bye bye!”

A quick update on what I’ve been up to: Thursday night I cooked taro. I have pictures. We’ll get to those eventually. In fact, I might make “Adventures in Cooking Taro” a Cultural Exploration if I really get desperate for material. Yesterday afternoon I went to hang out while Erik did his radio show. It was awesome. I spent a couple hours this afternoon making Haute Couture curtains. It’s a work in progress. You’ll see pictures when I’m done.

Hope things are well back home! Walking Down the Street pictures below! 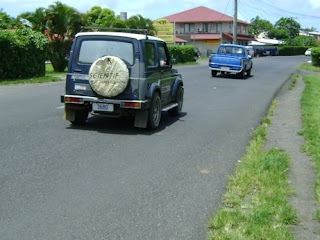 My walk to Beach Road. Hugging the shoulder. 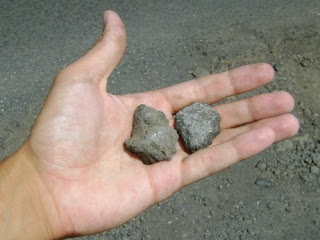 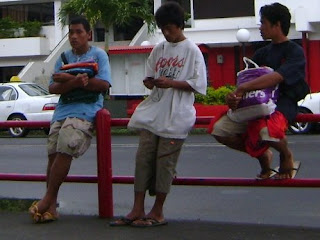 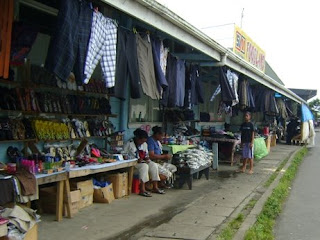 Shorts in your face. 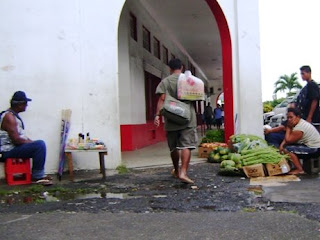 These are also street vendors. They're less obstructive. The produce is sold a la produce at the market. 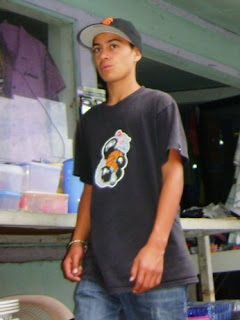 I took a picture of this kid because he's wearing a Giant's cap. 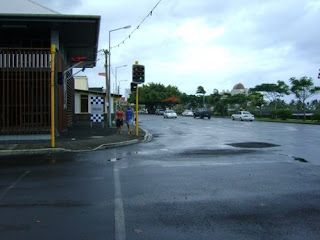 I ran into Dan and Erin this morning. Peace Corps are easy to spot from far away.
Posted by Matthew at 5:13 PM

This all sounds very intimidating to me.

if so, please send me an email