Note: I was not able to post this blog yesterday on account of the internet being down. I plan on publishing another post later this evening. Stay tuned. 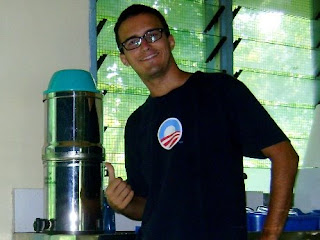 The Peace Corps recommends that volunteers drink at least 3 to 4 liters of non-alcoholic fluids per day. With the heat and humidity in Samoa, I often find myself taking off my shirt as soon as I get home from a walk to the grocery store because my shirt is sopping with sweat. In fact, the Peace Corps also encourages volunteers to oversalt our food in order to replace the salt our bodies lose through sweat. It’s a little intense. And this is me we’re talking about. Those of you who knew me well back home know that I take advantage of the free refill policy of whatever restaurant we’re at. I’m a thirsty guy. So replenishing fluids is an important part of daily life here.

The most popular drink, of course, is water. When we are issued our medical kits after training, we are also issued our water purifiers. Mine is a British Berkshire model. It holds about 5 liters. One thing that’s a little gross is has no way of getting rid of the bacteria that it filters out, so it has to be cleaned on a regular basis. Also, a drop of bleach should be added per liter of water. I mostly drink out of whatever plastic bottle I acquire through buying the occasional bottled water around town. Cale and Sara pointed out recently that water stored in glass bottles tastes better, an assertion which I believe to be true. That said, it’s difficult to find glass bottles that are re-sealable. I supposed I could ask for old spirits bottles at the local bar.

Glass bottle is also the preferred method of serving coke here. I have yet to come across any fountain beverages in Samoa. All soda is out of a can or bottle. Cans tend to be relatively expensive compared to bottles on a per-ounce basis. And it is kinda fun to drink coke from a bottle.

Getting back to water, it gets difficult to drink day in and day out, so I have taken a liking to Sprim, a powdered drink similar to Kool-Aid manufactured in South America. It seems to be full of sugar, and I’m sure empty calories, and certain flavors are definitely better than others. But it’s good. And it makes hides the taste of filtered water (which really isn’t that bad, but still… Sugar’s good.).

It’s rare to see Samoans drinking water. It’s much more common to see Samoans drinking tea or instant coffee. Even when the sun was at its peak on the hottest of days in the host village, my family would offer me tea. Occasionally, the tea would be served lukewarm, and there was even a day or two when I was offered ice tea, but normally the tea is served hot. This would only make my body sweat more.

Most bars have Vailima on tap. Other than that, it is always served in bottles. When purchasing bottles for home use, most volunteers opt for the larger lapo’a bottles, which are also cheaper on a per-ounce basis. The direct translation of lapo’a is “fat,” but 24-ounce bottles of Vailima are almost always referred to as lapo’as.

I should note that in the Samoan language, plural nouns look identical to singular nouns; there’s no “S” at the end of a word to make it plural. The plural is implied when I say, “E to’alua uso,” which means, “I have two brothers,” or “E tele povi,” which means, “There are many cows.” Peace Corps, of course, bastardize Samoan, particularly when talking to each other, and use words like lapo’as, Palagis, Faife’aus, or ies.

Back to drinking. Vailima comes in green bottles and brown bottles, but the only difference in the beer seems to be that one has been bottled in a green bottle and one has been bottled in a brown bottle. This is sometimes a source of contention, and some Peace Corps are adamant that you can taste the difference. I’m pretty sure we have no beer sommeliers in the group, so I’m a little skeptical that anyone is really tasting a difference.

Almost all the wine here is Australian or New Zealander, although I looked at Farmer Joe today, and they do carry a couple of Napa pinots.

Another thing that needs to be discussed is the niu (pronounced almost exactly like "new"). A niu is a special kind of coconut that you can drink from. Okay, you can drink from regular coconuts, but the milk is not as sweet, and regular coconuts tend to be smaller in size. Nius are quite popular here among tourists AND natives. They are highly recommended by the Peace Corps Medical Officer because they are high in nutritional value, and they also act as an electrolyte replacer. So leave the gatorade at home. Bring a niu.

Finally, Farmer Joe sells Shasta, which is pretty random, I think. On the label, it notes that it is indeed produced and canned in Hayward, California. Kinda cool. We’re all so global.

So that’s gonna cap off Cultural Exploration for a while. I have lots to tell you about our teacher conference and Phil and Koa staying over and cooking with taro and updates on the police investigation and sitting in on Erik’s radio show and more, but that will all have to wait for tomorrow.

I hope things are well. Drink pictures below. 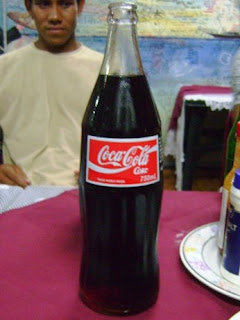 Coke in a bottle. 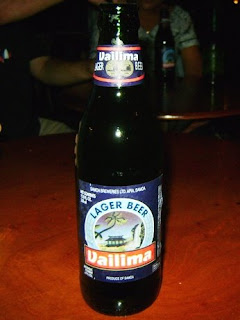 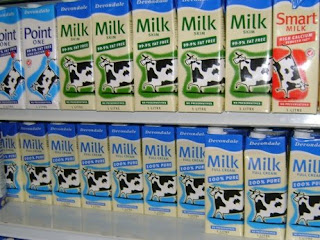 Because milk here is ultra pasteurized, they don't refrigerate it. It tastes fine, but it goes bad pretty fast. Drink up. 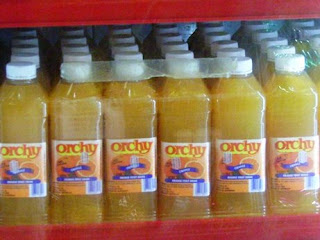 Orchy is an orange drink produced in Australia. I feel like it's somewhat similar to Sunny Delight. Just as bad. 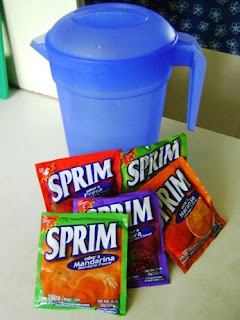 Here is Sprim. The green pack in the back is Apple. The purple one in the center claims to be blueberry, but it has a raspberry looking fruit on the front. I actually find that it tastes much like the Lingenberry juice that they sell at Ikea. I realized this last night, and it was really exciting. 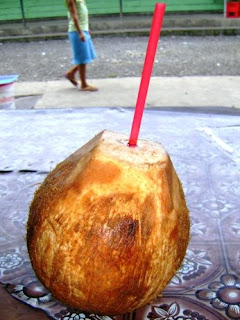 This is a niu. 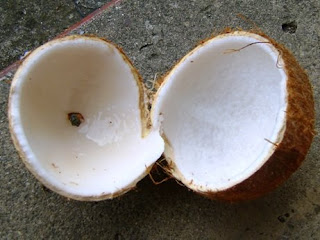 This is a niu split in half.
Posted by Matthew at 9:11 AM

Hey Matt,
Brown bottles are better at filtering UV light, which makes beer skunky when not stored in a cold/dark place.
So given the choice, pick the brown bottled vs. the green bottled beer.
-PJ (Victor's brother)
p.s. Keep up the good work.

Question, I know you are in Samoa, but out of curiousity, do they sell Fiji water there? And if there is, is it as expensive as it is over here? Also, I have spent the last two days reading your entire blog from its inception and I am just fascinated about your experience in Samoa. You should totally publish a memoir when you are done with the tour.--Margarita

Hi!! Your blog are very nice and more info. I hope follow my blog and please click my google ads.

I agree with Margarita. You should really consider publishing a memoir of your experiences in Samoa. You have a certain style of writing that's much more interesting yet informative than the other peace corp journals i've read.

Good luck to you and keep up the great work.

P.S. Sipping niu's- God I miss that about Samoa.