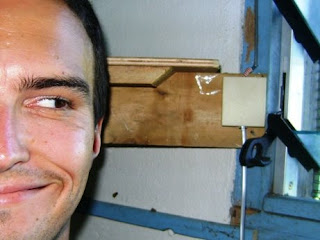 I now have internet in my house. I have uploaded this post to Blogger while I sit on my couch. Yes, it is dial-up. But dial-up isn’t half bad. During the 1990s, we all bulked up our modems faster than internet service providers could keep up. Near the end there, just before DSL became affordable, we all had 57.6kbps modems that were connecting to modems at the AOL hub that were only 14.4kbps. We all remember dial-up loading pages at a snail’s pace, but it’s really not that bad.

Skype works. Sure, there’s more of a delay than there is with a broadband connection, but I’m still talking to The States at a rate that is cheaper by a factor of 6. I downloaded the NPR Shuffle podcast last night (Approximately 20 minutes long, approximately 9MB big); it took about 20 minutes. Not terrible.

In any case, it makes my living situation feel pretty darn complete, with the exception of the cinderblock shelves that have yet to be purchased. I think I might wait on those anyway since I’m pretty close to coming in right on target budgetarily for January. Also, truth be told, I’ve always been a little intimidated buying lumber from the hardware store. It’s so raw; it’s not wrapped in plastic and hung on a rack. How do I deal with that?

This sense of completeness is good with school starting. We finished the schedule yesterday, but the yardwork wasn’t complete, so I go to hang around with a group of boys. I was supposedly “supervising,” but I just watched the machetes swing back and forth. It has that hypnotic allure that is also inherent in things like squeegeeing a windshield or vacuuming a dirty rug; there’s no real reason to watch, but for some reason it’s just so interesting to see the windshield go from splotchy to crystal, the floor from dusty to fresh, the plants from overgrown to hacked-to-death.

They did focus on the area around my house today. They picked up a lot of the trash that was here when I moved in, and one of them climbed my tree to hack the branches that grate against the roof when it’s windy. So that was nice.

My interaction is still minimal. Every student I see on my walk to the teachers’ lounge in the morning says “Morning” to me. Not “Good morning,” just “Morning.” Sometimes I echo it back to them, sometimes I respond with a Samoan “Mālō.” The rest of the day is a series of raising my eyebrows and more mālōs.

I printed out the final schedule today after school. This is the second time I’ve worked in the lab afterschool and another teacher asks if they can come to work and brings his/her children. I’m totally fine with it, and watching the kids use the computer give a bit of a preview for what I’ll be working with once classes start next week.

On Monday I introduced the art teacher’s niece to Microsoft Paint. I went back to working on the schedule, and after about 5 minutes, she called me over to help her. She hadn’t figured out how to click the mouse.

All things considered, this isn’t alarming. She’s a freshman so there’s not too much that is expected of her coming in, and the freshman year curriculum is incredibly basic. I also should emphasize that, while many of my students have never touched a computer before, others are pretty savvy. I’m not trying to tell a horror story or insinuate that all of my students are computer illiterate; I just want to give you a flavor of where we’ll be starting from.

In my interview with the Peace Corps when the recruiter floated the idea of me doing Information Technology, I balked a bit. I don’t have a lot of background in building computers, working with hardware, or troubleshooting operating system errors. But the recruiter explained to me that because the classes are so basic (e.g. “To click the mouse, you press this button”), many people who have a strong IT background aren’t interested or effective in teaching such classes. They’re way too overqualified.

It’s a weird position though. On one hand, we are teaching incredibly basic computer skills, on the other hand, we are expected to maintain derelict computer labs on a shoestring budget. Okay, so my computer lab has flat screens and a few dual core processors. But the great majority of my Peace Corps brethren (Supy, Blakey, Phil, Koa, Jordan, Sara) are trying like mad to pull a rabbit out of a hat. It’s high level IT work (and praying) mixed with teaching at an incredibly basic level (and praying).

We have our first Volunteer Action Committee meeting on Friday, which means tomorrow is my last day of work before school starts on Monday. I need to get chairs up in my lab and I need to figure out how I’m going to teach on Monday without a whiteboard. Or maybe we’ll just jump off that bridge when we get there.

I hope things are well with you, loyal reader. Or site newcomer. Have a great day. Pictures below. 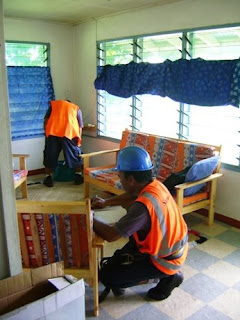 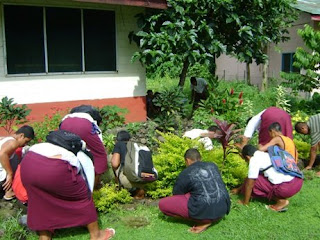 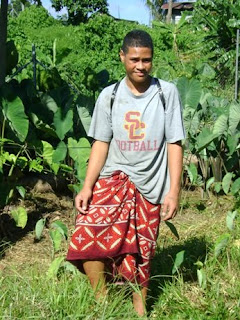 Brown-noser's on his way to an A. 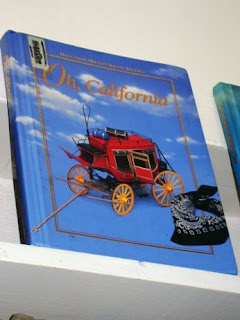 This book is displayed in the school library. Those of you who were also in Ms. Dalton's class will remember that this was our text book in 4th Grade Social Studies. And it's even the same edition! Maps include Yugoslavia. I didn't check whether East Germany is. 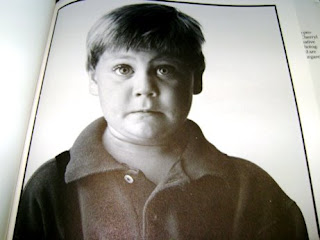 Another book in the library is this one called, "On Monday When it Rained," by Cherryl Kachenmeister and Tom Berthiaume, which is full of pictures of this same kid. Wait. Is that you, young Carter? 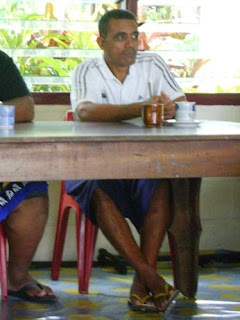 This is the head of the maths (yeah. Maths.) department at my school. Wait. Is that you, Samoan Barack Obama?

haha. i laughed out loud multiple times. i totally remember that book. i feel like that's the same one i had 4 years later with ms. mayhew. i like brown-noser too. cuties.

Sara had the same comments as you last year when it came to the expectation that every PVC knew all about how to fix anything "computer" just because they knew how to operate one. (Can you fix and rebuild a car without any tools or spare parts just because you can drive one?)Sara did not know thing one about how to get all her broken down parts and pieces to work in her computer lab, and if it wasn't for Cale (who is an electronic genius as far as I am concerned) she would have committed hari kari!

Chris said...
This comment has been removed by the author.
12:13 PM

What are the odds of that kid already being recruited by SC?

Matt - does he already drive a land rover or do those "welcome gifts" come after he gets to L.A?