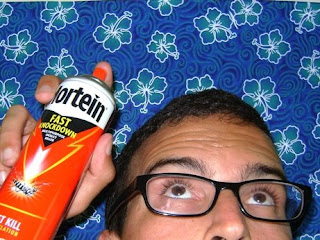 There is a spectrum of living with bugs in Samoa on which people fall somewhere between the poles of co-existence and mass destruction. It’s a fine line and definitely a balancing act. The pursuit of either extreme can drive a person insane. I know Gandhi was living in tropical India when he said that he’d rather leave a room than hurt a fly, and that only makes the man more heroic. Dealing with pests is a multi-million tala industry here in Samoa, and with good reason. Bugs are a really annoying part of daily life.

I remember a particular Saturday Night Live commercial in which a new roach motel promised to rip the cockroaches legs off and then beat the cockroach with it. I’m sometimes reminded of that when dealing with bugs here.

Growing up on top of the giant ant hill that is Union City, California was good practice for Samoa, but the ants in my duplex bring a new level of intensity. They’ll eat anything, be it the glue that holds a cardboard box together or a dead bug that I killed 20 minutes earlier. That’s right. They have no problem dismembering other bugs and carting away the parts. During a toona’i in Fausaga, I spilled coconut milk on the mat in front of me. Speeches were being given, and I didn’t want to make a big to-do, so I watched as the ants swarmed. They started taking spilled food that day as well. Phil and I watched one ant haul off a chow mein noodle by himself. It was impressive.

In any case, I estimate that I have at least 4 separate colonies in my house. I think they are different because I see them coming from separate places and discarding waste via dirt hills in different locations around the house.

Yes, I said dirt hills. Living here means sweeping every day in order to get rid of the piles of dirt that the ants build. Sometimes in corners, sometimes behind doors, always around the edge of the room near the baseboard, piles are usually between 2 and 3 centimeters in diameter after a day. Mopping is completely useless in fighting this problem.

For me, this has meant an extreme level of vigilance in keeping dishes washed and the counter clean. I’m weary of keeping much garbage sitting around, and I often eat food leaning over the sink to minimize any crumbs. Ants will eat bread crumbs in my house. They’ll eat orange peels. It’s gross.

I don’t have too big of a mosquito problem in my house (knock on wood). You can never tell when the little bastards are going to swarm though. I’ve been in the secretary’s office at my school twice now, and both times I was eaten alive. They are known to be out for blood at dawn and dusk, but they are known to hang around during the day too.

Mosquitoes are easier to kill than flies, but they are much more difficult to see. Sometimes you have to give credit to the evolutionary trends of insects. Sometimes I am able to spot mosquitoes, but they fly in patterns with so many zigs and zags that I am rarely able to watch one fly across the room without losing it.

I’ve heard it claimed that once your body gets accustomed to the mosquito venom, the bites stop showing up and stop itching. Given the threat of dengue fever, I’m not sure that’s such a great thing. Also, I don’t really want to get bit enough to find out if this rumor is true.

Koa sprayed a bunch of Surface Spray Mortein in and around his house and woke up to find 20+ dead cockroaches lying around. My cockroach problem has been minimal, although I do find the occasional roach scurrying when the lights go on. There was a dead one in my shower last week, so I put it in the toilet to flush. Did you know? Cockroaches are incredibly difficult to flush. Their disgusting bodies are lightweight enough that they just hover on top, weathering flush after flush.

It’s bad luck to kill a cockroach, according to many Samoans. Spiders too. This has not been a deterrent to most of us Peace Corps.

I believe I alluded to the Peace Corps Medical Manual’s strangely poetic description of centipede bites. Here it is:

Centipedes are another unpleasant type of insect found in Samoa… They seem to like to bite us for no apparent reason, often crawling into bed with us at night while we’re sleeping and wrenching us into wakefulness with their painful bites.

In any case, Samoans and Palagis can bond in killing centipedes. I’ve heard rumors that they can regenerate fairly easily, and that it’s necessary to crush them, and then to cut them into small pieces.

I don’t get flies in my house. They tend to be extremely common, and my host family had terrible fly infestations. I can’t tolerate that. I get one fly in my house, and I will hunt that fly down in cold blood. This outrage will not stand, man.

Moths and Other Flying Things

Sitting around with the fluorescent lights at night, the little bugs that can get past the mosquito netting get in. This is the worst. The stupid things have no fear of getting mixed up with humans. And while they seem to be harmless enough, it’s just gross to have things crawling around.

The other thing that sucks is late at night when I’m reading by flashlight. The light attracts little bugs that crawl around or try to fly in my eyes, etc. So it’s always a little satisfying when they land on the pages of my book, and a quick clap of the hands squashes the bug between the pages. ZING!

Mortein is the most common brand of bug killer out there. The active ingredients in Mortein are tetramethrin, phenothrin, piperonyl butoxide, and n-octyl bicycloheptene dicarboximide. I’ve heard that one or more of these chemicals prohibits Mortein from being legal in the United States (although it can’t be that bad if it’s made in Australia). It’s ultra poison. It’s carelessly harmful poison. And I’m okay with that for the time being.

The Surface Spray that I mentioned Koa using earlier smells like oranges. This is apparently intentional in order to attract cockroaches and other bugs to the poison, only to sock them with death blows. It’s clever.

Hope things are well. Creepy-crawly pictures below. They aren’t too bad. Just ants and a mosquito. No roaches. 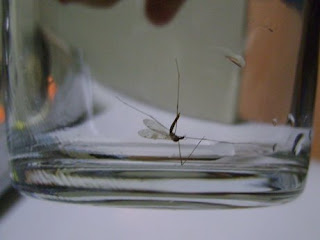 A mosquito that died on Phil's glass of water. I'm not very clear on how. But a dead mosquito is my favorite kind. 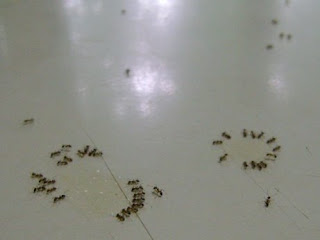 Pigs at the trough. I left the house without cleaning up two small drips of orange juice that fell on the counter. And these guys were waiting for me when I got home. 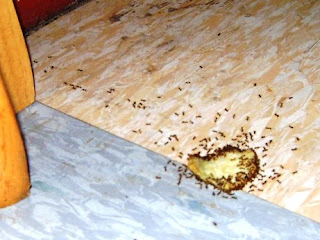 Koa was eating chips at my house, and one fell on the ground that he didn't pick up. It's maybe an inch or two wide. Gross. 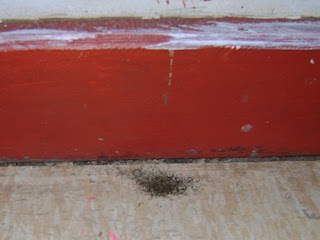 An example of a dirt pile. This picture doesn't capture who large these things can grow. It rained all day yesterday, and it seemed like it made the ants as lazy as it made me. 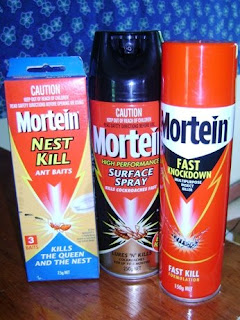 The Mortein Family. There's more, but these are my favorites.
Posted by Matthew at 5:09 PM

This post is why I couldn't do Peace Corps. But thanks for not going into too much spider detail!

I'm thoroughly disturbed & I may not be able to visit. Sorry.

The bedbugs were more than enough for me. I don't think I could hang with your ants. Too stealthy, too numerous.

Sounds like paradise! I am very interested in these centipedes you speak of. I might "loose it" if I were bitten by one.
Also, please explain why there are 3 columns of corned beef.
Hope you are well!
-Pigeon

Have you tried the blue ant poison? That worked the best for us! It comes in a small droplet bottle and works wonders!
-Jordan (Group 76)

Nick from Group 78 said that he could keep ants out of his peanut butter by surrounding it by a moat (placed it in the center of a plate of water). Said the ants didn't swim to it. Maybe you need to build a moat around your house!
Very interesting blog by the way, keep up the good work.

This is why my Grandmother was fanatical about cleaning up her fale after a) using the kitchen, b) eating, c) guests d) children.