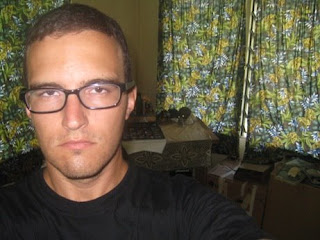 The original plan for today was for Phil to get groceries at his local store since it would be closing at 12:30 p.m. as is the custom here. And then we would go down and hang out in the wharf area of Savai'i until it was time to go home.

So we set out on this plan. Phil asked if I wanted to go to the grocery store with him, and since I had nothing else to do, I figured why not?

Our trip was short. Phil didn't need too much. I received a text message from my sister and I replied to it. I knocked over some plastic cups and looked at the price of clothespins. By the time I picked out an annoyingly expensive Gatorade, Phil was ready to go. We were gone approximately 15 minutes.

I had been futzing with my iPod just before we left. In fact, Phil was standing outside waiting for me as I set it down on the table I'm standing in front of in the picture above. So when I got home and it wasn't there, I immediately knew something was amiss.

Phil went to the kitchen to put away his groceries. He keeps his change in a large shell on his kitchen table, and when the change was missing, I became prime suspect. "Hey, Matt?" he asked awkwardly, "Do you know what happened to the change in here?"

"Ummm... I think maybe someone was here. Is the back door open?" And it was. And the mosquito screen next to the door knob was slashed.

We took inventory. In all, the bad guy(s) got away with my iPod and its charger, my digital camera (Pictures in today's blog were taken with Phil's camera), the headphones I use to Skype (because of the microphone attachment), and Phil's change. Phil's stuff was all in his bedroom, so it went unnoticed.

I'm mostly okay. It's just stuff, and it can all be replaced. There are 2 things that do really suck though. First is that the camera had a lot of pictures on it that I don't have stored anywhere else. And they're gone now. Second is that it just makes me feel weird about the people around me. I feel like my relationship with Samoa has been a little tainted, and while I am able to isolate this incident mentally, it still leaves a bitter taste. I'm not sure if I'm making sense, but I think you get the gist.

In any case, things aren't that bad, and I'll write a lighter, happier blog tomorrow.

Hope things are well back home. Evidence for the court below. 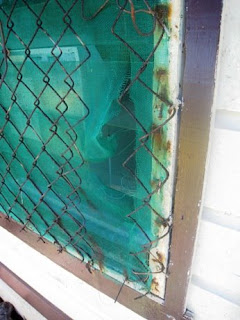 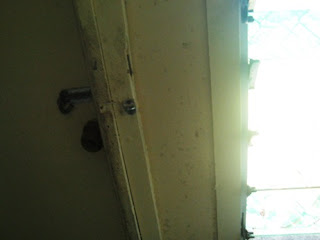 Exhibit 2. The point of reach-around.
Posted by Matthew at 5:30 PM