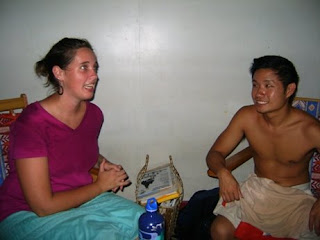 This week has been busy. I think in the lead up to school starting, people are getting antsy and restless, and where else is there to go in Samoa when you’re antsy and restless besides beautiful Apia? Hot and rainy Apia? And since I live within walking distance of downtown Apia, my place becomes a popular stop-in for weary travelers.

It’s a fun place to be. I get all the good gossip. And it definitely hasn’t been a very lonely week. It’s a weird juxtaposition from last Friday.

Tentative plans were made before I posted my blog yesterday for Mexican Night at Erik’s to finally happen. I called over when I was done, and it turned out that the evening hadn’t begun yet. In the end, it ended up being Supy and me from group 81 and Aaron, Max, and Erik from group 80.

Group 79 is gathering in town for their mid-service training this weekend. They’re heading out to the beach at Faufau, which is on the southeastern side of the island (I think?). When Supy and I were walking home last night we both notice a bit of an us and them feel to the evening, which I think it kind of inevitable when you have a bunch of guys from a particular group seeing each other for the first time in a while.

All in all, though, it was a fun night. Erik made tortillas from scratch using a wine bottle as a rolling pin. Wine bottles are extremely popular as rolling pin stand-ins here in Samoa. It was Supy’s job to scrape the label off the wine bottle, which was a surprisingly painstaking task. I chopped an onion.

Someone brought a bottle of peppermint schnapps, which brought a Jenny Schwartzkopf air to the evening.

The AA batteries in my camera died before I could get any pictures last night. Thus the skimpiness of the photos below.

I had a staff meeting to start determining the schedule of classes at 9:00 a.m. today. Class schedule is not the same every day like it was for me in high school; that is, on one day here, math will be second period, and another day, math will be fourth period.

One might think that the best way for such a schedule to be put together would be for one person to sit down, gather all the necessary information, and then plot the whole thing out. This person would be lauded for their efforts, and everyone else could do something better with their time. This is not how it happened here though.

We did the whole thing democratically. There were 10 of us in the room. One guy stood at the chalkboard with a meticulously drawn grid, adding things to the schedule when those of us seated at the tables told him to. This wouldn’t have been such a bad idea if complications didn’t continue to arise.

So today’s meeting was a bit of an ordeal. This seems to be right on par with most volunteer experiences at Samoan secondary schools. We ended the meeting after 3 hours, eventually giving up on the grid we’d worked on all morning, opting to start from scratch tomorrow morning.

The rest of the day has been rainy and overcast, which has been a welcome change to the ridiculous heat we had earlier in the week. Blakey and Supy stopped by this afternoon, as seen above.

I hope things are well back home. Just a couple pictures below. 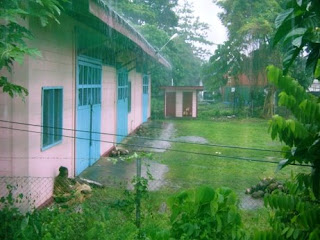 This woman sells coconuts right next to me (this picture was taken from inside my house). She gets there really early, and sits outside, rain or shine. It's pretty hardcore. 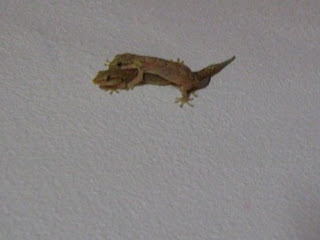 These are two lizards that were on the wall in my bedroom. I'll let you make up your own caption.
Posted by Matthew at 5:12 PM