Adventures in Simple IT and the Quotable Matt 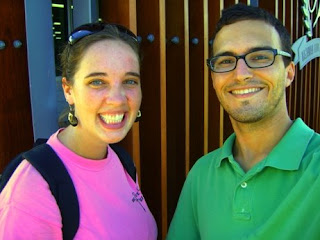 A lot of us were intimidated when the Peace Corps told us that we’d be working in IT here in Samoa. In fact, most in our group who came to do Informa- tion Communications Development have very little technical experience. Sure, I know Microsoft Excel inside and out, but when it comes to hardware issues, I’m clueless. That said, I’m pretty functional when it comes to fixing computer problems here.

I was walking past my principal’s office today when he sprinted out to grab me. “Can you help with the computer?!” He was a little frantic. I had nothing to do, so I came in to look at his computer. It turned out that he had somehow printed the same two documents 6 times each, and this was wasting printer ink since the documents totaled 7 pages between the two. I opened the printer queue and canceled all of the remaining print jobs.

Problem solved. I AM GENIUS.

Less than an hour later, a friend of mine at the Congregationalist Church headquarters called me to ask about a Microsoft Excel issue. He had a hard time articulating the problem over the phone, and I was going to be walking past the headquarters soon anyway, so I told him I’d stop by. The gridlines in his spreadsheet had disappeared because the cell pattern had been changed to white. So I changed the pattern to “No color.”

Problem solved. I AM GENIUS.

The ironic (isn’t it?) thing here is that the only computer issues I can’t seem to solve are the ones I get myself into. The Microsoft Office 2007 I have on my computer is a Trial version that needs to be purchased before January 31. I have no problem paying for it, but every time I try to pay for it, it doesn’t let me. It just keeps asking me to pay.

I also was unable to get the printer in my computer lab to print. I’m unclear if it’s just not on the network, or if there is a bigger issue than that. Really, I have no idea how the network works at all.

Right now, the plan is Max from group 79 is coming to town on Wednesday to help me configure the network in my classroom. I am counting on this being an enlightening experience. And really, how hard can it be? Afterall, I AM GENIUS.

In other news, I was sitting in my computer lab today trying to print, and I found the copy of Grosse Pointe Blank that I had copied on to my flash drive from Casey from group 80. The computer I was using didn’t have the correct codec (or any codec, for that matter) loaded, so all I could do was listen to the audio track. And when I gave up on printing, I played a little minesweeper while I listened to the movie, and the dialogue is sharp. I always knew this, but cutting out the video portion allowed the dialogue to shine more than usual. Also, how underrated is that cast? Dan Akroyd, Jeremy Piven, Joan Cusack and Alan Arkin are all solid. I love that movie.

I also listened to Ben Kweller for the first time last night. Erik described him as “fun,” which seemed odd to me—I’d always assumed Ben Kweller was some emo white kid who wrote songs about the misery of growing up a northeastern elite. But he is pretty “fun.” Who knew?

The school librarian called me aside today to chat. We spoke some Samoan… kinda. My Samoan isn’t good enough that I can carry on full conversations the way Phil and Koa did on various phone calls last week. My biggest problem is comprehension; my brain still has to convert almost every word into English and then string the sentence together. I never quite got to the point in training where hearing what was being said was second nature. But anyway, with the librarian today, I peppered the conversation with whatever Samoan I could throw in.

She seemed pleasantly amused. I AM GENIUS.

Who’s not pumped for the inauguration? I’m hoping for a timeless catchphrase a la “Ask not what your country can do for you…” Here are some Mattisms from the Daily Concise Advice I’m willing to lend to Barack Obama:
Yeah, you’re welcome.

Hope things are well back home. Pictures below. 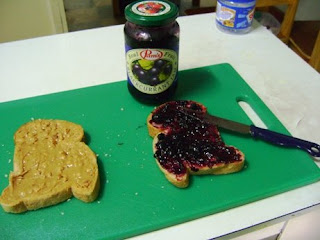 This is the black currant jam I was talking about yesterday. Hard to see the little grape-like fruit, but they're there. But yeah... hard to spread. 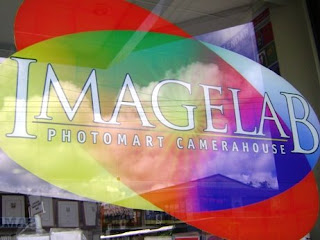 This store is at the end of Palagi Alley, so known for the white tourists that frequent the area. I really like it because it's called "Imagelab Photomart Camerahouse." 3 compounds words, all of which are not real, and each would be sufficient on its own as the name of the store. 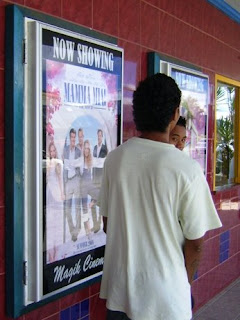 These guys are standing in front of a Mamma Mia! poster, which is showing again at the only movie theatre in Samoa. It's been playing on and off at least since we arrived, and probably for a couple months prior to that. Eagle Eye has also been playing here forever (Eagle Eye?).
Posted by Matthew at 4:04 PM

i think its funny that they show current movies at magik cinema at like less than half the price they are charging now in NY. SWEET! minus the whole- if you dont get enough people who buy tickets to watch that particular movie, they have to show another one that has sold enough- and its your fault if u werent aware and end up watching something totally different.

Possessive pronouns do not have apostrophes! I'm referring to the caption under the Imagelab photo. Its not it's. How much was that USC education? :)

Perhaps Matt means: It has been playing on and off...

I was referring to when he says "sufficient on it's own" - no apostrophe necessary. Anyway, the whole grammar police thing is an inside joke! I love the blog and I know the entries are typed in a hurry so I won't criticize grammar or spelling errors in the future.

The same thing happened to me with my Microsoft Office2007. You should call the customer support folks out in Microsoft (I think they have an international number) to get that 2007 version squared away.

I thought I was the grammar police! Who took my place? It must be someone I know.
'You can't make a burrito without spilling the beans' - you have too much time on your hands!

I don't like to muddle in the comments section... but Grammar Police, how you gonna call me out for "it's" and completely ignore "I AM GENIUS"?

Oi sole... lolololol... am I the only one enjoying everyone's humor? Now, kiss and make UP!

I AM GENIUS is perfectly legal - it connotes your state, such as I AM KING!, or I AM WOMAN! Hear Me Roar! (Hellen Reddy). The contraction "it's" is like driving down a one-way street, it is against the rules, no matter how it is presented. It's wrong. However, I am more concerned about the proper and improper uses of pronouns 'me' and 'I,' for which the rules seem to have melted away. Whatever happened to the nuns at Catholic school! But what the hell, I was once told if you understand what the message says then what's the problem.