Note: “Sandals” are so popular here that they are often referred to, at least among Peace Corps, as “shoes”. I use the terms interchangeably here in this particular post, and on the blog in general. 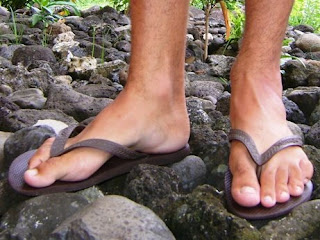 I wrote in an earlier blog that of all the body parts, feet have the most difficult life of all here in Samoa. There’s the landscape, the dirt, the grime, the coral, the rocks, the mosquitoes, the uneven pavement, the lack of pavement, the heat, the rain, the ankle-deep puddles, the biking, and the dogs. Footwear becomes important here. Actually, that’s a bit assumptive. Footwear is either incredibly important or completely unnecessary in Samoa depending on who you talk to.

Sandals are, of course, the footwear of choice in Samoa, which seems simple enough. Yet choosing the right sandals to bring over was difficult because of the limitations laid out in the packing list. The tropical climate makes leather difficult to maintain here on account of the humidity. The humidity is also pretty rough on rubber.

In the end, I opted to bring my inexpensive run-of-the-mill Havaianas (pictured above). This was brilliant on my part. My sandals are comfortable and cheap, and they handle water well. Aside from the occasional blister when things get too hot and sticky here, they hold up well to the elements, and they don’t become rank and rancid.

A number of the other members of group 81 have started to wear the most popular Samoan footwear, Jandals. I’m not sure where Jandals come from or how they get their name, but they also cheap, and the top of the sole is white. This is important because, particularly in village life, sandals spend a lot of time in the sun. And slipping on a pair of sun-drenched black sandals can be worse than walking across hot beach sand.

The only differentiating factor between two pairs of Jandals, besides size, is the color of the plastic strap. They come in red, yellow, green, and blue. This starts to get complicated when you enter a household with many people. It is always customary to remove your shoes when entering a house in Samoa. This goes for village houses, urban dwellings, Peace Corps habitats, the Charges-Affaires mansion, etc. So often at large events, you see people taking off their Jandals, and then surveying the rest of the shoes around to ensure that they will be identify theirs later. This is also why it wasn’t that surprising when Phil’s sister, Tafale, had her sandals taken after a dance practice. Her subsequent borrowing and keeping of my Havaianas speaks to the greatness of my sandals, I think.

And then there are the people who go barefoot. It’s not common, but it’s not unusual either, to see a person walking down the street in Apia completely barefoot. This is not normal inside shops or the grocery store, but walking down the street or working at the market or fishing along the ocean wall or hanging out in the village are all completely acceptable places to be barefoot. What’s really amazing to me is the way the children become accustomed to being barefoot.

When Akanese was first introduced to me, I was told that she is notorious for losing shoes. I think a large reason for this was that she’d take them off to play or enter a house or run around on the grass, and then her brain wouldn’t register that shoes were necessary when walking over more jagged or hard ground. Many places in the village would have lava rocks strewn all over the ground, similar to rock gardens (Isn’t that what it’s called when you just have a bunch of rocks in your front yard? Maybe my Americanisms are getting rusty.). Lava rocks (also pictured above) are sharp and uneven, and I’d sometimes have to walk slowly over them to maintain balance. Akanese would play tag with the other kids on the lava rocks. And they’d all be barefoot. It was mind-boggling.

Proper shoes, i.e. tongued, laced, heeled foot covers, are pretty rare in Samoa. I wore running shoes when I went running our first week here. I haven’t worn shoes (or exercised) since. I wore my TeVa sandals once at the beach in Falealeupo, but I plan on wearing them at reef beaches from now on.

Finally, while Havaianas are perfect for this climate (which isn’t surprising since they were developed in Brazil), they are not sold in Samoa. A pair of size EUR 43/44 black, white, and/or brown Havaianas wouldn’t be too expensive to mail, and would make for an excellent birthday present. Hint, hint. :)

Tomorrow’s Cultural Exploration, which will be the last for a while: Consuming Liquids.

I hope things are well back home. Feet pictures below. 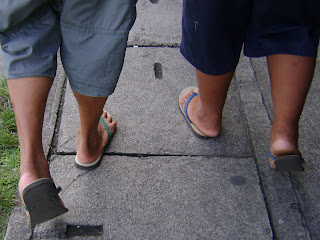 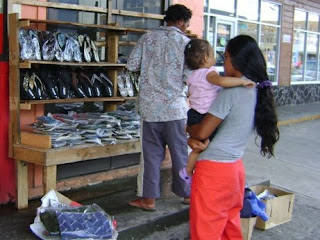 A typical shoe store in Apia. 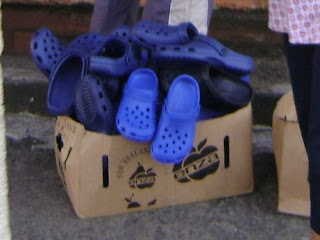 A box of Crocs, which are also somewhat popular here. Almost always referred to as "Shower shoes." 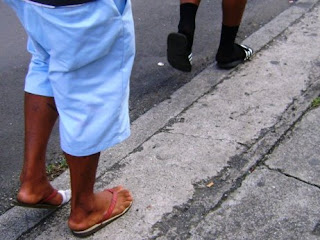 A little contrast here. Typical Jandals to the left, and dress socks with Adidas slippers to the right. Huy? Is that you? 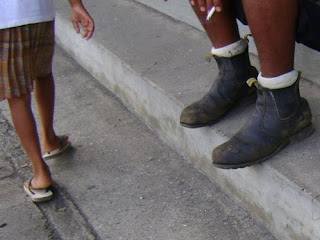 Once again, Jandals to the left, real shoes to the right. 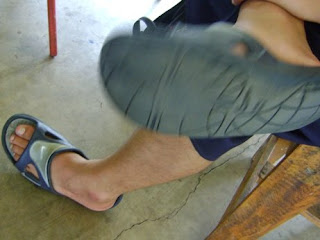 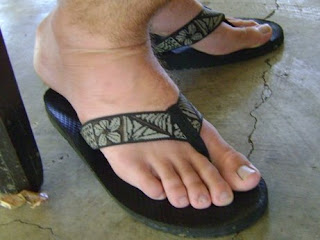 Phil wearing the shoes his family gave him when we left the host village.
Posted by Matthew at 4:58 PM

I love "Sandals" (I call them slippers). I hate wearing socks. For me, socks and shoes are only appropriate in two places: work and the gym. I enjoyed your sandals post, especially of Jandals. I am wondering why you haven't tried them yet? Or maybe you have and just like those Havianas (sp?) better. --Margarita

Many different styles of dance shoes are available for you depending on the type of dancing you do. If you are into ballet, you know you need flexible, soft sole shoes that allow you to move your feet as freely as you do without any shoes on. If you are looking for tap shoes, you know you need hard soles with a good feel and sound to them.

LOL.. love the comments which refers to footwear.. yeap! in samoa anything goes.. before shoes was discovered back in those early days.. they had this saying "beat the feet".. foot without shoes was common then.. but today..ahem.. I don't think so!! its why people ended up with crooked foot.. nice blog