Note: Yes, today was my first day of school, but being that I didn't teach--I never planned to since students clean for the first week-- I figure I'll put off talking about that til tomorrow. Also, I was up til 2:00 a.m. writing the following thoughts. So I figure I'll validate the sleep deprivation and post today. School news tomorrow. 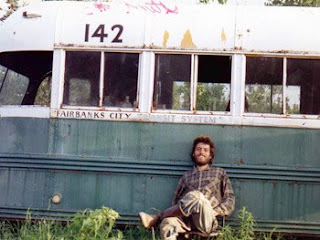 In the copy of Into the Wild my dad sent, he put a note in the pages saying that he had read the book after 2 of his colleagues had an argument about it over dinner on a recent business trip. Well I just finished watching Sean Penn’s filmic adaptation of Jon Krakauer’s book, and I think Mr. Penn and I would have quite a lively argument.

What a garbage movie! Sean Penn is obsessed with melodrama and milking a moment for more than it’s worth. He also has a tendency to go for ridiculously over-the-top symbolic imagery that feels more and more like a cheesy student film. My biggest qualm with the movie though, is in its portrayal of the protagonist’s philosophy.

Part of what makes the book so engaging is that Krakauer’s starts with asking what lit a fire under Chris McCandless’s ass. Krakauer had his own Great Alaskan Adventure, and so with a sense of kinship, he seeks to understand McCandless. Krakauer follows the guy’s journey while weaving in experiences from his own youth. He talks about their common love of adventure and the fact that they both had overbearing fathers.

Sean Penn takes the rebellion angle to heart and makes it the focal point of the movie (Right down to the “Last Temptation of Christ” ending, which was stupid, but I just read that too and it was an interesting coincidence).

The thing is, Krakauer also epigraphs each chapter with quotes from Jack London and Henry David Thoreau and Leo Tolstoy and others. And what Penn overlooks is McCandless wasn’t just running from his parents, he wasn’t only fleeing society. He was heeding the call of the wild. He was giving in to his compulsion to find the joy and sorrow and solitude and triumph and sacrifice that adventure provides. It’s the same thing that compelled Jack Kerouac and Thoreau and Larry Darrell in Sommerset Maugham’s The Razor’s Edge. Hell, it was what called me to join the Peace Corps.

Yeah. I guess I feel all riled up about Sean Penn missing the point because I think I feel my own affinity for Chris McCandless. I’m not claiming to be nearly as hardcore as the guy in way, shape, or form. He hitchhiked for 2 years and shot a moose in the backwoods of Alaska; my Peace Corps experience has me typing a blog entry on my laptop. I realize there’s a discrepancy there. Nonetheless, I think a large part of my being here has to do with a similar calling, that same compulsion.

Krakauer points out that McCandless highlights this passage from Tolstoy: “I wanted movement and not a calm course of existence… I felt in myself a superabundance of energy which found no outlet in our quiet life.”

Larry in The Razor’s Edge: “ I thought I’d start by going to Paris… I don’t know why , but I’ve got it into my head that there everything that’s muddled in my mind would grow clear.”

My late grandpa (whose birthday is today) on Creedance Clearwater Revival: “I really like them. They hit on something deep down. Something primordial.”

Some join the Peace Corps with a very specific goal in mind. Some want to share their gifts with the world. Some want to learn a new language, to see a new part of the world, to build up their resume. And I guess I want to do all those things. But more than that, I felt a calling. A voice inside. Something primordial.

And how do you feed an insatiable urge like that? You do something to change it up. You hitchhike for 2 years and shoot a moose in the backwoods of Alaska. You climb a bad-ass mountain. You move to Paris. Or Samoa.

McCandless himself writes, “Nothing is more damaging to the adventurous spirit within a man than a secure future. The very basic core of a man’s living spirit is his passion for adventure. The joy of life comes from our encounters with new experiences and hence there is no greater joy than to have an endlessly changing horizon, for each day to have a new and different sun.” I don’t think he’s advocating that we all become hobos, but I think the call for drastic change is there.

Yesterday morning, I was making small talk with the family I met at mass, and the daughter asked me why I joined the Peace Corps. And my answer was, “To come here.” I don’t relate this story because I thought the moment was wise or profound; I just think it’s interesting that I didn’t say I was fleeing a terrible economy or coming to rescue Samoan students from the pitfalls of Microsoft Excel. I came to feed the insatiable urge. You know… that superabundance of energy.

This is a promotional photo from that crap movie. The real Chris McCandless is picture at the top of this post.
Posted by Matthew at 5:08 PM

ok you got me. i am so buying the book.

and the students clean the first week? clean what?

Apparently you felt the same as I did when you finished the book: sad with low-level anger. And you made the mistake of watching the movie. As I mentioned in my note to Margarita, there’s no way the movie could capture the essence of the book. I’m not sad that Chris died, but the way he died. Had he been chased, killed and eaten by wolves, or shredded by a grizzly bear or died in great runoff of the river, then I would understand. But, he wasn’t… I won’t go on because others might want to read the book. My coincidence was that I read Chopra’s “Buddha, ” Krakauer’s “…Wild” and Hess’s “Siddhartha” all in a row. Maybe Someone is telling me something. “Wild” clearly hit more than any book I’ve read recently.

By the way, you used the word discrepancy to differentiate between your adventure and Chris’s. No. The term ’a juxtaposed path with (possible unanticipated) disparate dangers’ might be better. Remember Pi Patel.