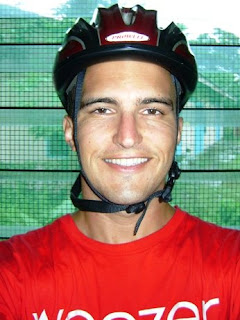 One of the things I felt most excited about in working for the Peace Corps here in Samoa is the bike. I’m not sure I can articulate why I felt that way. I had a bike in San Francisco that I almost never rode. But then again I had books I’d never read, journals I’d never written in, dreams I’d never fulfilled (yeah, I said it.). So I figure now is the time to do a lot of the things I always meant to do. And now I can. With my bike!

I got a Trek 3700. It’s a 21-speed. A lot of the people in our group are unhappy about the size of bike they got, but I don’t really care too much. I have no idea what size my Schwinn was in San Francisco. In any case, I can reach the pedals and my knees don’t poke me in the face. So I’m happy.

I was also able to replace my digital camera today, as you can see. One of the shops here had a Christmas deal where you got the camera, the memory card, and the carrying case for one low relatively low price, and they let me take advantage of that deal. The one I got is a Sony CyberShot, somewhat similar to the one that was stolen. One difference is that it runs on AA batteries. I’m slightly skeptical of them as opposed to Lithium Ion, or whatever I had before. I did bring rechargeable AA batteries though, so things are all right.

One inhibitor to bike riding is rain. It rained again last night for about 5 hours, and it’s raining again right now. Christian from group 78 tells me that last January it rained for 23 days straight and that December ’07 was much wetter than December ’08. I’m not sure what this means for my laundry situation. I figure I can don dirty duds for the time being and if things come to a head, I can pay to have my clothes laundered in a machine.

I ran into volunteers Jacob and Ryan last night. They were eating at Italiano Pizza, and I was walking home from Farmer Joe supermarket (Note: Italiano Pizza is almost always referred to as “Italiano’s” and Farmer Joe is also almost always referred to in the possessive, but I figure for journalistic integrity I’m going to call each by their real name.). I sat down and shared the pizza they’d ordered. I’m a little nervous about living in Apia and constantly living with the temptation of pizza and other restaurants around, mostly for monetary purposes. But I don’t think I’m in any danger of going bankrupt quite yet.

I don’t have any updates on the break-in to report, other than I heard from a secondary source that the police told Phil there may have been an escaped prisoner in the vicinity on that particular morning. This seems a little dramatic to me – kind of in the same vein as when the police officer told Phil that it’s too bad that he’d touched the lock already because they could have called in the guys from Apia to take fingerprints. “And do what with them?” Phil asked me on the way home. “Put them in the database of meaningless garbage?” Yeah, I don’t think they’ll be producing CSI: Samoa any time soon – Nor Prison Break: Samoa, for that matter.

Anyway, I hope things are well. Bike and other pics below. 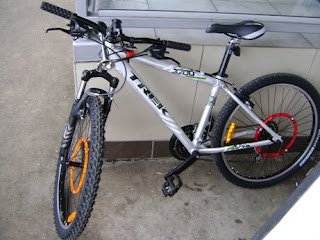 This is my bike! 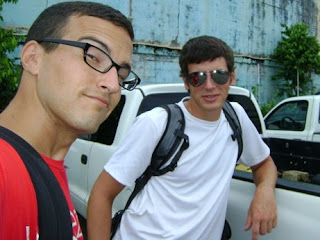 This was a chance run-in with Paul just after I bought the camera. I like this picture because you can see me taking the picture in the reflection of Paul's sunglasses. 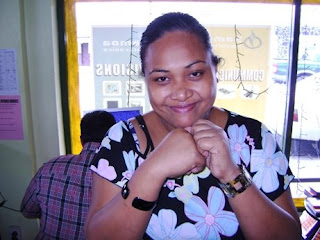 This is the test picture I took to make sure the camera works. This was the only time the sales girl smiled during our entire interaction.
Posted by Matthew at 5:22 PM

Labels: Biking, Moving On In