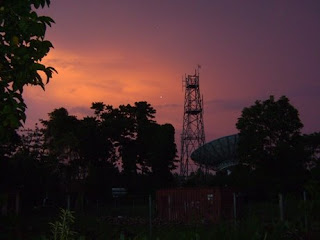 I remember my freshman year at USC, I was all alone on a Friday night. No one was on AIM, all of my roommates were out, Sara was busy and/or not interested in doing anything. I think I had an abnormally difficult transition into college, but Friday nights were the most painful. Who stays in alone on a Friday?

How times have changed. After I finished using the internet last night, I walked home and the thought of spending the evening alone felt like a relief. The Peace Corps is not something one does to get rich quick, and making the small monthly stipend last through the month makes budgeting necessary. This past week had a lot going on too. I had to actually get up and go to work for 3 whole days. Exhausting!

It was began to drizzle when I was halfway home, and by the time I was at my door, the rain clouds were reflecting the pink sunset, and the entire sky was a crazy shade of red.

I was feeling lazy, so I just had peanut butter and jelly for dinner. The grocery store was out of boysenberry jam yesterday, so I was forced to get black currant. I’ve never had black currant before. I thought currants were large—like the size of an apple—but the little fruit in the jam are the size of grapes. This made spreading the jam awkward. Boysenberry is my favorite because it tastes good AND it can be chunky and spread easily at the same time.

I’ve been trying to limit myself to one episode of Arrested Development and one episode of The Wire per night. So I watched those while I made curtains for my bedroom. I have curtains on every window now except the little one over my bathroom sink. That might be a project for tonight. In any case, sewing curtains takes forever, and I wasn’t half done when The Wire ended (I watched Season 1 Episode 5 for both series last night. Lindsay tried to save the wetlands, and Poot and Wallace spotted Omar’s boyfriend playing pinball at the Greek place.), so I listened to The Blue Album, The Green Album, and half of The Red Album until I finished the curtains.

See, a PCV from group 80 who went home for Christmas was able to secure a bootlegged copy of “Slumdog Millionaire” and I got it from him, and I wanted to finish the curtains before jumping into a bilingual movie. So yeah. Once the curtains were complete and hanging, I watched the movie. And then I went to bed. And that was my Friday night.

I think it helps to know that most other Peace Corps are having the exact same amount of fun. In college, my lonely Fridays felt incredibly pitiful compared to everyone else, but here, peanut butter and jelly and a movie is right on par.

Saturday morning hasn’t been too wild either. I think people were going to a local bar to watch the NFL Playoff game, but I’ve spent a lazy morning reading, napping, and listening to music.

Other volunteers told us this would happen. We were told, “There will come a day when you’ve got your place together and you’ve bought enough food to last you for a while, and you’ll decide to not leave your house for 2 or 3 days.” That time has come.

Although, yes, I do still need to leave my house to post this on the Internet. Speaking of, I stopped by SamoaTel yesterday to inquire about the phone line that I’m supposedly getting in my house so I can get internet there. They told me that my phone line doesn’t work, but that I do have a phone number. It was a bit perplexing.

In any case, times are lazy here. And I’m cool with it.

Oh... a few responses to yesterday's comments. Paul's mom, Jane, is right in pointing out that Tetsuya is Paul's roommate. I forgot to say that. Also, yes, Reeda, my school year starts the Monday after next, January 26. Government schools start the first week of February, I think.

Anyway, I hope things are as lazy back home as they are here. A couple pictures below. 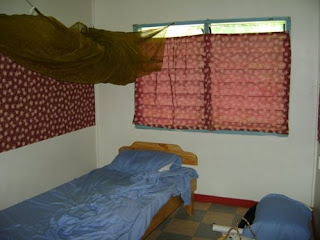 My new bedroom curtains. The way the light shines through gives the room a dark red glow that is not unlike a brothel. 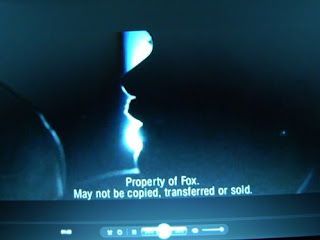 This is the warning at the beginning of the copy of "Slumdog Millionaire" that I watched. It's an award season screener. 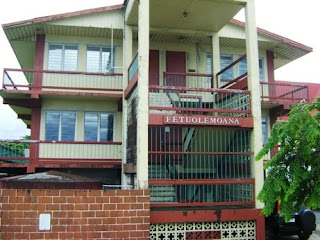 This building is next to the Catholic church here in Apia. It says "Fetu o le Moana," which means "Star of the Sea"... which is the name of the Catholic Church on Geary.

I was planning to watch Slumdog Millionare legally next week. Funny that you were able to view it all the way in Samoa while I am still trying to schedule a time for me to go to the movie theatre down the street.

So did you like Slumdog Millionaire or what??? It's pretty cool that we watched it at kind of the same time. I love the curtains in your room. I'll expect you to make me some for my room.