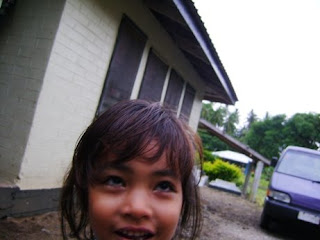 I just realized that my trip to the village last night was the shortest I’ve taken; all the other times I stayed for at least 3 days, but last night I arrived around 6:00 p.m. and I left this morning just after 8:00 a.m. And sitting down to write about it, I still feel a little overwhelmed. The village is so interesting and so different from life in America—and even life in Apia, for that matter—that I feel like it’s incredibly difficult to capture in words. And it’s not just the sights and sounds and smells that are different. It’s the way things work and the way events occur and the general way of life. For example, within 20 minutes of arriving in the village, I was handed a baby and a piece of fruit, which I’d never seen or heard of before let alone tasted. But I’m getting ahead of myself.

My meeting went long yesterday, and it was a bit of a scramble to post a blog, purchase some credit for my phone, pick up some food for the family, and make it to the bus by 4:00 p.m. One fun thing about taking the bus back to Fausaga is that you get on a bus headed to that region, and there is usually 4 or 5 Fausagans on the bus already. And because the village is relatively small, and because there were only 13 Peace Corps in our group, everyone in the village knows my name. I’m kinda big in Fausaga. Ha. So when I got on the bus, a bunch of Phil’s distant relatives were already on, and they invited me to sit with them.

There is a code to riding the bus. Men sit in the back, women sit in the front. Older people are given priority seating. When things get crowded, people sit on each other’s laps. Women sit on women’s laps, men sit on men’s laps. And so on. However, being palagi trumps all, and even if I try to follow the rules, I am stopped. “No, no. You sit there.” Fine.

My family was at Kate’s family’s house when I arrived. It’s a short walk across the village, and I headed over. It was kinda fun to walk across town because I’m kinda big in Fausaga. “Mālō Mati!” I heard over and over. When we lived in the village, this celebrity status meant no privacy. But after living in the anonymity of Apia for a month, sometimes you want to go where everybody knows your name and they’re always glad you came.

Kate’s family’s house is near the house where Phil’s sister’s sleep, and when I walked by, Tuese was sitting out front. I’ve kept in good touch with her, and it was good to see her. We did a little catch-up, and she gave me a piece of fruit called an ifi. It looked a bit like a mango on the outside, but I guess you only eat the inside. “Old people eat this,” she told me. Okay. There were also palm leaves strewn all over the lawn. Phil’s other sister, Tafale, was apparently drying them in the sun so she could weave mats, or fala. Okay.

Tuese walked me over to Kate’s house. My family was excited to see me. Asolima handed me the baby. The baby was born April 18 last year, so when we first arrived in the village, she was exactly 6 months old, and now she just hit 9 months. It’s crazy how fast babies grow and develop. In addition to being physically bigger, she’s working on talking and walking now, which is very entertaining. At Bingo last night, she chatted baby nonsense for an entire game at one point. The Bingo crowd couldn’t decide whether to laugh or to shush her. But once again, I’m getting ahead.

We left Kate’s house pretty quickly and headed back home. I gave Mele the bag of apples and mangos I’d brought. We sat outside and chatted. And after not too long, it was time for evening prayer.

Mele had to do some searching to come up with the songbook and bible. I’ve often wondered how much the praying is routine and how much is just a charade they put on because I’m there. In any case, we sang song #98, which we sang almost every night during training. At this point, I’m very familiar with the tune, but I still don’t know all the words to the verses. I meant to copy down the words. Maybe next time. I read Psalm 1 in Samoan. I’ve gotten pretty good at anticipating punctuation and sounding like I know what I’m reading about.

After prayer, I asked Asolima if she had the Vaniah (sp?) CD. Vaniah is a Samoan singer, whose album is extremely popular here. His voice makes him sound like a Polynesian Aaron Neville. While the album is overplayed, a bunch of us in group 81 want it for nostalgic reasons, but it costs somewhere around $50 WST. So I was going to burn it.

But Asolima didn’t have it. She put on different music though, and while she prepared dinner, Akanese danced. This was a new development. I’m not sure what happened, but when she thought no one was looking, she got up and started doing a little Samoan dance. And, though it bugs me to say this, it was darling.

Over dinner, Asolima told me, “When you’re done, we’ll go shopping.” Okay. We hop in the van and head over to Vai’e’e, which is 2 or 3 villages over. It turns out Mele needs a new bingo marker; afterall, Friday night is Bingo night. And by the time we get back home, it’s time for Bingo.

The baby fell asleep in my lap on the way home, and Oge ended up sleeping at the plantation last night because someone has been stealing the family’s taro. So with no one to watch the sleeping baby at home, we brought the sleeping baby to Bingo. Okay.

I failed to get anything close to Bingo last night. Also, it’s funny how at the beginning of the evening, I’m really good at hearing and comprehending the bingo numbers. But as things grow long, my brain starts to get baffled. Ono, which means six, starts to sound like uno, which is one in Spanish. And tolu, which means three, just doesn’t mesh with my synethesia.

After Bingo, we went home and caught a bit of “Lost,” which they show here on Saturday nights. The family tried to get me to sleep in the big bed in the house, but this felt weird to me. Why wouldn’t I sleep on my little tiny mattress. They said it was because my room was messy. It’s hard to know when to accept what the family tells me and to do what they say, and when they’re trying to be nicer than they need to be. So I insisted on taking the bed in my room. That seemed to go over okay. And I slept well.

I needed to be back in Apia before 11:00 a.m. today, but I didn’t want to seem too rushed. It worked out okay. I got up around 7:45, had a chat with Mele, ate papaya and panakeke for breakfast, and headed out.

I should also mention that Paul and Supy also stayed in the village last night. They arrived earlier in the day, and left later in the morning. Show-offs. Also, my Havaianas were apparently stolen from Tafale. She is, once again, shoeless.

I have much more to say. Maybe some other time. Some photos below. More village photos tomorrow. Hope things are well. 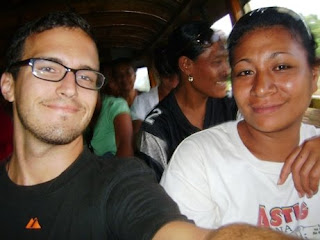 Me on the bus, with Soloa (in white), and Samoa behind us (in black). 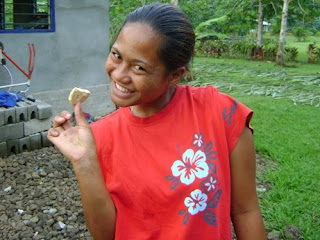 Margarita was asking about food, so I went to take a picture of dinner. But when Asolima saw that I was taking a picture, her plating instincts went into high gear. "Wait! Wait!" she yelled. She added the mug. And then, after thinking about it, the apples. All 3 pictures are here. 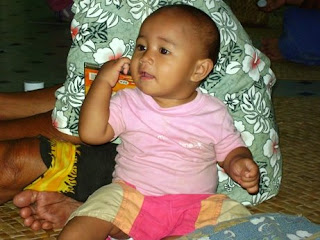 The baby at Bingo. 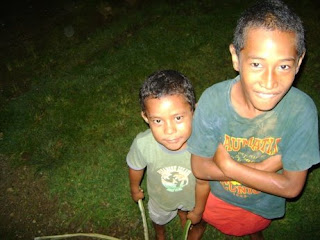 Matatia and his friend, who's name I can never remember. They were chilling outside Bingo.

hey thanks for the greatly appreciated pic! sorry to nitpick... what WAS that you were eating? looks like bananas with sugar/sauce on the right and, some sort of chicken stew on the left with papayas? I recognize the tea and apples and yes you are right, Asolima IS an excellent plater. Those Top Chefs have nothing on her.