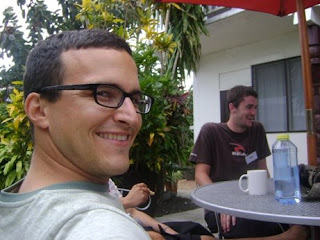 October marks the start of Samoa's rainy season, which lasts through March. Yesterday was the first day we saw rain. When we came out of our Intro to Medical Services session, it was sprinkling. It's difficult to see in the picture at left, but it's our first rain. Also in the picture is PCT Phil, who was also my roommate during training in Los Angeles. Weird because he looks very similar to my junior-year roommate Ben from USC.

We did receive our Samoan names this morning. My Samoan name is Mati. Originally my Samoan name had been Sefo because they had my name listed as Joseph, but they changed it to Mati. By sheer coincidence, Mati is also the month of March in Samoan. They were delighted to find out that my birthday is in March. So I guess it all works out.

After training, we took a walk down to the harbor to see what we could see. We took some pictures and found a mysterious fruit and ran into some American vetrinarian who some people from our group recognized from our plane and who is working with the Samoan equivalent of the ASPCA. I also bought some candy from a kid who was selling from a box. I got to use my Samoan when I thanked him. I said, "Fa'afetai," which must have been said correctly enough because he responded with a rote, mechanic mumble, which I assume was the Samoan equivalent of "You're welcome."

I also said Malo to another kid we passed on our walk. He responded with a "Talofa lava," which is the respectful response; the "usted" response, if you will. It was cute.

We went to a Chinese restaurant for dinner, during which we heard:I know you're all jealous, but I'm sure you can create your own playlist on iTunes or Imeem.

Also, the Chinese food is surprisingly good here. I'm not sure why that's surprising given Samoa's geographic proximity to China, but for some reason my expectations were pretty low.

In any case, plans for today include typhoid vaccinations (JEALOUS.) and some supposedly really fun language activity.

On that note, I have two housekeeping issues for this blog:More pictures from today: 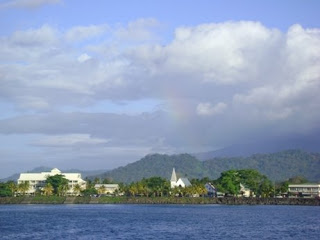 This is the first rainbow we have seen in Samoa. The camera didn't pick it up very well, but you should be able to see it in the clouds in the middle of the picture, just above the pointy church. 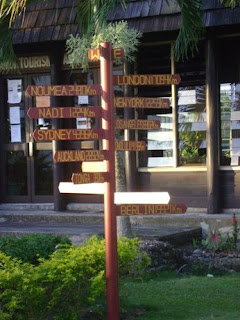 A sign in front of the Samoan Tourism Center showing distances to Los Angeles and Hawai'i among others.
Posted by Matthew at 1:03 PM

I enjoyed your story about your Samoan name. Is it pronounced like how I call you Matty??

I am enjoying your blog & excited to see all your pictures!

Also, that picture of you smiling looks like my FACE! Victor agrees. Twinsies!

Avo came over today to see the pictures on your blog. I think she felt better when she saw how much that one picture of Samoa looks like the Azores!

i like your comparison to 'usted.' it made me understand. thanks matt!
be safe!

"Arthur's Theme (Best that you can do)" is the name of the Christopher Cross song.

For bonus Trivial Pursuit points, it won an Oscar in 1981, and was co-composed with Burt Bacharach.