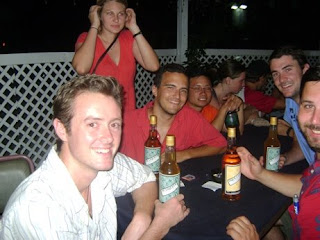 Thursday night was "Gender Night" during which the girls went to a volunteer's house here in Apia to talk about women's issues in the Peace Corps and the guys headed to a sports bar for dinner and drinks. It turns out that the sports bar was having a charity trivia contest that night. It was slightly different from all the trivia contests I've been to in San Francisco in that we had to pay to enter. It cost $40ST for a team of four, and proceeds went to helping a Samoan boy get a cochlear implant. I am always down for trivia, but I wasn't sure if anyone else in my party cared enough. Luckily, they had quite a bit of alcohol lined up as prizes and the odds seemed in our favor that we would at least win something. So we joined.

Questions were geared toward Austrailian/New Zealand trivia topics (e.g. which rugby player was recently traded from the Allblacks, etc.), so we were definitely at a disadvantage. We got some lucky guesses in though, and we ended up taking second place. My team was impressed that I could define triskaidekaphobia without skipping a beat. Pictured here is our team with our prizes, one bottle of Ginger liquer each... PCV Dylan is in the foreground (yes, he looks and acts like the lovechild of Conan O'Brien and Kyle Maclachlan), me, Phil, and Gore.

Last night was our fiafia, a party to welcome our group to Samoa. Volunteers dress up in Samoan garb and perform dances. It was a fun night.

I left home in an effort to see the world and to prove myself to me and maybe others. I came to a strange island inhabited by a mysterious people and was employed to work on outdated computers. And there was homesickness.

I'm not talking about me, of course. I'm talking abut Desmond from "Lost." There was an episode of "Lost" this past season titled "The Constant" in which Desmond goes a bit crazy, and I'd say it's just about the best representation of homesickness that I can think of. Incidentally, it's also my favorite episode of "Lost". I can't link to it right now because I'm on dialup and I don't have time, but I'm sure it's available on ABC's website, and it works well as a stand alone episode. No need to have any background in "Lost" lore. But anyway, I've been thinking about that episode a lot lately and trying to find my own constants here in Samoa.

We head to the village this afternoon, and I expect things to get a little more intense. Bucket showers with well water, home-cooked food, no air conditioning. Things may not be that bad, or they could be horrible. Whatever happens, I'm excited to talk on my cell phone, to read, and to keep some constants around for the hard parts.

We'll be in the village all week, returning next Saturday, so I won't be able to post anymore blogs until then. Hope you all are well. Have a great week. Pictures below. 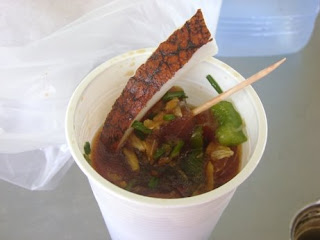 Poke cup from the local fish market. It would be better with wonton chips, but on the whole, a fantastic lunch for $5ST. 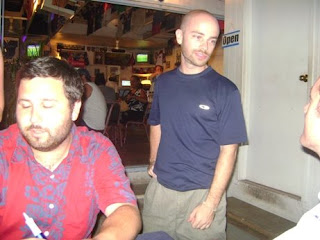 This is PCV Todd standing up in the blue shirt. He looks like Kevin's long lost brother.
Posted by Matthew at 11:04 AM

Labels: Food, In the beginning, Training

Hey...thanks for the post. It is so nice to be able to read what you're experiencing...even the tough stuff. I think of you often and hope that you are listening, asking, listening some more and being really gentle with yourself. Ok...no more therapist gibberish. Just be good to yourself. We love you!

Looks like I will have to watch that "Lost" episode...You peaked an interest. Thanks for including American Samoa on your map on your blog. I had no idea it was so much smaller. I will be following your blog with interest!

I hope you are able to post soon! I miss hearing what you are doing. I love you tons! Kaky

I want a poke cup. Bring me one. NOW! I hope you had a good week. I'm excited for your next post! I hope you include pictures of your tiny tot admirer. Love you!

How do you not smell that peppa!!

OMG I love that episode of LOST! When I went home in May my mom had ti-voed it for me. I cried so hard. PC Samoa totally is a spin off of Lost.