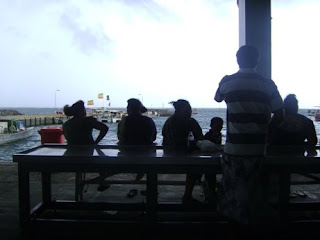 Yesterday was (hopefully) our last day of introductions. I really thought the day before would fulfill all introductory necessity, but today we endured more. Intro to Language, Intro to Life and Work, and Intro to Cross-Cultural relations. I also got my Typhoid vaccination. The shot was short and painless, but has ached a little ever since... much like a Tetanus shot.

After everyone else got shots, we sat through a short-but-thorough lecture on Diarrhea. While there were no pictures, this talk was as verbally disgusting as one can expect, but was given with the nonchalance of a seasoned nurse. Teuila (We were told to pronounce her name like Two-wheeler, except more New Zealand-y... i.e. Two-wheelah), the Peace Corps Medical Officer, through out phrases like "greasy feculance" with reckless abandon. Teuila's voice has a natural, soothing cadence that is prone to making my mind wander, but it was quite a rude awakening to have that tranquility busted by "puss in the stool." Such is life here.

A bunch of us walked over to the fish market for lunch. The fish market is where local fisherman go to sell their catch. Being that it is very hot here and none of the fish are refrigerated or stored on ice, the fish at the market are very fresh because they don't stay fresh for very long in such conditions. The picture above is people sitting on the benches in front of us enjoying their lunch at the fish market.

Then there was the phone debacle...

I have come to terms with the fact that I am unable to use my iPhone here in Samoa. I'm pretty sure it should function on the Digicel network here, but AT&T employs many incompetent idiots who were too moronic to help me in the weeks leading up to my departure. So yesterday I caved and decided to purchase a pre-paid Digicel phone with refillable minutes. I had already purchased a new SIM card for my iPhone, which turned out not to work. And serendipitously, one of the other Trainees, Blakie, had purchased a phone only to find out that a SIM card worked in the phone she'd brought afterall. So we traded. I was able to text Luisa and Amanda, and I was happy. Blakie, on the other hand, was less happy. The SIM card that I had purchased did not work in her phone for unknown reasons. So long story short, I'll probably have to give Blakie her phone back, eat the cost of the SIM card I purchased, and get a completely new phone. Oh well. I can't believe that very many of you care about the details of this story, but there's a monotony to life here and this was the most exciting part of my day.

We now have a bit of a break. Today is "self-directed," which means we do what we want. Sunday is White Sunday here in Samoa, so between the holiday and the national holiday, nothing gets done on Sunday. The holiday is observed on Monday though, which means nothing is open and we don't have training. Monday has been scheduled as a day of Cultural Exploration, which means we're be taken to the beach. Tuesday we have water safety training, which means we have no more in-classroom training til next Wednesday. Cool.

Obama appears to be kicking ass. Can someone please verify this for me? I'm not quite certain, but the McCain campaign appears to have completely imploded. I hear that the committee in Alaska ruled that Sarah Palin abused her power as governor and that McCain political rallies are getting raucous, so much so that he's had to tone down his own language. Can someone please elaborate on the general political atmosphere in the States? 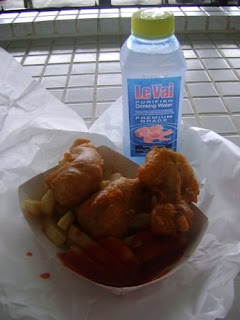 This is my fish and chips from the Fish Market. They were excellent and cost the equivalent of $3Us. 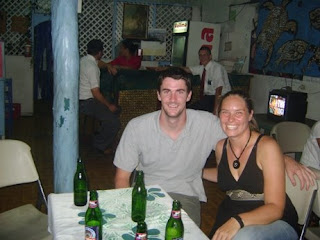 We had pizza for dinner, and right in the middle of texting Luisa, lo and behold, 2 Mormon missionaries entered the pizza place. I was able to discreetly get a picture of the two by having Phil and Laura pose for the picture above.
Posted by Matthew at 9:36 AM

Labels: In the beginning, Training

Ok...this post made me laugh! Thankfully I've never had a lecture about diarrhea...never once. As Katie would say, "Sounds like good times."

As for election news, I was amused to read today that Palin and McCain appear to be at war...with each other. One political analyst noted that Palin has apparently come to the conclusion that the McCain-Palin ticket is going nowhere fast so she is cutting her losses and posturing for a 2012 White House bid. I loved what Betty White said to Craig Ferguson. Did you hear about that interview? Maybe that would be better sent via email!

Can I text you back?

how do you not smell that peppa?? did the diarrhea lady remind you of your seasoned nurse sister??

Sorry I missed your going away celebration...I think our planes crossed over the Pacific when I was ending back from Hawaii.

I did a mission appeal in Hawaii and there were Samoan men at mass in the "skirts"...thought of you.

Fun to read your blog...

I maybe look a little asian in this picture, I thought you were just getting the picture of the missionaries...haha oh well..