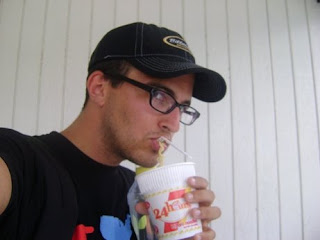 We went snorkeling Tuesday under the guise of having a "water safety training." It was a little silly. We all sat down in a boathouse, and a Swiss man named Urs talked to us about making sure we wore enough sunscreen and other useful tips for staying alive while you snorkel. Urs moved to Samoa from Switzerland 12 years ago. Sick of the rat race, he read a book about Samoa, and moved his whole family. We met his wife and daughter and some kid named James, who we were told several times was not part of the family, but clearly seemed to live with the family. Upon returning to the boathouse after our snorkeling excursion, several other bronzed, blonde, misanthropic-looking teenager/twentysomethings helped pull our boat up to the dock. The whole situation was bizarre, but overall snorkeling was a blast. The breathing apparatus took some getting used to, but I got the hang of it after a while.

They fed us tuna sandwiches on the boat, which I actually took a bite of, reaffirming my dislike of tuna sandwiches. The food situation here is a little strange. We've been living out of a hotel since we arrived a week ago, so mostly we've been eating in restaurants... of which there are not very many. We've gone out for pizza 3 times in the past week. I've also had cup'o'noodles (pictured above) for 3 different meals over the past week. Yes. Subsisting on pizza and Ramen feels as much like college as it sounds.

One place volunteers strongly recommend is a place called Pinati's, which is a short walk from our hotel. As far as dining class goes, I'd say the experience at Pinati's is about 5 or 6 steps down from Chano's in LA or a ghetto taqueria in the Mission in SF. Food is cooked in what essentially is a large garage or a small airplane hangar and served to customers through windows in a concrete brick wall that have pictures of the Sacred Heart of Jesus hanging over them. That said, the food is really tasty, and the place gets really crowded at lunch time. People queue up in what look like Russian bread lines. The place is pretty grotey, but the food is fantastic, and the dining experience is certainly unique.

Wednesday night was a little different, thankfully. A couple of the volunteers invited all interested trainees to go to the Peace Corps office here in Apia to make veggie fajitas. None of us has been inside the Peace Corps office yet, so not only did this provide a healthy option for dinner, but it also meant we could checkout the offices we've been hearing so much about. I finally got to see the Samoan Peace Corps library, which consists of a bunch of wall-mounted bookshelves hastily lined with battered paperbacks. I've been dying to re-read "Life of Pi" and I think I left it at home, but I was able to find it on one of the shelves here. So I'm excited.

Veggie fajitas were interesting. A lot of fruit is grown here on the island, so lots of tropical fruit is relatively cheap here. Vegetables, on the other hand, are hard a lot more expensive. Orange bellpeppers were $18ST per pound (approximately $6USD/pound). Zucchinis were the same. We ended up getting the cheapest veggies we could find, which turned out to be tomatoes, eggplant, and bok choi. They were different fajitas to say the least.

One last thing before I go... the rain has intensified over the last 2 days. Around 2 a.m. Wednesday, my roommates and I were awoken by a violent downpour. Similar, weaker torrential showers passed through on Wednesday. It's very strange how quickly it starts and stops. The sun will be shining, you'll feel a few tingly drops, the clouds will come, it will rain with insane intensity, the rain will lighten and then stop, the clouds will clear, and the sun will be shining again, all within the course of about 20 minutes.

In any case, we are starting to gear up for our big move to the village on Saturday, which I am nervous about. Before then, I would like to figure out the laundry situation and I'd like to get a haircut. We'll see how that goes.

I hope things are well. More pictures below. 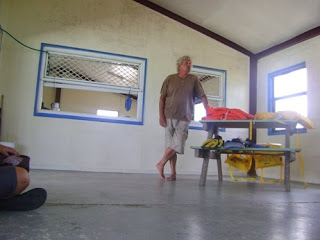 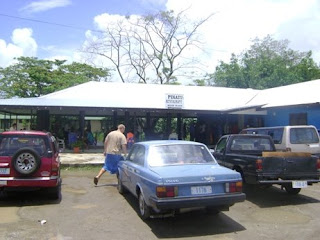 My roommate Dan approaching Pinati's. Pinati means "peanut" in Samoan. You can see the long lines formed at right. 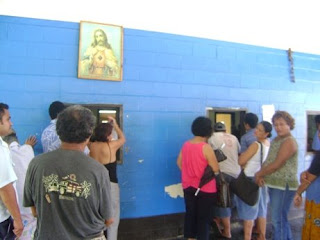 Waiting in line at Pinati's. Notice the appetizing concrete wall and the large, gawdy painting. 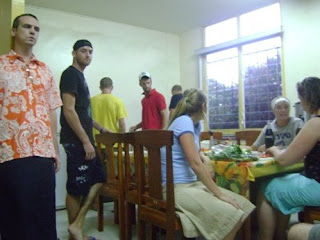 Dinner preparations at the Peace Corps office. From left to right, PCV Aaron (finished at the end of November), PCV Trent (just arrived in June), PCV Jim (same as Trent), PCT Jordan (my group), not sure who the guy is in the far back, PCT Erin (my group), PCV Laura (leaving with Aaron), PCT Blakey. 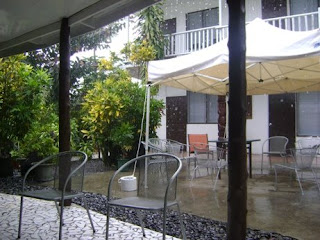 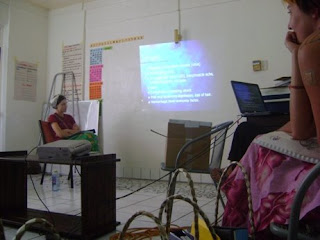 In class on Tuesday hearing about Dengue fever.
Posted by Matthew at 12:21 PM

I was really laughing about 'James.'

"& this is my adopted daughter Margot."

I'm excited for you to go to the village! Which of the trainees you're with are going with you?

bok choi fajitas...sounds really appealing LOL. You can start a whole new trend in fine dining.
Wondering about the breathing apparatus for snorkeling. How different can it be from pinched nose and freaky tube in your mouth?
I know you said the beaches are not that spectacular but the pictures you posted certainly make it look incredibly beautiful, peaceful and serene.
Looking forward to hearing about life in the village and your adventures as you navigate a new life style.
Although I'm surprised to hear that flip flops are a problem since I have a hard time remembering you not wearing them. Shorts and flip flops.That's Matt!
Still not thrilled about the mosquito stories. I itch just thinking about the little blood suckers. :) Deb

I'm with Amanda. I want to go snorkeling! You need those beach shoes that you had when you were little. They'd protect your feet a little from the mosquitos and the coral.