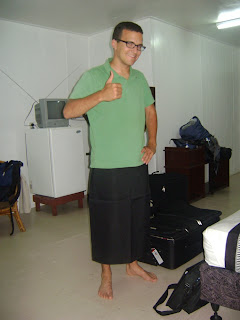 We were greeted by Peace Corps volunteers Laura and Todd, who gave each of us a lei. We then headed into the capital for a looong day. Our lavalavas, traditional Samoan clothing worn by men similar to a sarong, were waiting for us when we got into our hotel rooms. In addition to high fashion, there were lots of intro activities today... Important language phrases, communications and money, opening bank accounts, etc. After a while, it inevitably became information overload. And afterall, we'd all just spent 10 hours on a red eye. So who knows what they were saying. My brain was full.

We also had our 'ava ceremony this morning. As part of the ceremony, each of us individually had to pour out a drop of the 'ava that was handed to us and say, "Lau 'ava lea le atua... Soifua!" Then we were supposed to drink the entire cup of 'ava in one shot. It is also important to note that it is customary for all attendees of the ceremony to sit Indian-style for the duration of the ceremony. This may seem like a simple task, but try sitting Indian-style for 10 minutes and see if your legs don't go numb. So in addition to being exhausted by the airplane and intimidated by being required to memorize lines, we all sat in silence wondering if we were doing permanent damage to our toes. Everything went off without a hitch though, and we all passed some sort of strange initiation.

Our hotel room has air conditioning, which is nice and unexpected. Also, I'm happy to report that my iPhone is pulling in service from one of the local carriers. I should be able to get a SIM card from Digicel sometime soon, and then I will be able to send and receive text messages and phone calls. Also exciting is that there is currently a rates war between Digicel and GoMobile, and both companies have greatly increased their converage areas so now 90% of Samoa gets good service, which means I should even get coverage in rural villages.

Here are some pictures: 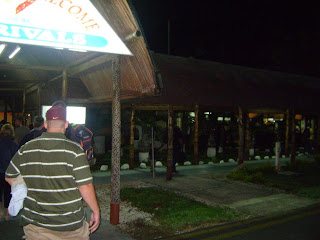 Arriving at the Airport in Samoa under the cover of darkness. No, that's not an Islands Burgers location. That's the Samoan airport. 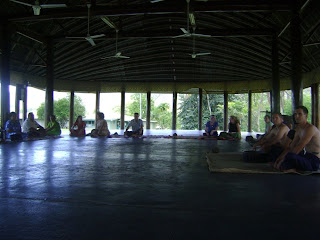 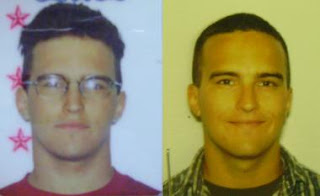 As promised, a back-to-back comparison of my old passport photo (at left) and my new State Department passport (at right). Quite an improvement.
Posted by Matthew at 7:40 PM

I am also diggin' your lavalava. Lookin' good!

The airport looks so cool! Glad you got there safe!

Hey! I like both...nice to think of you when you were younger and great to see you now.