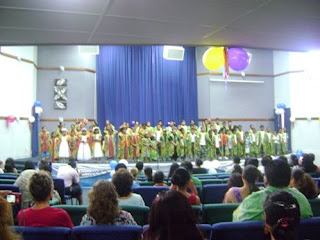 People in my group started to get excited about this weekend since we'd finally be able to break the chains of structured training days. The thing is, when you're in a foreign country that has shut down for the weekend and has extremely hot weather, there's not a whole lot to do during free time. In lots of ways, structured time is a whole lot better because at least you're occupied. At the same time, having some free time did afford me some time to call home.

On Saturday morning, I went with some friends to the internet cafe where I called and talked to my mom and Amanda for about a half hour. Upon returning to the hotel, one of my roommates, Dan, had setup in the courtyard below playing Bob Marley and working on his Will Shortz book of Sudoku. This turned into group Sudoku. Group sudoku eventually evolved into dominoes. Dominoes eventually evolved into Euchre. This was exciting for me. I could pretty much play card games for hours and hours each day for the rest of my life and not get bored. Also, as almost none of you are aware, I occasionally play Euchre on Yahoo! Games. It's actually the only game I play regularly on Yahoo! Games, so it was a nice coincidence that fellow Peace Corps Trainee Joey is kind of a Euchre fanatic. He's a bit cutthroat though, which gets a little intense.

In any case, yesterday was White Sunday here in Samoa, which is a national holiday. By Saturday afternoon, downtown Apia was a ghosttown. We went for a run along the harbour (Ha. Harbour.) on Saturday afternoon, and streets that are normally wall to wall with people and cars were completely empty. It's kind of the equivalent of Market and Powell in San Francisco being completley deserted in broad daylight.

Sunday morning, 12 of the 13 of us headed to church services (pictured above) at the Peace Chapel at Vaimea. I am interested to see what Catholic Mass is like here in Samoa, but we were invited to services at the Peace Chapel by our Peace Corps Medical Officer Teuila. The Peace Corps encourages volunteers to attend church services and even participate in active roles in order to better assimilate into the community.

Since this was White Sunday, the bulk of the service was put on by the children of the community. They told a Marching-On-style story about a toymaker who has a falling out with his toys and then sends his only son to save them. The cheesiness of the story was drowned out by the children's performances, which were cute and funny (both and intentionally and unintentionally). My favorite part was the music.

See, the bulk of the story was the Toymaker introducing each of type of toy (e.g. dolls, teddy bears, toy soldiers) and each group had their own dance. So after the dolls came the clowns. The clowns came out, cart-wheeling and hula-hooping and being goofy, to Barbra Streisand's recording of "Send in the Clowns." When the superhero action figures were introduced, a kid dressed as Superman came running across the stage to Five for Fighting's "Superman." Now don't get me wrong... I love that song. But to see it used in a somewhat inappropriate context in the middle of church in the middle of Samoa was just bizarre. All in all, everyone agreed that church was a great time.

Sunday afternoon was filled with Dan, Supy, Phil and I playing dominoes, euchre, and spades. The four of us have hit it off well. At one point yesterday, Dan asked what was up with all the flies in the courtyard, and I had to hold back a Your Mom joke. When I confessed this, we discussed that we knew each other nearly enough to make Your Mom jokes, but definitely well enough for "That's what she said." This revelation came out in the middle of Dominoes, and we all agreed. Then I said, "Okay. Who's turn was it?" And Dan quickly yelled, "That's what she said!" And it was hilarious.

Dinner was at Hotel Millenia (I had a Hawaiian burger, and they played Cyndi Lauper). And then we played Skip-Bo (which I found to be a terrible, terrible game), BS, and Pasoi Dos (someone please help me spell that).

Monday is scheduled for the beach. I am very nervous about getting sunburned. Between the mosquitoes and the heat, I don't think that I could handle sunburn at this point. And that just about caps off the weekend. More pictures below. 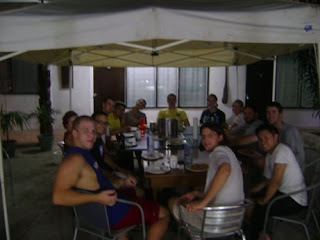 Peace Corps Samoa, Group 81, having dinner in the Courtyard at Apia Central Hotel. I apologize for the blurriness of the picture. Exciting, though, is that this is the first picture I have that has all 13 PCTs from my group pictured. Starting from the right foreground and going around the table clockwise is Dan (roommate #1), Me (with the nerdy John O'Lague smile), Christina (face obstructed), Jordan, Joey, Kate (the vegan), A.J., Blakey, Erin, Gore, Phil, Supy (roommate #2), and Paul. 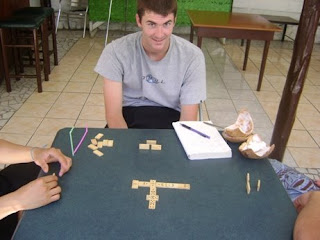 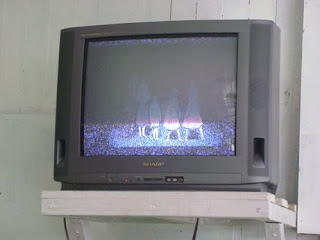 A poor quality picture of The Sound of Music, which was on TV this afternoon. As far as we can tell, Samoan TV shows a ton of American movies. 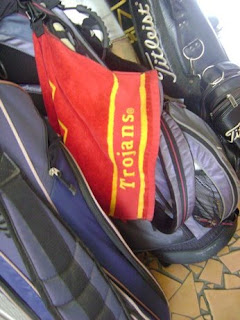 I spotted these golf clubs in the hallway outside the hotel office. Not sure who they belong to, but clearly Trojans are everywhere.
Posted by Matthew at 8:58 PM

When I read your blog I can picture you sitting on the couch telling the stories.
While I was excited about planning to come to Samoa to visit, the idea of mosquitoes could be a deal breaker (at least for me) LOL!!
The whole church story with super heroes, clowns and streisand painted quite a vivid picture.
Looking forward to hearing more.
:) Deb

Yay! I love it! I'm glad things are going well. What's the mosquito bite count up to??

You take that back about Skip-Bo right this instant.