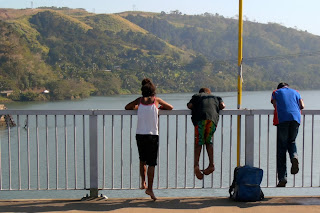 Some might call today a wash. My flight arrived in Fiji at 5:35 a.m. today, and my connecting flight to Samoa isn’t until 8:50 p.m., so I effectively had one waking day to take in Fiji. Consensus from other Peace Corps is Nadi’s not as interesting as Suva, and so I caught a local bus from the airport this morning. As it turns out, a one-way local bus trip from the airport in Nadi to Suva proper takes roughly 4.5 hours. Given the bus didn’t leave until after 7 this morning, and I had to be back to check in for international flight, this left me with enough time to get off the bus in Suva, shop a little, get some Indo-Fijian curry for lunch, and then hop back for the 4.5-hour return trip. Not the most exciting day. On the other hand, the day was enlightening. First of all, what better way to get a taste of a new place than by driving 90 miles through its countryside? I saw a whole lotta Fiji today, granted from an air-conditioned bus. But the bus was travelling at 18 mph, on average. Second, on my return trip back to The States I have another 12-hour layover here, and I’l have companions for that one, so it’s not like I’ll never see Fiji again. Also, now I’m all the wiser, and I’ll be able to say, “Guys, let’s not take the local bus to Suva.” Third, it was a nice way to ease back into the South Pacific. Dan is picking me up at Faleolo tonight, and since lots of people are already in Samoa, tomorrow we’ll hit the ground running. Taking today to re-enter island culture was probably a good thing. Fiji shares many of Samoa’s non-Western tendencies: polychronism, collectivism, conservative traditionalism, etc. It was good to take in a refresher course before jumping into the deep end. Finally, the 9 hours on the bus allowed for some quiet contemplation. Getting off the airplane this morning, I was struck by the salty humid aroma of the South Pacific. They say scent is the most innate for the senses—my two touchstones are the smell of Pirates of the Caribbean at Disneyland and the smell of my grandmother’s lavender bath soap from the 1980s—and my nose spent the morning reminiscing. At first it was just the air. Then the pungent odor of nearby villagers burning their trash. Then the occasional bursts of flowering plants. Each one, even the trash fire, brought on a warm sense of nostalgia. I am struck by how nervous I was to come back and, at the same time, what a thrill it is to be here. I spent a lot of time on the bus today trying to reconcile those thoughts. During training, when I first moved to Samoa, the morning was the hardest part of the day mentally. Waking up, I could feel the weight of the day—the difficulty of getting around, the contradicting urgency and meaninglessness of time, the loneliness of being in a place where I have no social network, no roots. That morning apprehension lessened over time, but it never completely disappeared, and it was fully palpable (but by no means crippling) this morning. And as sad and taxing as that feeling can be, it’s also a thrill. As banal and eventless as today was, it was unmistakably an adventure. And as with any adventure, there’s inherent room for optimism and the thrill of not knowing what comes next. Even if it’s just another hour on the bus. I hope you’re well. Pictures below. 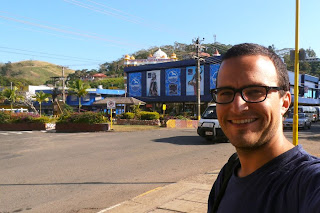 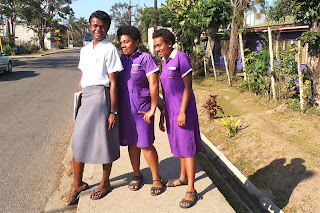 I took a candid picture of some other students this morning during a debacle of a side-trip (I'll tell you about that some other time), and these kids asked me to take their picture. So I obliged. 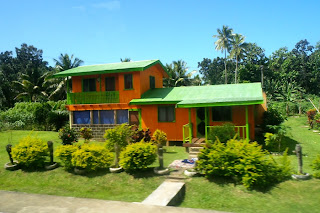 I saw this orange house on the road. I liked it. 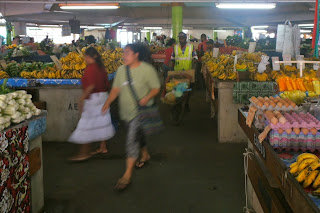 The open-air market in Suva.
Posted by Matthew at 8:00 PM

It's so fun to be reading Matt's Samoa Blog again! You are such a gifted (and funny) writer. I'll be looking forward to your next blog post.

Loved the post. You're a talented writer, dude. Thanks for taking us with you and letting us share your adventure. I spent a week on the main island of Fiji in 2006 (around the time of the coup), and your post brought back a lot of memories! -Hai

Glad to know you made it to Fiji. I loved seeing the pictures.

The hill and tree line in the 'Me in Fiji' photo looks like Hayward. Is that a Mosque behind the Tappoo shopping center? Are you in Hayward? I love the photos, and I like that orange house, too. Have fun. -jl