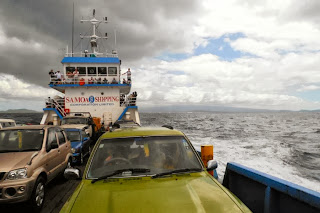 There was a collective hangover this morning, only partially a result of celebrating Jim and Faye’s wedding the night before. Most of us head back to The States Sunday morning, and with the wedding over, conversation has turned to buying souvenirs, summing up the trip, and figuring out what needs to be done between now and 4:00 a.m. Sunday when we leave for the airport. That’s a sobering transition of mindset, and it cast a dour mood across the group this morning.

Things grew worse as the morning went on. The taxi ride was bumpy, the 10 a.m. ferry was canceled, and shopping in Salelologa seemed like more trouble than it may have been worth. And then we returned to the wharf.

While I lived in Samoa, I wrote about the little boat (here). The little boat is an outdated and terrible method of transport, and I imagine it’s only out of frugality and monopoly that the Samoan Shipping Corporation still sees it as a viable option. And that same monopoly is why we had no choice but to get on board.

Morale was already so low that the impending feelings of powerlessness and anger melted away quickly, and all that was left was comic inevitability. We returned to Samoa to remember old times, and we were about to sail into the gritty.

Chris and some others didn’t share my amusement. They hunkered down early and tried to sleep in an effort to anesthetize themselves from the loathsome voyage, but Blakey and I cheerfully accepted the challenge. Fools.

Our entire group started with a rookie mistake: we nestled in along the side of the hull in between some parked cars. So tiny is the little boat that seawater frequently laps up over the sides of the boat, and before long we were all drenched and miserable.

We moved the entire collection of bags several times during the course of the trip, at first to get them away from the splashing of the sea, and then again later when the rain started.

The rain was short-lived and maxed out at a sprinkle; it was nature’s only mercy.

The seas have been unseasonably choppy during our entire trip here. During our stays in Lalomanu and Manase, the ocean has been dappled with whitecaps. AJ was strongly admonished by the Tanua staff for taking a kayak beyond the reef in these conditions. And on the ferry, the listing was relentless.

I pride myself on strong stomach and my ability to withstand seasickness, but going over the ups and downs yesterday was quite the crucible.

Paul, Blakey, and I stood in a circle talking for most of the journey. Paul told a story about the worst ferry ride he experienced while living here. We had to cut him off as our own nausea seeped in.

Blakey pointed out that with many of the other patrons sitting in the tower looking down on us, it might be the biggest audience she’d ever had to watch her throw up. She wondered aloud about the classiest way to conclude that performance. “If it happens, should I take a bow after?”

I quietly mapped out my own evacuation plan. If the need ever arose, I was fully aware of my shortest path to puke over the side. At one point, Chris crawled to the center of our circle, effectively blocking my access to the boat’s edge. I got up and moved.

Eventually we passed Upolu’s outer reef, and the choppiness of the ocean lessened. No one threw up, much to everyone’s relief. Eventually we stepped on to dry land, soggy and sun-drenched, exhausted and still trying to make amends with the lingering nausea.

Even the Savai’i veterans agreed today’s boat ride would rank in their top 5 worst boat rides of all time. Indeed, we sailed from Salelologa, and we arrived in Mulifanua, but most certainly voyaged through hell. 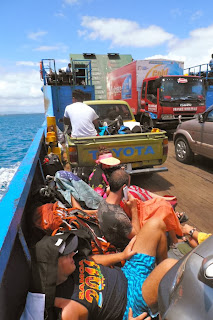 Our camp set up at the beginning of the trip. 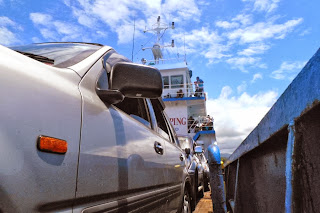 View of the ship's tower from my original position squeezed next to the tire of this truck. 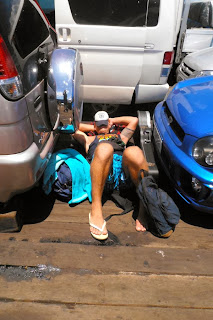 Once the drenching began, Dan moved to this spot, nestled between two cars. 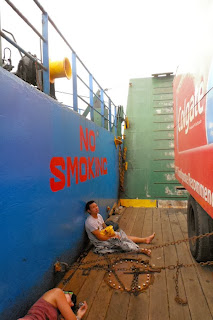 Supy and Chris moved to the boat's bow to try and lessen the splashing and listing. 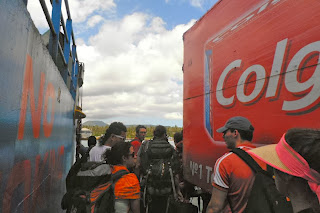 The scene when we finally arrived.
Posted by Matthew at 11:59 PM

Wow. What a great blog. I read all of it. You're a great writer and you provide the mundane daily descriptions that I crave. Everyone knows how to make coconut cream, what I want to know is what it feels like to take the little ferry to Savaii and back. I especially like your cultural explorations.