Back to the Start 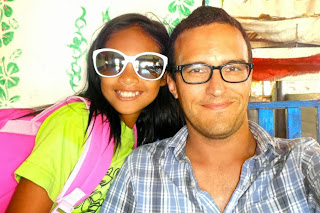 As I walked up my host family’s driveway, I could see men in the fale out back, none of whom I knew; the dog out front looked familiar, and it reacted to my presence in such a way that it knew who I was, but it wasn’t threatened; I was relieved to see the van was in the makeshift carport, meaning that even though I was showing up unannounced the family was home; and as I rounded the van, Akanese was the first face I saw gleefully sprinting toward me calling my Samoan name, “Mati!” Though I’m here for weddings, my biggest indirect priority on the trip was to go back to the training village to see the host family I lived with during the 11 weeks of training in Fall 2008. During my stint in the Peace Corps, I continued to visit them, about once a month on average. Since I lived so close to the capital and didn’t have one cohesive village with which to identify, my training host family filled that niche for me. Heading into this trip, I knew there’d be few firm plans, but I spent the most time mentally planning my trip back to the village. I spent a hefty amount on back-to-school supplies and used the bulk of my luggage space with backpacks and knick-knacks and chocolate for my family. Supy, Blakey, and I rented a car this morning, and after picking up some coke, chips, and pisupo, we headed back to the nu’u. In terms of anxiety, this was probably the pinnacle for the trip. Measuring the time at our permanent sites in years, our neighbors got to know and accept our palagi ways, but the relationship with the training village was different. From a very macro level, it was their job to train us in the ways of Samoa, and in some sense, to program the “American” out of us. They hold us to a higher standard. Whereas most Samoans would smile politely at my mangling of the language, my family still calls me out, “Why is your Samoan so terrible?” Supy wished Blakey and me luck as he got out of the car. And I wished Blakey the same when I did. Those pangs of anxiety didn’t exactly evaporate when Akanese came sprinting out and calling my name, nor when her little sister, the now school-aged Keleme did the same. But the satisfaction I got from seeing those kids and how happy they were to see me eclipsed that anxiety, and I felt foolish for waiting so long to come and see them. My mom and sister greeted me with giddy kisses. They sat me down and chatted me up as Nese and Leme examined the gifts I’d brought. The village took a beating from last December’s cyclone. Mele’s 70th birthday party was a success. The new road going through town is much wider. My sister in America got married. My parents are doing well. Filipo wanted to come, but he couldn’t make it. There was a verbal reconstruction of time timeline of things. Keleme was born in April 2008. I showed up in October. I moved out in December. The tsunami happened. Akanese started school. Keleme was two and a half when I left. She starts school in January. But the real fun came when the adults found things to do, and I got to play schoolyard clapping games with the girls. Popomano (sp?) (at my suggestion), then Chicky-Chicky-Bom-Bom (sp?), then a brief foray into American games when I tried for the millionth time to teach Slide, then finally E Malaki (sp?). Asolima turned on one of the DVDs I brought, and I escaped the pisupo I was served by showing Akanese how to work the pencil sharpener and Keleme how to use the refrigerator magnets. And by then it was time to leave. I regret not seeing them sooner, and depending on the way Saturday works out, I might go back and see them before I leave. When else will I get to play Chicky-Chicky-Bom-Bom? I hope you’re well. Pictures below. 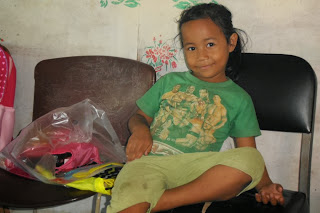 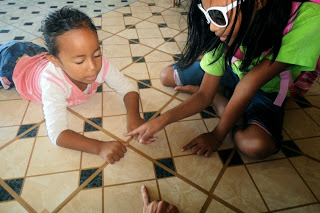 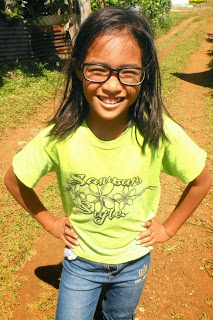 Akanese and I traded glasses briefly. 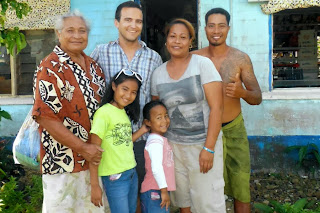 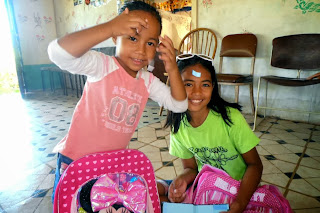 Patty, you were totally right about the decorative PostIts. I stuck one to Keleme's forehead and the kids were off to the races.
Posted by Matthew at 5:47 PM

Akanese is so pretty! Keleme is darling too and soooo big. I'm really happy that you went to see them and I'm happy that my belief that everyone loves post-its was confirmed.

So fun to read your blog and so fun to see the girls (and the rest of your family). They are adorable and obviously your partner in crime, Akanese, was very happy to see you!!