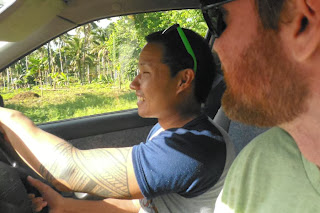 Coming over on the ferry yesterday, we rolled deep: eight members of group 81, one from 80, one from 83, plus large contingents from Paul and Bex’s families. Herding around like this has been our M.O. for lots of this trip, which has been pretty great and pretty overwhelming. On occasion it’s been nice to take smaller, more relaxed excursions. So when Supy borrowed Jim’s car to go Foailuga, Trent and I happily went along. With Supy at the wheel, Trent shotgun, and me in the back, we set off for Foailuga, about an hour west of the wharf along the south side of Savai’i. Top speed is this country is somewhere around 40 mph, so drives like yesterday’s have a leisurely feel. Trent’s blood sugar dipped a little, so we stopped at a faleola for soda, masi popo, and some ice pops. I was only halfway through my ice pop when Supy slowed down the car, looked at Trent and me, and asked, “Should we pick them up? Is that okay with you guys?” I hadn’t noticed the woman with the baby on the side of the road nor her 6(?)-year-old daughter who had waved us down. Trent and I didn’t care, so I scooted out of the middle and the three hitchhikers climbed in. It turned out they weren’t going very far—just one village over—so we mostly drove in silence. The 6(?)-year-old eyed me cautiously. I think the woman was a little surprised to have flagged down a car full of palagis, but she was very gracious. Much of her family was standing out near the street when we arrived at her destination, and we got a couple amused looks. No sooner did she get out of the car then an older gentleman approached Supy’s open window. “My son hurt his arm,” he said in Samoan, non-urgently. “Can you give us a ride to the hospital?” Trent and I were quietly entertained by Supy having to pay the price for his good deed. Meanwhile Supy balked at the man’s question. The main hospital on Savai’i is in Tuasivi, an hour in the opposite direction. But the man reminded Supy of the hospital in Foailalo. “Yeah, okay,” said Supy. So I scooted to the middle, the older gentleman got in on my right, and two teenagers got in my left—the boy with the sling sat on the girl’s lap. This group was a lot chattier. We rolled up the windows and turned on the air conditioning. Trent offered the man the rest of his orange soda, which the man accepted. Ten minutes later we dropped them at the nearly empty hospital. The man offered Supy a 2-tala coin, which Supy declined. He smiled at us and we were on our way. Foailalo is right next to Foialuga (lalo means “down”, luga means “up”), so we headed to Supy’s friend’s place. We stayed about an hour, eventually wandering down to the beach fale resort in Satuiatua. We said our goodbyes and got back on the road. Three minutes into the drive, we passed the old man and his kids walking down the side of the road. Supy pulled over, and they piled back in, the boy and girl sii-ing once more. The man was still holding the now empty soda bottle. The air was thick with nonchalance and the reunion somehow felt inevitable. When we dropped them off, lots of people were still out in front of the house. The amused looks turned to laughter this time. We waved and drove off to join the big group once more. I hope you’re well. Pictures below. 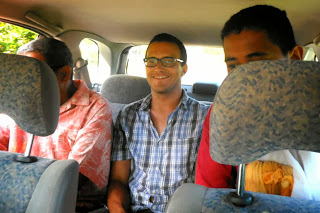 Me in the backseat nestled between fares. 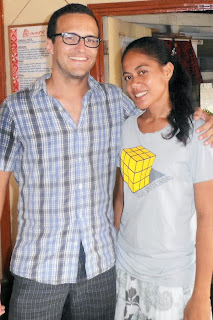 Highlight of the day was running into my old student Lise. I had her in my class both years for year 12 and year 13 computers. I followed Supy and Trent into the beach fales, so I was at the back and I saw her from a distance, and I immediately called, "LISE?!" Her face lit up. It was exciting. 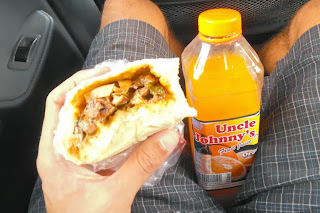 Breakfast of Champions in Apia this morning: Kekepua'a from Lynn's (the best in the country) and Uncle Johnny's Orange Drink, which is essentially offbrand Sunny Delight. 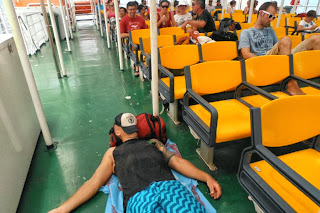 Dan has gone full native, using the ferry ride to nap in the aisle.
Posted by Matthew at 1:30 PM

Super buzzed to see you back in Samoa and blogging about it. No other Peace Cor Samoa blog can match yours. (when it was running anyway!)
Lani Young

Best kekepua'a in the country from Lynn's? I love the ones from Tina's shop @ Vaigaga, so I'll have to try one from Lynn's nxt time I'm there.
A.Pona

you guys are champs for picking ppl up. trust me, they'll be praying for you all.