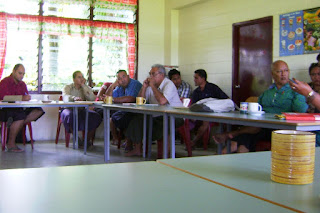 I assumed too much. Students Filifili and Marie from last year’s graduating class wanted school magazines, and I proposed meeting up for lunch, and we’d all agreed to meet at noon today at the fish market. Yes, the school day typically ends at 1:30 p.m., and even by Peace Corps policy I shouldn’t be off school grounds until that point. But given the lackadaisical nature of the last two weeks on which no day have students and staff dispersed after 11:30, I figured making a lunch date for noon would be no problem.

Murphy’s law. I sat down at 11:00 a.m., well after other teachers had gathered in the Staff Room for Interval—I’d been printing colour photos on the vice pule’s machine because hers is the only colour printer in the school that still has ink. We sat and ate buttered masipopo and drank tea for a while before my pule started the meeting.

This has happened before. I’ve gone through the blog archives, and I can’t find any other mention of it, but it’s certainly happened enough times, as soon as the meeting started, in my gut I feared the worst.

There’s no warning. In my text to Phil, I used the word “ambush”. Most staff meetings last 20 minutes, if that. But every once in a while—often on the rare occasion when I have somewhere else to be—a staff meeting will go on for 2+ hours.

At 11:57 a.m., I asked the teacher sitting next to me if she thought the meeting would go on much longer. She laughed in response and said, “Maybe two more minutes.”

It’s true, I should have seen it coming. Prizegiving is next Tuesday, and since there’s probably not going to be school on Friday, there’s a lot of logistics to work out between now and then. In addition to forming committees and working out what teachers will wear and who is in charge of what, there’s also the rather obvious issue of what students should be awarded which prize.

It was sophomore year of high school when I first heard the quotation, “The worst part of democracy is that everyone gets a voice.” We sat there as a staff this morning, collectively mulling over which students should receive awards like “Best Sportswoman,” “Most Reliable”, and “Best All-Rounder”.

Note: When I made the label for the Best All-Rounder trophy, I typed out Best All Around. Both the Samoans and the Indian Missionaries thought this was hilarious. What a fool I was. Clearly the award should be titled Best All-Rounder. Whatever that is.

There were long discussions with debates that went on and on. For Most Reliable, there was a tie in the voting, so arguments had to continue.

During all of this, I’m receiving text messages from Marie and Filifili wondering where I am. At one point I feigned receiving a phone call as an excuse to leave the room to go pack up my laptop so I could get the hell off campus once the meeting finally ended.

I finally ended up leaving at 12:45 p.m., nearly 2 hours after the meeting started, and 45 minutes after I was supposed to meet up with my lunch party.

But at least we’ve all had input on who should be awarded Best All-Rounder. 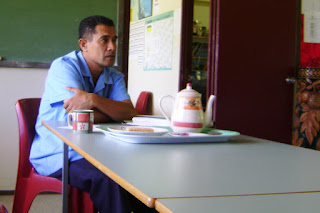 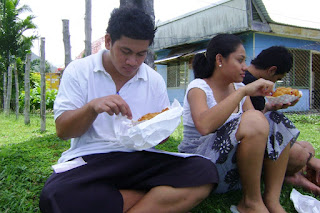 Filifili, Marie, and Marie's friend (he told me his name, but it escapes me now). 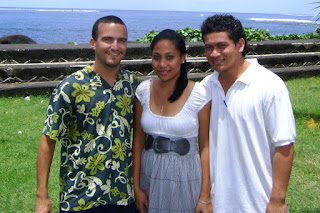 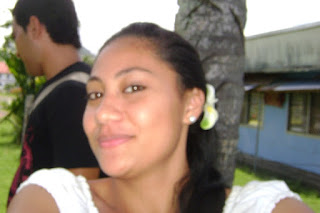 I too never understood All-Rounder. However, when I typed up the prizegiving programs I put in All Around. The school secretary asked me about and I told her that is the correct way in English and no one every questioned it again. So at Wesley College they were Best All Around for two years. I am sure they are back to All-Rounders now.