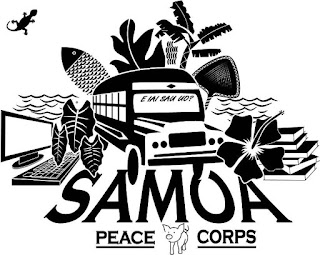 I had nothing to do today. It was hot when I woke up this morning, and so I figured I’d spend a couple hours in the Peace Corps office, hanging out with whomever was around, soaking in the air conditioning. Dan wanted me to bring my Skype headset, so I loaded up my backpack and headed over. Though I needed phone credit, I walked past K.K. Mart on the corner and headed directly for the office door. I hadn’t sat down for more than 5 minutes when Jenny 82 approached.

“Hey Matt,” she said. “Want to work on the Peace Corps t-shirt?” I knew what she was talking about immediately.

A while back some Peace Corps Volunteers in Samoa created a non-profit organization to make it easier for volunteers to perform collective community service projects and such and apply for grant money that might not be available to the Peace Corps itself. This group, Avanoa Tutusa, is typically headed by a volunteer (currently Joey 81).

Avanoa Tutusa’s latest fundraising project is making Peace Corps t-shirts and selling them to current volunteers. Jenny 82 drew the initial design a month or two ago, and since then the project has been in development hell. There were issues with finding a good place to get t-shirts made, and Jenny’s design went through several iterations.

So when Jenny asked this morning if I could help with the t-shirt design, I think she mostly wanted me to scan the image and move around a couple of the implements on the page.

But I, in my vector-based mindset, decided it would be best to re-draw the entire design on the computer. Chris (who had been working on getting a t-shirt vendor in The States) had toyed with the idea of creating a vector-based image of the logo, and that got me excited, and so when Jenny 82 casually asked this morning, I made a beeline for the computer.

I started work at approximately 9:30 this morning. I worked diligently for roughly 5 hours to re-create Jenny’s design. Jenny, who attended art school at one point, had big ideas for the t-shirt design that she had forfeited months back for whatever reason. But with my newfound zeal, my recreation of the design provided an opportunity to include a lot more stuff that had been cut.

This morning, the design included a bus with a breadfruit leaf, a banana tree, taro leaves, and a hibiscus flower. By late afternoon there was a fish, a fan, a lizard, and a pig. Then a computer (preferably drawn in dramatic perspective) and a stack of books were added in the early evening.

There was a lot of discussion about the angle of the bus and whether it looked like it was actually coming toward the viewer. It was worked and re-worked several times over.

And I didn’t mind. I had nothing to do today.

I hope you're well. Leftover bald pictures from last week below. 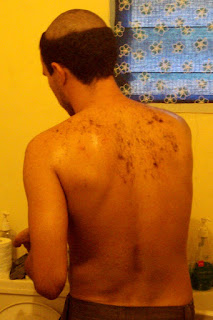 Me after the initial haircut. 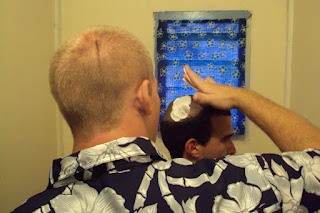 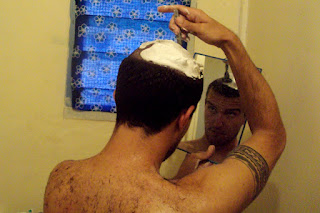 Me with the Bic. 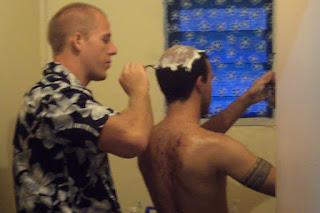 Dan helped with the Bic. 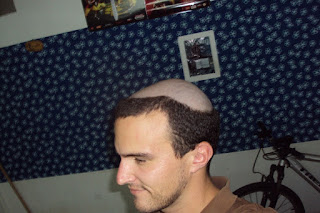 The final product.
Posted by Matthew at 10:59 PM

You guys should take orders from pcvs friends and families. That's a great design.

Hey, even RPCV's parents would order some of those....it is a great design! I definitely would get a few for Sara and Cale!