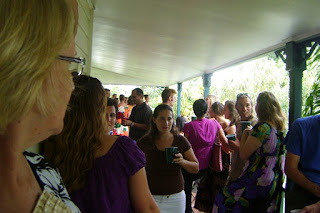 Wednesday marked the third year in a row I missed my family’s annual Martha Stewart viewing. The night before Thanksgiving every year, we invite friends over to watch the same Martha Stewart Thanksgiving Special, circa 1987. For most major holidays our family would go to someone else’s house to celebrate, but we always hosted Thanksgiving, so it’s always strange to spend the holiday without home-field advantage. But I must admit, part of the benefit of staying in Samoa for my school’s Prizegiving was it meant I’d get to spend one last Thanksgiving with the Peace Corps.

As I’ve said a thousand times before on the blog, we go all out for American holidays here—Thanksgiving, Halloween, and the Fourth of July tend to be big, jolly affairs. And yesterday was no exception.

Our monthly stipend provides more than enough for food, and certainly none of us is hungry, but it’s still a rare occasion to have a large American-style meal served. Sitting with a bunch of trainees from group 83 who are still used to either American-sized portions or the luxury of training itself, many of them filled their plates with small, sparse piles of mashed potatoes and turkey. You eat like a bird, group 83.

At the other end of the spectrum were those of us who’ve been out in the cold for 2+ years. Looking around at the other picnic tables, I saw a bunch of group 81s gorging themselves on plates of food piled to the point of absurdity.

After last year’s failed garlic mashed potatoes, I went in on a bowl of Poor Man’s Macaroni and Cheese—i.e. macaroni shells with parmesan cheese—with garlic-infused olive oil. It was not the most appetizing side dish on the table, but it at least it was served this year.

There was college football on TV, but few volunteers sat inside to watch. After dessert was served a bunch of us threw on our trunks or two-pieces and took a dip in the pool. A rather intense game of Three Flies Up ensued—the kind that ends in tears and broken fingers. It was a good time though. At one point I decided I was done and began to climb out of the pool, only to have my third fly land directly in my arms. It was cool.

The rest of us sat around chewing the fat until it was time to go.

Yeah. Third Thanksgiving is in the books. Bring on the Christmas music. 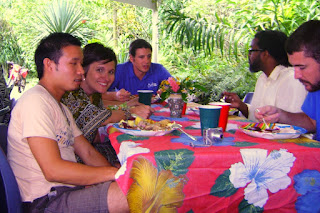 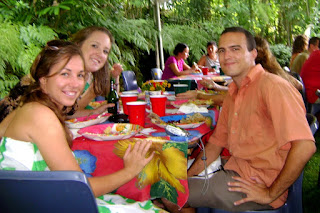 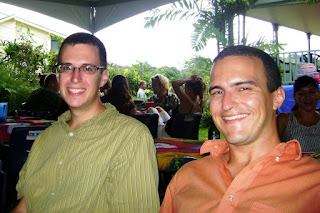 Kyle and me. Kyle went to Notre Dame. Congratulations, Kyle. 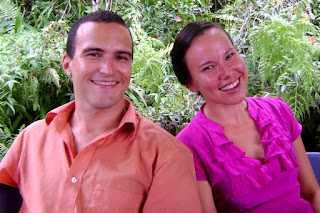 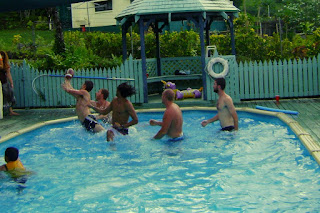 Joey and Mika dive for one of my Three Flies passes.

What am I thankful for? That you posted a picture of my daughter!!! After 6 weeks, I needed to see that, thank you!!!!