Tea for the Tillerman 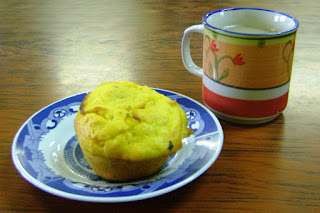 In addition to our principal, there are 4 staff members leaving at the end of this school year. The head of the Commerce department prematurely resigned his position when he received a verbal job offer from the Ministry of Education that didn’t pan out, one of the Samoan teachers received a scholarship to attend a Masters program at the National University of Samoa, I am returning to The States, and Suasami—the English teacher I sit next to at Interval most days—is retiring. The Commerce HOD has stopped showing up to school, and the Samoan teacher isn’t really leaving per se, so Suasami and I are in a club of our own. And today we bought tea.

As I’ve said many times before on the blog, most schools don’t have tea. If teachers want to drink tea at Interval, they have to buy it. And most schools certainly don’t offer a small pastry with daily tea. But my school, with all of its functional money management, is able to offer staff members a cup of tea and a panepopo or a scone or a muffin for just about every day of school. But now that we’ve essentially reached the end of the school year, and the tea committee has set off for India, daily tea has become less of a guarantee. So Suasami and I stepped up to the plate—errr—the saucer.

Celebrating your own special occasion by buying stuff for others is how things are done in Samoa. When Apong’s son was born he bought lunch for the staff. When the secretary got married she bought lunch for the staff. For my friend Dev’s birthday a few weeks back he bought rounds of drinks at the bar. And it was somewhat obligatory that Suasami and I would buy tea in observance of our own leaving.

Had I been going it alone, I would have bought Pinati’s for the staff. Pinati’s is sort of like Samoan Taqueria food; i.e. voluminous and cheap. But it still works out to between $3 and $4 per person, and Suasami thought that too expensive. She suggested we get cinnamon bread from some bakery she likes in Mata’utu, panekeke from the same place (deep-fried balls of dough somewhat similar to doughnut holes), and Sky Flakes crackers.

As the non-Samoan half of the duo, I decided to stay out of the decision-making process. Whatever she thought best was cool with me.

We went to the bakery this morning. “We have to wait until nine o’clock,” she told me when I arrived on campus. As it turns out, the bakery needed a couple hours to come up with 80 balls of panekeke. In fact, they needed until ten o’clock.

But we rolled in an hour early, so we killed time browsing the shop next door. Have you ever been really bored so your mind fixates on things to read even though they’re not particularly interesting? I read the warning label on the packaging for a bath mat, and I think Suasami was ready to buy it for me. I had to talk her down.

In the end, the bakery worked out just fine, and we got back to school with lots of time to spare. Once tea was served, art teacher Kolenio did the traditional Samoan announcement that is said when someone provides a meal. Ears perked up when my name was called out, and many staff members came to thank me and shake my hand once the meal was over. 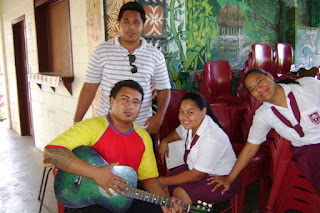 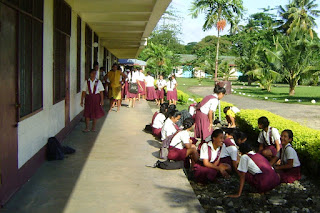 Today was a cleaning day on campus. 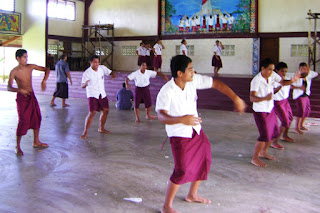 Dance practice was held after school as everyone gets ready for next Tuesday's Prizegiving. 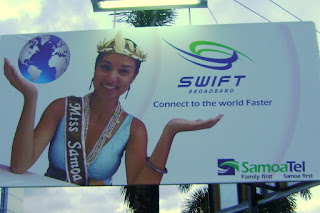 This billboard went up near my house a couple weeks ago. Tonight I realized Miss Samoa's sash is written in Monotype Corsiva.
Posted by Matthew at 11:00 PM

Paying very close attention to that sash there Matt! ahem...