Talking to No One 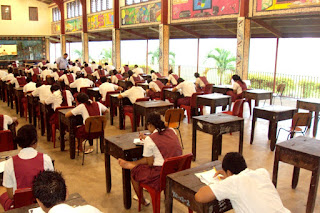 There was one day when Ms. Yarbrough went berserk. Back in 7th grade English and Social Science, it was the last period of the day, and we were reading some textbook aloud as a class, and out of nowhere, she snorted. She laughed and flailed her arms and talked to imaginary people on either side of her. She leaned back in her chair and let out bursts of blithe incomprehensible gibberish. When she came to, she told us it was all an attempt to show us what our behavior looked like from her perspective. And now, 15 years after the fact, I finally understand.

I’ve heard a bunch of reports on NPR about how the human brain isn’t fully formed through most of the teenage years and how this can at least partially account for why teens act as though they aren’t in control of their bodies. And watching them day in and day out, I can believe it.

Trying to keep 9.3 under control yesterday, I warned them that the next person I saw talking would have his or her test taken away and that person would receive a zero. This worked for about 30 seconds, and then one boy across the room from where I stood turned and yelled something at the kid behind and to his right. As soon as the words had left his lips, he got this stunned expression on his face and snapped his head toward me. The look was less contrite and more bewildered, as if to say, “What was that?!”

The talking to imaginary people is a real thing as well. My 8th grade teacher Ms. Barton used to make fun of us. She observed that at certain moments, everyone in the class was talking to each other at the same time, and absolutely no one was listening. She looked out and saw not 15 different conversations, but rather a cacophony of 30 separate impromptu soliloquies being performed for 30 different imaginary audiences. Everyone is talking, no one is listening. “No one is listening to you!” Ms. Barton would mock. “You’re talking to the world, but no one can hear you because they’re busy talking to you.” I’ve seen it over and over this year, particularly with my year 9s (who would be 8th graders in America). It would be funnier if it wasn’t so obnoxious.

And it’s amazing how the kids grow out of it. Collecting the exams once the testing period was over yesterday was chaotic. I told the kids to quietly raise their hands if they were finished, and I would come around and collect everyone’s paper. The result: 46 kids babbling to no clear listener.

But when the same system is used with the year 11s, who take exams as one collective group of ~150 students in the assembly hall, they’re impressively patient and orderly about the whole thing. Certainly the acoustic reverb in the classroom makes things worse, but there’s still much to be said for how much more self-control the year 11s have in comparison to the year 9s. 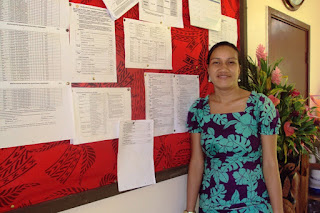 My school's secretary, Fa'alau, asked me to take this picture of her next to the bulletin board.

I bet if I forwarded this blog entry to all 8th grade teachers out there, how many would nod their heads in recognition to your observations.