Getting with the Program 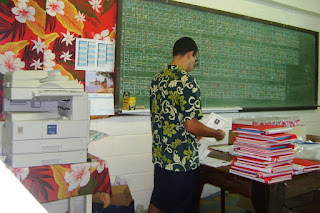 Though Prizegiving is tomorrow, I was expecting today to be high on the ceremonial side. There are a bunch of teachers leaving, and the year is drawing to a close, and it only seemed appropriate for there to be some intimate acknowledgments of the bonds we’ve formed as a staff and as a school and while tomorrow is a large celebration with pomp and circumstance and family and friends, I imagined today might be a day for some calm before the storm.

But today was all business. The moment I arrived at school the secretary handed me the agenda for tomorrow’s program and asked that I turn it into a booklet handout. I had last year’s design saved, and I substituted some of the graphics with a bunch of vector-based graphics I built for the Peace Corps t-shirt, and by the time morning assembly was over—mark the time, 10:00 a.m.—I had a draft ready for my pule’s approval. I handed him the design as he walked out of the Great Hall. He nodded emphatically, said, “This is very nice!”, and then walked away without waiting for feedback.

I went over it again with the school secretary, who had some changes of her own. She wanted to put the starting time for tomorrow’s event at the top of the agenda, “8:30 – Taimi Amata”. I smiled and nodded and ignored her suggestion.

We’ve been having a talent competition of sorts at my school over the past few weeks, and though the entire agenda was written in Samoan, the talent events were written in English: Soloist Finals, Duet Finals, and “Agapela Champs 2010”. That last one seemed a little ridiculous to me, so I changed the invented Agapela to the traditional Italian-borrowed “A Cappella”. This caused a brief controversy among staff, as many thought I had no idea what I was talking about.

Once we finally started making copies of the program, my Vice Pule asked, “Did you fix fa’aisuaso?” Apparently the word should have been Fa’aiuaso, translation unclear at press time, but no one had told me this until the copy machine had started. I quickly hit cancel and fixed the mistake.

As the day wore on, I made 360 double-sided copies for tomorrow’s program, and after the secretary got sidetracked, I ended up folding about 250 copies of the program in half. The entire project took about 4 hours, and I was all too happy to get out of school this afternoon.

Once I was got out of school I went to the Peace Corps office, picked up the brand new Peace Corps t-shirts, headed to Italianos for dinner, and then went to the airport to see Dan and Jordan off.

I got back to my house around 1:15 a.m., only to be greeted by my pule who emerged from the campus’s shadows. “Can you come early tomorrow morning? The programs are wrong. We need to re-print them,” he told me.

Even though I’d received his cursory approval, the thumbs-up from the school secretary, and my vice pule’s (late) blessing, my principal wants me at school at 5:30 a.m. to redo the program. How fun. 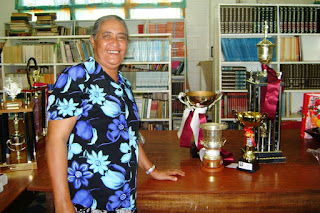 In order to make a big show of the Dux award (in America we'd call this the Valedictorian), my school gives the winning student 4 different trophies, all of which must be returned next year so they can be awarded again. In order to document the 4 trophies, the Prizegiving Committee asked me to take a photo of them today. I suggested Ms. Peteru be in the photo. She happily agreed. 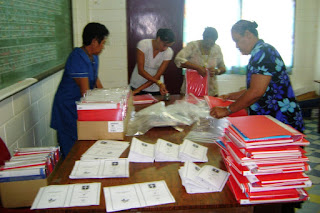 My folded programs in the foreground. All of which must be discarded. 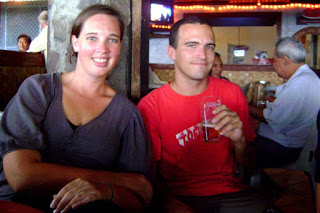 Blakey and me out for Dan and Jordan's going away this evening.
Posted by Matthew at 11:59 PM

You haven't ventured far from your tasks at the diocese.

Fun times! That is a super cute picture of you and Blakey once again!

Fa'ai'uaso - literally: end of the day.in this instance it would mean: conclusion of ceremony.
Have a safe trip home Matt. Its been a priviledge to read about your experiences in Samoa. Thankyou for sharing your life these past two years.
It was great meeting you & Blakey earlier this year :-)
Wishing you all the best
Grace.