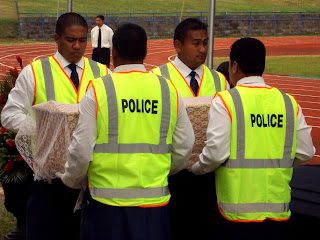 The National Memorial Service for Tsunami Victims was held yesterday, and though it was much larger in scale—the diplomatic corps attended, there were 11 caskets, the Prime Minister spoke, the event was nationally televised—it still followed the same general structure of a Samoan funeral. There was grieving and a sense of loss and lots of singing, and at the end, there were Styrofoam boxes of food for the entire crowd.

It wasn’t the first time I’ve been to a Samoan funeral. Back in August I went to visit the host family in Fausaga, and we whisked down the road to a funeral in neighboring Vaie’e. I was underdressed, and Asolima and I spent most of the time in the car, but when it came time, we sat outside the family’s fale and watched the presentation of money and fine mats and corned beef.

In training, the Samoan concept of Fa’alavelave was translated to us as “big trouble,” but that translation doesn’t quite capture the essence. My Samoan dictionary defines it as “Anything that interferes with normal life and calls for special activity.” This explains why both weddings and funerals constitute fa’alavelave. The dictionary goes on, “A wide range of events, ranging from a wedding to a canoe lost at sea is covered by this concept.”

Most often, a fa’alavelave consists of giving money to the family affected. Depending on a person’s relationship to the family, people are assigned the amounts they must give. For example, when Asolima’s cousin died last month, her mother Mele was assigned to give $40, 2 fine mats, and 1 case of corned beef. Asolima and her two children were assigned the same, but as a group.

With the immense destruction and loss of life caused by the tsunami, individual fa’alavelaves might break the bank. I haven’t heard too much about anyone being required to pay a certain amount, but I don’t doubt it’s happening.

As for the event yesterday, leaders representing the three main churches of Samoa—the Methodists, the Congregationalists, and the Catholics—gave prayers, and the Prime Minister spoke. Student leaders representing schools across the country laid wreaths as the names of the deceased were read. Many students cried.

There was a gorgeous sunset as crowds gathered at the site of the mass grave. Caskets were lowered and the crowd sang a traditional funeral song. I really liked the song, but I can’t recall any of the words beyond the last line, which was “Tōfā, tōfā, tōfā”, or “Goodbye, goodbye, goodbye.”

After the service, people crowded down into the grave to cover the caskets in flowers and baskets and packages. In Samoa, death is not viewed with the same macabre weariness that we feel in America; many many people have graves in their front yards. Sometimes these graves are decorated elaborately, and sometimes they’re just large slabs of cement where people lounge in the afternoon.

In any case, yesterday’s event seemed to me to hit the right note.

I hope you’re well. Pictures of yesterday's ceremony below. 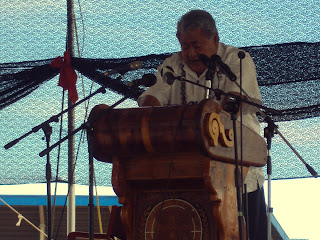 The Prime Minister giving his thoughts. 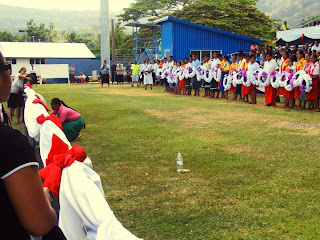 Students line up to lay down their wreaths. 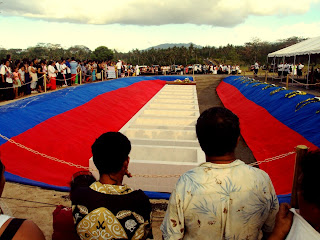 The spot in which the deceased were laid to rest. 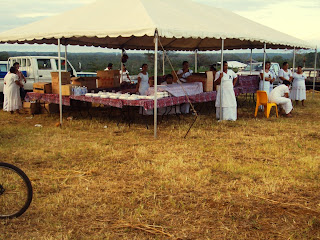 There a six verses but mostly you would only ever sing the first two verses and this song can be found in the EFKS hymn book.
The basic translation of the song is, Woe to me, my brother you have passed on, your work here is done and now you may rest because your Matai(God)has called you.Goodbye.Goodbye.Goodbye.
Thanks for writing this past year - looking forward to the next 365 entries.
I'm another "Off Island" kid living vicarously through you :)

...my grandmother died in August in Vaie'e I wonder if this was the funeral you attended....what a small world it is when it comes to Samoans!! Congrats on your one year anniversary....keep up the great work

I opened the Argus this morning and there you were on the front page of the local section. Reporter used your blog picture with Akanese and the head line reads: Logan grad aids Samoan quake survivors. The article posts the link to your blog and the efforts of the Polynesian Club at school to collect needed clothing and food for tsunami victims. Here is the link to the article: http://www.insidebayarea.com/unioncity/ci_13528665
Stay safe. You are thought of often.

I just read your article in the Argus. You're all over the place! You're famous. I'm gonna brag about you all the time! I miss you. I love you. Love, Annie

P.S. Thanks for making me feel better about my accident.

Talofa from Europe,
Thank you for your awesome blog which us 'islanders' from afar are thankful to be accessing. Malo lava for the wonderful work you've done in the last year, and may you have a more positively, safer and adventurous year ahead.
Love your writing!! I now look forward to reading your blog first before the Observer online!!
Faafetai, ma ia manuia.