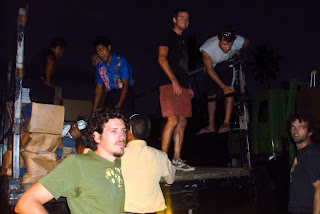 For reasons I won’t get into, I was wary about leaving my house for hours and hours to go unload an airplane yesterday, but Supy cajoled me into going. Briony walked around the Peace Corps office during fiafa prep on Friday recruiting volunteers to go and help with moving boxes of American tsunami donations from a cargo plane on to trucks to transport to the distribution center in Apia. In the end, we amassed 14 volunteers and headed out to the airport in a taxi van.

The event coordinated by a bunch of organizations including the American embassy, Malua Theological College (college?), and USAid. The plane was originally scheduled to land around midday, but it was delayed and instead got in around 4:30 p.m. The Samoan press was there to cover the event, and while Peace Corps showed up in beat-up, nasty clothes (as usual), many of the other workers wore pulatasis and dress shirts. We seemed underdressed at the photo op, but it worked out later when we were moving boxes.

As it turned out, the plane was carrying 90,000 pounds of donations that needed to be loaded onto 15 trucks. Upon hearing this news, Trent looked around at the rest of us and said, “No sweat. We should be done in 20 minutes, right?”

Since the event had been planned around the plane’s original arrival time, the US Embassy had agreed to provide dinner for all volunteers. With the arrival delay, this became awkward. We loaded up one truck, and then we were told to go eat. And then while we were eating, it was decided a different truck should have been loaded. We sat and ate hot dogs while a bunch of Samoans unloaded our truck and packed it all on another. The image was less than ideal.

Luckily, when there’s 90,000 pounds of stuff to move, there’s time to make up for mistakes. The airport crew loaded boxes and boxes onto large, hydraulic dollies which were driven over to our station where we unloaded the dollies. After the initial confusion gave way to more honed efficiency, we had a good system going. Most communication was in Samoan. My favorite part was yelling “Oh!” when the dolly needed to stop.

I’ve never been much into the upper-body workout, and my arms went through an initial state of shock, but I could still hang. After 3 hours of heavy-lifting, I was still able to toss 25-pound bags of rice to the guys on the truck. It’s a small feat, true, but impressive for my stick-like arms.

I think we all felt good about ourselves, actually. The Information Technology volunteers rarely see manual labor, and our air-conditioned computer labs start to feel like ivory towers, which is very un-Peace-Corps. Even volunteering for the Red Cross after the tsunami, there was little for volunteers to do at times.

But toward the end of the night when the last load came off the plane, there was a sense of hard work and accomplishment. We smelled gross and we were all sweaty and our arms were sore. Dan said, “This is what I imagined the Peace Corps would be like.” 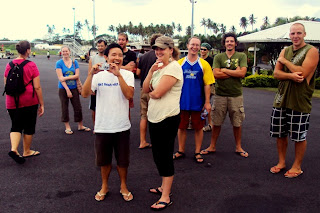 The gang at the airport. 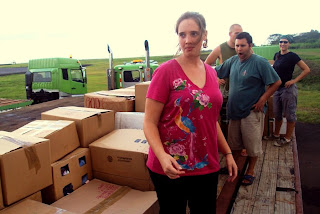 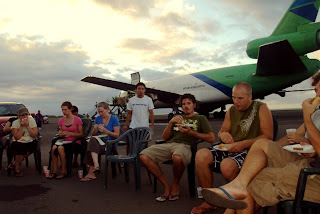 Dinner on the runway in the shadow of the plane. 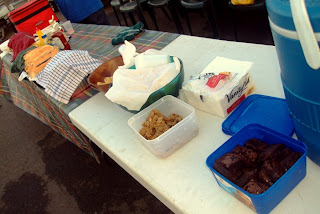 The dinner spread. Yeah. There were brownies. 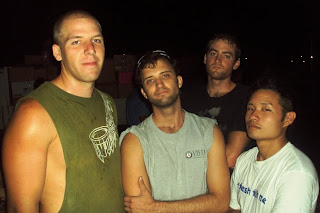 The bad-ass close-out crew. Dan, Ben, Trent, and Supy (and me behind the camera).

Labels: Earthquake, Out and About, Volunteers en Masse

That's a nice way to finish the day with some physical work for charity.

And did you get culturally explored with a little B&E recently hence the reluctance to leave the house. It happens to everyone in their lifetime in Samoa, somtimes even more than once. The trick is simplify..