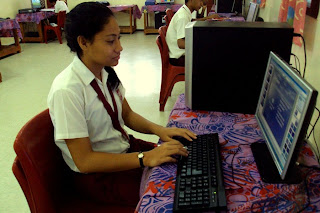 My year 12s and 13s are constantly late to class. I had a double-period with my year 12s on Wednesday, and only 4 showed up for the first period. And today was no exception for my year 13 class. I turned on all of their computers, and then sat playing Freecell for 9 minutes. And then Marie sauntered through the door and asked where the rest of our class was. Good question, Marie. She went to look for them while I put the jack of spades on the queen of hearts.

She came back and said the rest of the class had gone to a marketing event at the National University of Samoa. Two weeks before the Pacific Senior Secondary Certificate exam and I have two hours with my kids, and they schedule a field trip. Boo. I looked at Marie, “What do you want to do?” She smirked and walked to the computer at the end of the room.

The computer at the end of the room is popular in all my classes because it has loads and loads of music. I’ve tried repeatedly to purge my classroom of the stuff. Ethical Issues is a unit in the year 13 curriculum, and we talk about piracy and intellectual property. But beyond the moral and legal issues involved, the most annoying thing about having music on the computers in the lab is there are no headphones and one computer playing DJ OK is annoying enough, let alone two or three or five.

One day I went in and cleared all of the music off all the computers in there, and I watched carefully as my year 12s discovered the Grinch had stolen their Christmas. But just like Whoville, they didn’t bat an eye, and they’d already uploaded quite a bit of music from their rogue flash drives by the time the bell rang at the end of the period.

In any case, Marie, who normally sits in the middle of the room, seized the opportunity to acquire new music on her flash drive. Right now I’ve regulated the music selection so there is only remixed music from Samoan DJs and a couple of Samoan artist tracks. Yes, I realize intellectual property exists in Samoa too, but artists here tend to make music readily available to the masses.

It was my last class of the day, and when I finished shutting off the other computers, I walked over to Marie’s computer to watch.

Samoa has clearly defined musical tastes, and it’s amusing to see what American music is popular here. Beyoncé and Akon are huge. On her flash drive, Marie also has mp3s from Rhianna and Lil’ Wayne and Jordan Sparks and Five for Fighting. Yeah, I said it. Five for Fighting.

I sit down next to her and I scan the flash drive for viruses (there are 7). Then I check the capacity. She has 13 MB remaining. So I recommend we cut some stuff. She runs down the list with a skeptical eye. She nixes Mariah Carey. And Kelly Clarkson. And Chris Brown. I think I probably save the Green Day by getting excited and playing “21 Guns”.

She takes some Savage off the computer. And some Vaniah Toloa. And a couple of DJ OK remixes.

The period passes and we talk about music and Samoa and family, and then the bell rings and she leaves.

I saved you, Green Day. If nothing else, I've kept pop punk alive in Samoa.

I hope you’re well. Pictures will be posted later this evening. 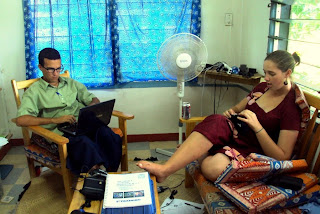 Me and Blakey deconstructing the day at my house. 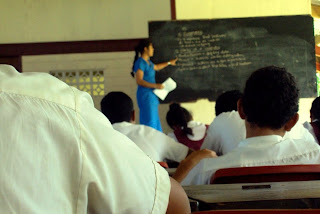 Student teacher is hanging in there.
Posted by Matthew at 7:00 PM

Cool that you saved Greenday. Nice to have variety. Hopefully, they are also saving their work onto the flashdrives.