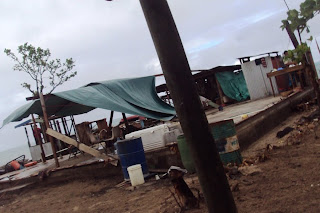 On the chalkboard at our staff meeting this morning, my pule wrote “Schedule for the Week (FAST WEEK)”. I hadn’t been informed of any days off school this week, so I assumed this had to do with cramming for upcoming exams. Perhaps this was some sort of “lightning round” method of test prep? As it turned out, this week has been set aside for ritual fast. Sitting next to the vice pule at Interval, I asked why people were fasting and she answered, “To avoid another tsunami.”

With the earthquake and tsunami about 3 weeks behind us, it was nice to come together with volunteers this weekend to hash things out and debrief in a less urgent setting. More than one volunteer reported being encouraged to pray very hard in order to avoid a tsunami today, 19 October. There are still 4 hours left in the day, but it seems like Samoa’s going to make it through the day unscathed.

Most unscathed, I guess. There was a 6.2-magnitude quake this morning around 11:45. It was extremely short; perhaps it lasted 2 seconds. Despite its brevity, half of my 11.1 class sprinted out the door to evacuate within 5 seconds. More than anything it was disruptive. I had to usher my kids back into the classroom and hop right back into Microsoft Excel review.

The Peace Corps sent out a text message shortly thereafter saying no tsunami advisory was in effect.

I have no problem with this national mood, and I think it’s probably for the best that people show more concern about tsunami preparedness. There was a national tsunami drill last November. Group 81 was in training at the time, and our participation consisted of walking up the road to the maumaga. Short and sweet. There was little participation among the host village. The explanation from someone’s host family, “God will save us.”

Even the morning of The Big One, students acted as if nothing happened. So it’s good that there’s a stronger cause-and-effect relationship between earthquakes and tsunamis now. That said, it’s a little discomforting that the focus is more on pray-and-fast than duck-and-cover.

Before I jumped back into Excel, I talked to my 11.1 class about how rather than clamoring out the door, it probably would have been better for them to simply climb under their desks. A couple of them nodded sheepishly.

I figure I’m in no place to make judgments about fasting and prayer (incidentally, we supposed to really focus our fasting on Wednesday and Friday between midnight and noon), but I understand the physics of falling debris. God works in mysterious ways, and I like to think one of those is the structural integrity of school desks.

During a trip to Lalomanu last week with school staff, we saw a lot of families living in tent structures like this one. 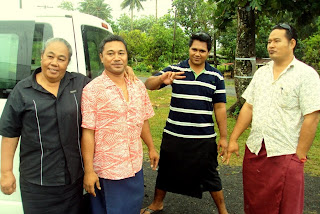 Teachers from my school outside the house in Lalomanu.  We went to deliver students' donations to students' families who were affected. 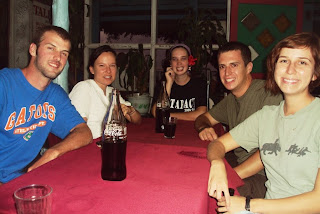 What is up with the 19th? I've received about 10 or so texts from the past week, from my Samoan family asking me to 'go surfin on da internet' to see if something happened on the 19th- they were very concerned! I couldn't figure out what was going on- urban legend? Massive superstition? Where did this originate?

remember the "duck and cover" earthquake drills at elementary school? were we the only district that did that? my kids haven't done that. hmmm....