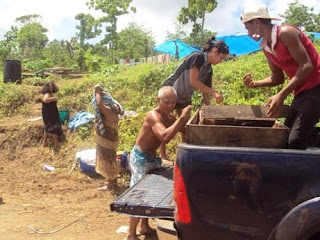 We only made one trip out to the south side of the island today because the truck was needed in Apia to bring bottled water to a helicopter that was bringing larger quantities of water and supplies. Our time in Lalomanu was quite brief—3 minutes, perhaps—and then we got back in the car to make the hour and a half journey back to Apia. As we rolled through the village of Lepa, a man waved and caught Ruane’s eye. She assumed he wanted a ride, so she stopped the car.

When the man sees us brake, he sprints 40 meters to our truck. He wears a wide-brimmed straw hat, an unbuttoned blue shirt, and a green lavalava. He’s probably in his late 40’s, but his exhaustion and haggard appearance make him seem older.

Hitchhiking in Samoa isn’t uncommon, and in the aftermath of Tuesday’s earthquake and tsunami, it’s grown much more frequent. There are lots of villagers who need a ride to the faleoloa in the next village over or men working in affected areas who need surgical masks to protect themselves from the dust and pungent stench of decaying fish and plants and pigs. Ruane stopped to give the man a short ride, but when she got out of the car, it quickly became apparent this man wanted a ride somewhere else.

Ruane speaks very little Samoan, and the man seemed to speak little English, so I got out of the car to translate as best I could. “E te alu i fea?” I asked. Where are you going?

“Up the mountain to the rest of our family,” the man said.

In an attempt to find a safe, uncluttered living space and to avoid any run-ins with any aftershock tsunamis, many families from affected areas have relocated to their plantations or maumaga up in the highlands. Temporary shelters and makeshift tarpaulin tents have been setup in taro fields. Transportation between the family’s wrecked home and the maumaga can be difficult, particularly for families who’ve lost a car.

Eventually we worked out the confusion, and when the man finally understood us, his shoulders sagged, and he turned away with a despondent air.

I looked at Ruane. It was not my truck, and I’m not allowed to drive. That said, I couldn’t find it in my soul to tell a displaced homeless man we were not willing to give him a ride. Ruane shrugged, and I shrugged. And then I turned to the man and said, “Tatou o i le maumaga.” Let’s go up the mountain.

The two men grabbed weaved palm baskets full of freshly harvested yams. The boys had bags of salvaged belongings. Then they loaded on a large wooden box. It seemed like a hope chest of perishable goods.

Since Ruane and I had no idea how to find the village maumaga, I asked the man with the wide straw brim to ride in the cab. The older man thought I was talking to him, and pointed to the scabs on his back as reason why he shouldn’t ride in the cab. Eventually, the man in the wide brimmed hat sat in the back of the cab and we were off.

I asked the man with the wide brim how his day was. “E a mai le aso?”

The traditional response to this questions is “Manuia.” Occasionally you get a “Feololo”, okay. This guy gave me a straight-up “Leaga”. Sucks. “I’m homeless!” He said in Samoan.

The road to Lepa’s maumaga was surprisingly well-paved. I noted this, saying that it was much better paved than the road in Fausaga. The man agreed.

Climbing further up the mountain, the man with the wide brim pointed: “That’s my wife!”

He climbed out of the backseat, and three Samoan women climbed in. They’d just showered and their hair was still wet. They smiled sheepishly. They pointed to a tarpaulin tent 200 meters up the hill.

As they climbed out of the truck near their tent, Ruane handed me a melted candy bar, telling me to give it to the little girl. It was soft and melted, but I held it out the window and the girl accepted with a smile.

I was glad we pulled over, if only to deliver one family up the mountain.

Pictures below. I hope you’re well. 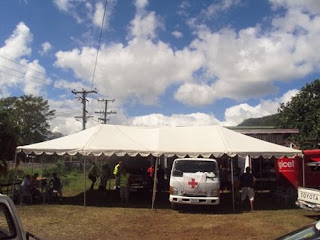 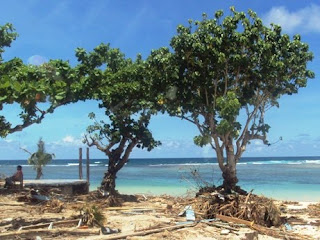 Trees with roots exposed in Lalomanu. 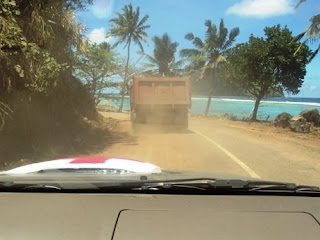 Dust is a big issue in villages on the southeast side of Upolu. The smell of decay is also becoming an issue. 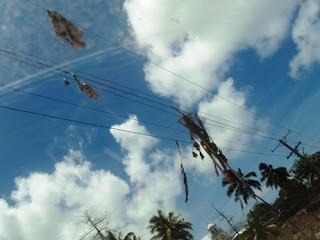 Power lines in Lalomanu with, among other things draped from them, a fala hanging.

Thanks for posting. I check all day long to see what you're reporting.

keep up the great work

We're praying you stay safe all the way from Minnesota.

Hard to believe it's been a year. You sure have gotten to experience more than most people do in a lifetime, especially with the events of this week. I appreciate your sharing it with us through your blog. Keep up the good work. You are in my thoughts and prayers. Love you.

Great posting. Thank you so much for all that you do for our country. I was born and raised in the district of Aana No2 in Upolu. Reading your blogs reminds me exactly what I remember from my childhood in Samoa when we took in our first Pisikoas into our home. I am so touched to see how you have learned to understand the Faasamoa and accept the samoan customs without judging the culture. I now reside in Mt View, Bayarea.Your blogs and experiences motivates me to go back and give back to our people. Malo le faamalosi.

You helped so many, and to take that family up to the maumaga was so kind. God bless and reward your kindness!

God reward you for your kindness!!!

Ah, that collective "we" nuance. Loved the storytelling in this post.