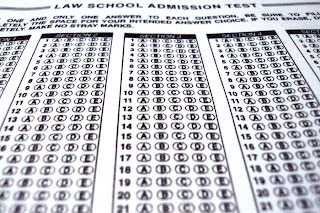 Today we had the first computer studies markers meeting where teachers from the Congrega- tionalist school system came together to grade the year 12 and 13 end-of-year exams. The marking needs to be done quickly so students can use the exam to gauge where they need the most work for the upcoming Samoan School Certificate exam (for year 12) and the Pacific Senior Secondary Certificate exam (for year 13). And in the middle of all this marking, all I can think about is the LSAT, which I’m taking in December.

After some back and forth with the Law School Admission Council as to whether I could or could not take the test in Samoa—there’s no official testing site in country—they found me a spot to take the test in American Samoa. So in 7 weeks, just days after Prize-giving (which we’d refer to as graduation or commencement in The States), I’ll be crossing the channel to fill in bubbles with two other poor souls who live within a 100-mile radius of Pago Pago.

On one hand, I’m pumped about this. Liam and I used to smirk about the strange satisfaction inherent in taking a standardized test. I like to pretend it’s a less flashy version of Jeopardy!, in which questions are hurled at me rapid-fire. I admit I come at it from the angle of showing off, which breeds pomposity, but also builds confidence.

On the other hand, math has always been my inexplicable strong suit. The LSAT has no math, and this is troubling. The closest thing it has is “Logic Games,” which Smadge assures me are not mathematical in nature, but I feel require problem-solving skills analogous to those required for math problems. PCV Max assures me “Logic Games” will be the most difficult part of the test. I’ve got my money on Logical Reasoning and/or Reading Comprehension, Max, but I guess we’ll see how things shake down after 7 weeks.

Hopefully I can harness this strange combination of stupid confidence and sustained apprehension into 7 weeks of productive study time. I’ve got my Princeton Review “Cracking the LSAT” guide, and Max gave me a slew of past LSAT exams in PDF format.

Additionally, I’m planning on giving my classes a crash course in test-taking skills before the year 9s, 10s, and 11s take their common exams and the year 12s and 13s. After all, they say the best way to learn something is to teach it.

I feel like I’ve climbed into the same boat with my students, and we’ve all got to make it across the river together. And yes, my curriculum will consist of more than simply imparting “stupid confidence.” 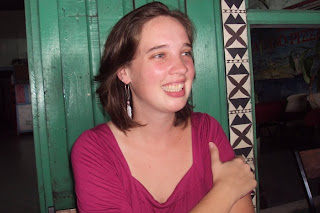 Blakey, Briony, and I had an 80s Power Dinner at Italiano Pizza tonight. 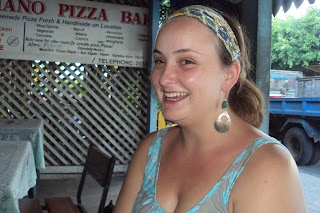 Matthew, I enjoy your blog and am very happy you survived the big one. How ironic that you should experience it there, not here. I would have left you comments before but couldn't figure out how to do it. Aunt Kelly to the rescue. Law school....hmmmmm. I will reserve comment on that aspiration. Learning about Samoa is a treat. Keep posting.
Tim Stier

Hi Matt
Absolutely love your blog. Just dropped by to wish you luck on your upcoming tests. I'm sure you'll be fine. All the best & keep it up!