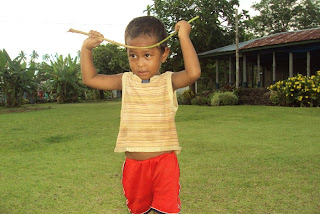 I talked to Luisa tonight and, recounting what she’d done today, she mentioned a particular store she found that had a bunch of cool stuff. I heard her talking and I understood the story, but I experienced some cognitive dissonance. Today is Sunday. How can there be shopping on Sunday? What does that feel like to go Christmas shopping on Sunday? And I was suddenly struck by this new level of Samoan-ness I’ve reached.

Phil and I watched “12 Monkeys” this afternoon. His brother called somewhere in the middle, so we paused the movie, and as Phil wandered back to his seat after hanging up, he said, “Sundays at your house are crazy. I don’t do anything. I probably haven’t taken 50 steps today.” Yeah. We’ve accepted Do Nothing Sundays as a part of life, and the thought of doing anything beyond grocery shopping is foreign. Hell, even going for a run is out of the question.

This is just another bullet point on the list of ways America seems foreign. On the eve of Phil’s departure to New Zealand, we had a conversation about ways we’ve adapted to the lifestyle here and the apprehension of going to a post-industrial Western country.

Phil noted the slower pace of life here. “I feel like here it’s okay to just sit,” he said, “But in America that’s not really acceptable. People expect you to always be doing something.” This concept is palpable in the village where we noticed on this past trip that our host families seemed to appoint a particular family member to keep us occupied.

Other adaptations are less nebulous. When my parents came to visit, I drank a glass of water while standing in their hotel room, and red flags were raised in my head. In Samoa it’s faux pas to stand and drink, a fact that’s so ingrained that it’s second nature to sit before drinking now.

Here’s another custom: when someone calls your name, and you’re out of that person’s sight, you don’t say, “What?” or “I’m here”. You make a noise like “woo”. So, for example, if Mele is sitting in the faleo’o, she might call to Akanese who is inside the house somewhere. “Akanese!” Akanese would respond “Woo!” I’ve heard that this is because there could be an evil spirit calling you, and you don’t want the evil spirit to know where you are. Now, I’m not aware of any Peace Corps who has adopted this response, but Dan and I agree we’d like to make it a habit before we leave.

And then there’s the adaption involved in the solitary lifestyle. “Do you ever talk to yourself?” Phil asked me tonight. All the time: in the kitchen, on the bus, laying on the couch. It doesn’t seem to serve any purpose, but living alone, you start talking to things. Neither of us has painted a face on a volleyball yet, but we’ve both begun to project personalities on to inanimate objects.

It sounds strange at first, but then you adapt. 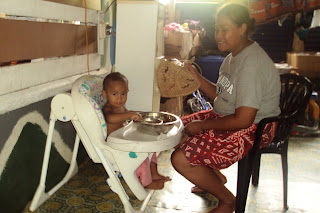 Keleme sitting at her high chair while Asolima fans her. 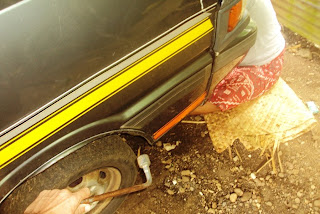 Asolima and I changed a tire. The one we put on was more flat than the original. So we put the original back. 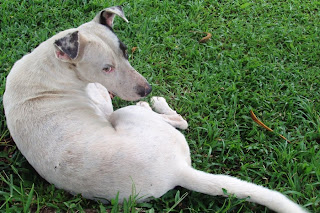 One of the family dogs, Rocky. I will devote an entire post to him sometime in the coming year. 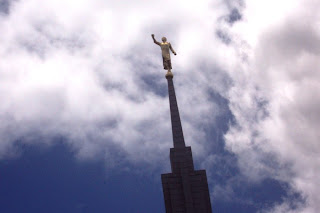 The Angel Moroni atop the Mormon temple in Apia. Asolima said the angel's horn fell off during the earthquake in September, and thieves made off with it before it could be put up again. The angel remains trumpet-less.

"Neither of us has painted a face on a volleyball yet,"...LOVE it!

Good to see Samoan Angel Moroni...I believe this is the new temple..a while back (2003 - wiki helped me with this one!) the old temple was destroyed in a fire. Apparently this is the same Angel Moroni - now trumpet-less :(.

I forgot to tell you...my older brother served as a Mormon Missionary back in 1993 I think! 2 years...rules are different for missionaries - all service, no dating, one prep day a week, teaching, serving - it's pretty hard core. I served in BC Canada. It's interesting to compare the differences between Peace Corps and Missionaries. I'm thankful there are Peace Corps too - excellent addition to quality of life...both ways!

Funny story...my Mum said that her family thought my palagi Dad was part of the Peace Corps...he let them assume that. They were married pretty quick and left the island to begin a new life. She never taught us Samoan..I regret that she didn't am was always jealous of my brother serving a mission in Samoa and having the opportunity to learn the language. I feel a little jealous of you too! Keep soaking it up!