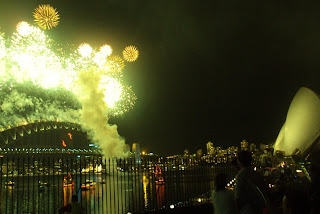 I’ve never been to see the ball drop in Time Square, so I admit I don’t have a great frame of reference, and I know I’m gonna get all kinds of flack from you New Yorkers out there, but judging from New Year’s Eve in Sydney, I can’t imagine the holiday being as big anywhere else in the world. Though New Zealand is an hour ahead and Auckland is technically the first “big city” to usher in the new year, but Sydney’s bigger and its proximity to the International Dateline is a source of civic pride.

The entire city gets into it. Port-a-potties appear around the harbour a week in advance, and an expected 1.5 million people show up to scream along with the countdown and watch an awesome display of fireworks. With those big crowds, there stands the claim that “there’s no bad seat in the house,” but certain vantage points are better than others. And so it goes Luisa and I showed up just east of Circular Quay at 9:30 a.m. Thursday morning. The grounds for our site opened at 10 a.m., and there we sat for 14 hours.

The first hour was pretty easy, but there was steady rain from 11 to 2. Once again, neither of us packed for rain, so we sat there waiting for the weather to pass.

The balmy summer climate and the big New Year party make Sydney a draw for people from all over the world. In the groups surrounding us, there were Germans, Dutch, Brazilians, Columbians, Brits, French, Americans, and more.

I spent much of the day reading my book, Joseph O’Neill’s “Netherland”. This proved to be very confusing for those sitting around me. At one point I caught the Dutch lady next to me eyeing my book suspiciously, and later the Dutch guy behind me struck up a conversation in Dutch. I stared at him blankly.

The whole thing was incredibly organized. There were ample bathrooms and semi-reasonable food vendors. There was no glass allowed, but the bar tent sold bottles of wine and champagne. $5 was built into the price of these bottles, which you could get back if you returned the bottle once it was empty. It was a clever incentive scheme.

There were 2 fireworks shows: one at 9:00 p.m., one at midnight. It’s difficult to describe the coolness of a fireworks show, so I’ll just say that it was worth the wait.

It was a long day, but I feel like it was all part of the experience. It was cool. 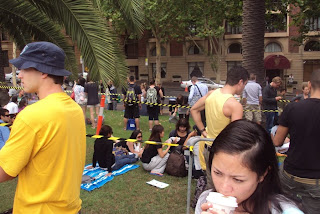 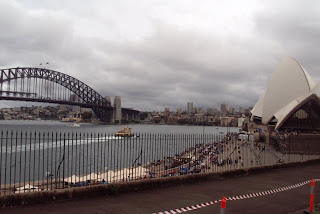 We were right behind the Opera House. This was our view. 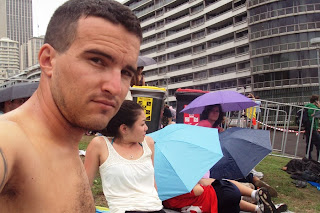 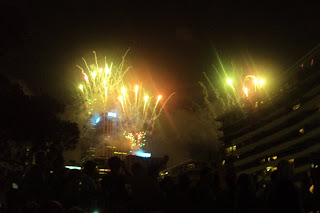 Fireworks were everywhere, it seemed. Off the water, off the bridge, even coming off skyscrapers around town. 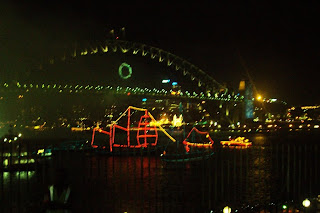 Boats in the Harbour get into the spirit. 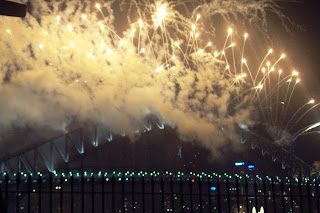 Fireworks off the bridge. 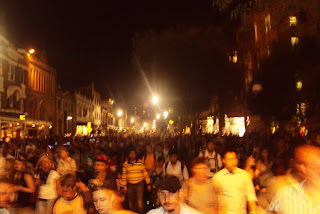 We went to The Rocks area after midnight. Getting there was swimming upstream.

Happy New Year! It's weird to think you've already celebrated and we're still over 10 hours away from midnight. I thought of you at 4 am (at the Peace service in Fremont) and realized it was 11 pm in Sydney. I hope 2010 is a great year. Love to you and Luisa!

I have checked 50 times to see if you posted about New Year's eve. I can't wait. I saw Sydney on Dick Clark's countdown! I hope you guys are having lots of fun!

I've been to times square on New Years and I can tell you just from looking at your pictures that Sydney has to be better. In New York to get a good view of the ball dropping you need to wait for hours on end but you do it in snow and freezing weather.