In Defense of My Samoan 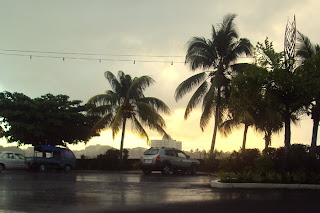 I’ll be the first to admit I’m insecure about my language skills. There are volunteers in my group that speak and understand Samoan a lot better than I do. But most of them work in schools where Samoan is spoken in staff meetings and in the classroom and in village life outside of school. They are completely immersed in the language, and as a result they’re a lot more advanced than I when it comes to speaking Samoan.

My situation is different. I am encouraged to speak English in the classroom. When I leave school at the end of the day, I head to town and a fair amount of people speak English to me. As I’ve said in earlier posts, it’s common for me to see someone on the street and say, “Mālō,” because I want to practice my Samoan, and for that person to say, “Hello” to me because they want to practice their English. I have cultivated a reasonable amount of friendships with host country nationals who live near me, and though most of them are native Samoan speakers, English is the language they prefer to use primarily.

I’ve been back to the training village 10 times this year; easily more times than any other volunteer in group 81, save for those who were dating people in the host village and were going back and forth a lot early on. I make a strong effort to immerse myself in Samoan culture and, yes, language.

They say it takes an average of 7 years to become fluent in a language, and sitting through and comprehending an hour-long staff meeting necessitates a pretty high level of fluency. Even the members of group 81 who speak great Samoan still talk about how they understand maybe 40% of their staff meetings.

I have a working knowledge of Samoan, and I can clarify concepts for my students, hold my own in a conversation with a taxi driver, barter at the market, laugh at the security guard’s jokes outside the Peace Corps office, and tell my host family stories about teaching. But in an hour-long staff meeting where I’m not the only one giving nonverbal cues, where it’s not really appropriate for me to stop a speaker to clarify a word, where for whatever reasons my vice pule speaks so softly she’s nearly inaudible, there’s bound to be information that eludes me.

And even then, as I said in yesterday’s post, I can often ask 2 people about what was said at a meeting and get 2 contradictory answers because beyond language, there are all kinds of politics and hierarchies and cultural nuances that go into a staff meeting.

Finally, most of the year our staff meetings haven’t gone on for more than 30 minutes, but they’ve been going long lately, to the point that even if they were held in English, my eyes would be glazing over by the end.

As I said at the beginning, I am insecure about my language skills (thus this post), and I recognize I haven’t made the progress others have. But I’ve tried my damnedest, and I’m completely satisfied with where I’m at after living in Apia for a year. Sure, there are still times when I’m caught off guard, but I think the most fluent of volunteers would report a constant flow of surprise. I will continue to maneuver through life, school and otherwise, as best I can. 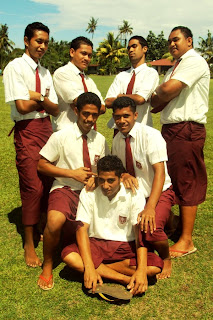 The Year 13 boys wanted to take a group photo, so I suggested this background. 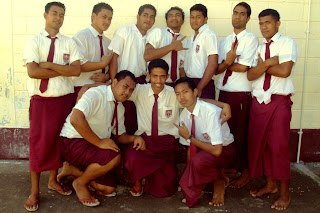 Then they suggested this background.

Congratulations on making an effort its much more than a lot of others who even with samoan parents make NO effort to learn their own native tongue and then dont even start on the ones who can speak but try and pretend that they were never taught you know the ones...often reffered to as 'fia-palagi'...we have an uncle in our family who was a PCV in samoa in the 70s(i think ... anyways) his comprehension of samoan language and customs is way superior to that of his spouse who IS samoan... you do the best you can what more can be asked of you?
-L.Sydney

Hmm new languages is best absorbed as pillow talk Matt, so get busy in 2010.

Matt, I gauge one's language ability to communicate with a taxi driver. If the cabbie can get you from point A to point B and the fare is fair, then you have a grasp of the language! And that goes for American cab drivers too! If you're in Thailand, the meters are not broken. Flag another cab.

The best way to learn is to find a trustworthy samoan friend who doesn't speak English.Hang out with him make conversations trust me it works

Hi Matt, I just wanted to comment and say that I bet your Samoan is great! And let people say what they will about speaking English all the time, but honestly when you allow people to practice their English with you, you are giving them a gift. So whatever, don't let that comment get to you because your real goal in Samoa, and in the PC, is not to learn a language anyway, but rather to make a difference in the lives of your students and in the community. And from what we read you seem to be doing a damn good job with that!

Actions speak louder than words. So your time in Samoa doing something proactive is more appreciated than how much fa'asamoa language you've perfected. As long as you're not snobbing what local people give/do for you then your language skills are not that important. Trust me, I'm Samoan, don't speak it word perfect, but my Mother always gives me positive feedback that unlike my cousins I'm not a snob (smile lots) & I'm great at doing 'feau' :)

It's Always Sunny in Nevada! said...

I think your Samoan is AWESOME!!! Considering you've only been in Samoa a little over a year, you know a heck of a lot more than probably half of the Samoan population here in the States. True story. LOL Fully enjoying your blogs- my favorite part is when you say 'you're jealous' when something is just not quite right...classic! Take Care Matt!You're doing a WONDERFUL job!!

I was a volunteer in Samoa in 1980-82. I discovered your blog a couple months ago and have enjoyed reading it. Other than technology, doesn't seem like much has changed there in 27 years.

On the language issue - like you, I was surrounded by English speaking Samoans, so practicing the language was tough. I found that over time, my speaking skills deteriorated, but my comprehension improved. I could follow most conversations, but couldn't join in. Consequently, people didn't think I knew the language at all and felt free to say whatever they wanted in front of me, assuming I wouldn't catch on. I learned some very interesting things that way!

I would say a few trips to Savaii will do the trick. Speaking to Akenese and Keleme will help too. Kids don't discriminate.

Best way to learn Samoan is to hang around Samoans who can't speak English!! HONESTLY that is the only way. Otherwise, those samoans will always speak english to you.

However, it is very hard to do this in Apia where everyone speaks english. lol