And Out Come the Wolves 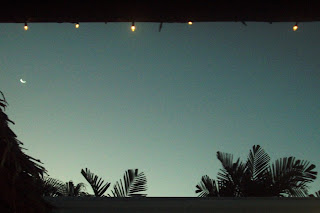 Teaching middle school in Oakland, my road rage faded away. There was enough stress and unadult- erated rage during the school day mere traffic spats seemed insignificant. Normally in The States I was an angry driver, mad in traffic, irate when cut off. But during the few weeks and months I taught middle school, those emotions were dwarfed and quiet. And yet after I quit they came back in unyielding fervor. And now, living in Samoa, that anger has been channeled toward the dogs.

Though today is the first day of summer and nearly the longest day of the year, darkness fell before I left Blakey’s this evening. With campus empty and Christmas on the horizon, Blakey, Erin, and I got together for dinner, cookies, and wine. But all good things must pass, and as the evening came to an end, I slung my backpack over my shoulder and headed out the door.

The path from Blakey’s house to mine is relatively short; at most a fifteen-minute walk. But as I trudged down the hill on the crudely paved sidewalk, the LED flashlight of my cell phone lighting the way, the dogs inevitably began to bark.

I lived just south of downtown Los Angeles throughout college and I heard my fair share of gunshots in the distance and helicopters above and dogs barking in the distance. And so I take it all in stride.

And then, quiet and out of nowhere, a real dog is in my face. A German shepherd, angry as hell, barking louder and louder, and before I know it within a threatening distance. In less than a beat, the dog is within 3 yards of me, barking loudly and cautiously continuing its approach.

At first I’m rattled, and all I can do is front. I reach into my pocket, my cell phone is the first thing I feel, and I immediately pretend to throw it at the dog, making grand and violent gestures like a stage performer.

The dog is unconvinced, edging even closer, barking the whole time, his threatening teeth glisten in the starlight. I begin to scream words, feigning anger before it comes, and I crouch down to paw at the gravel in my path hoping to find something to throw at the dog. I find nothing, and the dog inches closer, now less than a yard away.

I throw my cell phone at him. Fuck you, Dog. The last ditch effort riles the anger from the depths of me, and I verbally come at him with all I’ve got. A string of expletives follows. Hell, I beat my chest.

The dog lets up, impressed with my newfound belligerence. My sacrificed cell phone has bounced behind me, and I retrieve it, popping the battery back into place.

By now, the neighboring dogs have heard the scuffle, and echo their own barking. I shine the LED light along the path and seize four rocks of sizable girth. I’m ready now.

I’m almost home, there are no more than 200 steps to my gate, but I hear the dogs, and I’m ready. My shoulders ride up high, and my defense edges past the midfield line as I call out to their barks, mocking them, inviting them out. The rock in my hand slides up next to my index finger. Come and get me.

Across the street a dog barks in a driveway. I hurl my rock, but the dog takes off before I release. He is temporarily silenced.

I walk through my school’s gate, still clutching my ammunition. I hold it securely in my hand until I reach the door to my house. I’m home and safe, but I can feel the blood pumping through my ears. It will be a while before I cool.

And so here I am. I hope you’re safe. Pictures below. 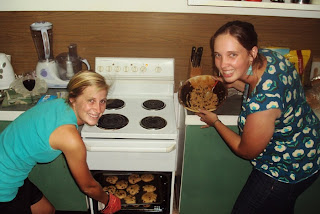 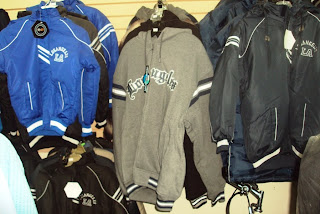 A slew of Los Angeles paraphernalia is available at the Loko Samoa store. 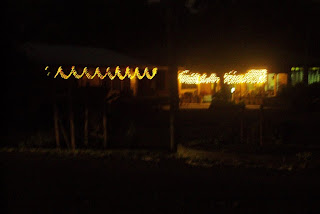 This house across the street from my school has a nice display of lights.

Merry Christmas, Matt. I enjoyed the picture of Erin and Blakey baking cookies. I know I've said this before, but, I really do enjoy reading your blogs about Samoa.

Yeah Matt, now you gots it, always walk around Samoa with a trusty stick or a couple of rocks to discourage wayward dogs.

This is your most exciting blog yet. I agree with the above, you must have rocks with you at all times.

A rock and a stick the next time. That Erin is cute.